The R&A today formally announced that Jack DAVIDSON and Robin DAWSON had been added to the initial 19-man Great Britain and Ireland (GB&I) Walker Cup squad that was announced in January.

GB&I Captain Craig Watson said: “Jack and Robin have been playing exceptional golf recently and their invitations to join the squad reflect the excellent results they have achieved so far this year.

“They have played their way into contention for team selection and there is still the opportunity for others to do the same as we move into the domestic season.”

The squad will have their first formal gathering at Royal Lytham & St. Anne’s GC ahead of the Lytham Trophy which starts on 5th May.

This decision had already been widely reported elsewhere and I also referenced its inevitably in an article I wrote on 2nd April 2017 on this website. 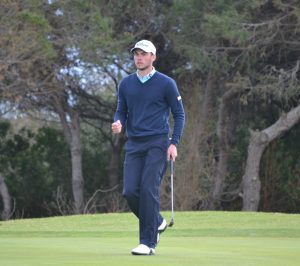 The R&A have today announced an initial Great Britain & Ireland (GB&I) squad for the 46th Walker Cup match which will take place on 9-10 September 2017 at the Los Angeles Country Club.

GB&I Captain Craig Watson said “We have identified a strong group of players who are all in contention for a place on the team and we will be monitoring their performance and results over the coming season. We will also pay close attention to the progress and form of players who have not been included in this current squad as they also have the opportunity to play their way into contention for the team selected to play the USA in September.”

The following 19 players were included in the initial squad: –

The current rankings of the selected players are shown in the table below: – 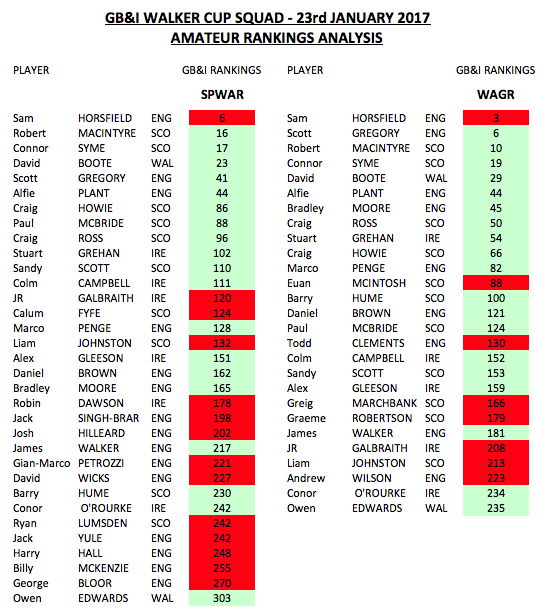 As the above rankings clearly show the GB&I Team would have been much stronger with Sam HORSFIELD in it. However, his exclusion makes clear he is intending to turn Pro shortly after the US College season ends and certainly before the match in September. It’s a shame he couldn’t hang on a little longer – his golfing CV will be all the poorer for having never played in the Walker Cup.

Whilst the rankings mean little in the heat of match play golf the task facing GB&I later this year is emphasised by the fact that the United States currently has 9 players in the Top 20 of both the SPWAR and WAGR.

I had been unsure as to whether a GB&I Walker Cup Squad would be announced for the 2017 match.  Whilst Past Captain Nigel Edwards had announced one ahead of the 2015 home match at Royal Lytham he had previously been dismissive of a Squad for the 2013 away match at the National Golf links of America.

Speaking in 2013 Edwards said: “We’re not picking a squad this year simply because it works well when the match is played here, but with the match being in America there is no point bringing guys together to play a golf course that would bear no resemblance to the real thing. As for traveling over there for a site visit with them, the schedule is so busy that it’s almost impossible to get the guys together, especially with some players in college golf. Besides, often we would pick a squad in the past, and some of the guys would turn professional and drop out. Others playing in college golf would not be named in the original squad, then would play well in the winter and would look conspicuous by their absence from the squad.”

GB&I squads, with team gatherings in the build up to the match, were first introduced in 1995 to try and arrest a series of losses. The improved team spirit and better prepared foursome pairings have contributed to an upturn in GB&I fortunes over the last 20 years.

With no team practice sessions announced by The R&A today one may question what new Captain Craig Watson has got out of showing his hand in this way. Of course it provides some match PR and enables us to see how our leading players react to their inclusion or exclusion. Despite this I am sure their will be some informal dinners ahead of the Lytham Trophy and / or Brabazon Trophy events to start the team building.

For away matches, like Nigel Edwards suggested, I think it may be better to leave any formal statements until the actual team announcement. Then gather a little earlier so that more preparation is done immediately before the match. With the US Amateur Championship being played literally down the road in Los Angeles a few weeks before the Walker Cup the golfing calendar would certainly have appeared to suit this approach in 2017.

Either way with a GB&I Squad now announced the match is very much on the horizon. I am certainly looking forward to following the twists and turns of selection over the next 7 months.