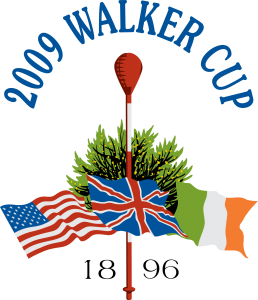 The 2009 match saw a change in format for the first time in 46 years. It was decided that the Day 2 Singles would now involve all players with 10 games instead of the previous 8 being scheduled.

Merion G.C.’s East Course hosted the match with many commentators interested to see how the relatively short course on a small piece of land held up with the 2013 U.S. Open lined up to follow on behind.

Buddy Marucci, a member of Merion, returned as U.S. captain. Marucci was unable to defend his U.S. Senior Men’s Amateur Championship title, won at Shady Oaks C.C. in 2008, because the 2009 event was being played at the same time as this Walker Cup match. I am sure a second win for Marucci proved to be acceptable compensation to him.

The USGA selected eight of their players in early August with the final two coming on board after completion of the U.S. Amateur later in the same month. Bud Cauley, Rickie Fowler, Brendan Gielow, Brian Harman, Morgan Hoffmann, Adam Mitchell, Nathan Smith (30) and Drew Weaver were in the first wave.

Cameron Tringale and Peter Uihlein joined this first group later on after they reached the 3rd Round and Quarter Finals of the U.S. Amateur respectively. Uihlein, the son of Wally, CEO of Titleist, was a controversial pick with Dan Woltman considered to have a much stronger 2009 golfing resumé. However, such criticisms soon quietened down when Peter joined Rickie Fowler in delivering an unbeaten 4-0 match record.

Tim Jackson (50) and Ben Martin, the runner-up at the U.S. Amateur, were named as 1st and 2nd alternates for the U.S.

Shane Lowry was included in the original GB&I 28 man training squad announced in February 2009. However in May 2009 he won the Irish Open on the European Tour, defeating Robert Rock in a play-off, and immediately turned pro.

19 year old Welsh GB&I squad member Ben Enoch, younger brother of Rhys, was tragically killed in a car crash in Herefordshire on 30th April 2009 whilst travelling from the family home in Truro, via a stopover in Cardiff, to play in the Lytham Trophy. He had been due to follow Rhys and commence a golf scholarship at East Tennessee State later that Autumn.

Not in the original squad Eamonn ‘Stiggy’ Hodgson, who was 19 and stood just 5 foot 4 inches tall, played his way on to the GB&I team during the summer of 2009. He picked his nick name up after falling into a skip at the local refuge tip when he was a small boy, finding a discarded 7-iron and then using it to take up the game. Stiggy refers to the lead caveman character in the children’s book ‘Stig of the Dump’ by Clive King which was adapted for television by the BBC.

The opening ceremony was cancelled due to high winds and torrential rains.