The 1954 U.S. Amateur champion Arnold Palmer had been expected to represent USA but ultimately decided to turn pro in November that year so his 6 month probationary period could be completed before most of the main PGA Tour events in 1955 came round.

Bill Campbell, runner up to Australia’s Doug Bachli in the Amateur Championship at Muirfield in 1954 and just 32, captained USA who only picked nine players for the trip. Campbell, who was the only member of the team to have previously played St. Andrews but had badly burned both his hands in an accident with a candle at Christmas, chose not to play himself during the match.

Robert Sweeny Jr (43), who had lost the U.S. Amateur to Palmer in 1954, was a notable omission from the USA team. At the time this was attributed to the USGA disliking the fact that Sweeny had been named as the third party in a recent divorce suit.

On the eve of the match students from St. Andrews University removed all of the flags and relocated a number of tents, scoreboards and signs. It took the greenskeepers three hours on the first morning to return everything to its rightful place. 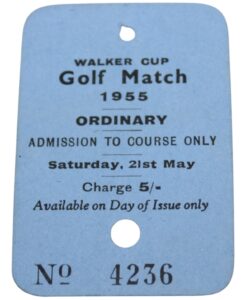 Jimmy Jackson, the 16-club day 1 villain at Kittansett, was one of the stars of the USA team in St. Andrews delivering two comprehensive wins. Campbell subsequently admitted that he nearly dropped him from his foursomes line up, his form being so bad in practice.

Ronnie White’s unblemished singles record was ended by Harvie Ward Jr, probably the best amateur in the world at that time. White was by now a busy Lancashire solicitor with a young family. He played few major events in 1955 and didn’t attend that year’s trials being very much selected on past glories. White never played international competitive golf again.

Ian Caldwell was 3Up with four holes to play in his singles but was a little fortunate to secure his point in the end. He lost the 33rd and 35th holes and then proceeded to miss a short putt on the home green. Fortunately for him Dale Morey 3-putted from three yards when a half was in sight.

The 1955 Walker Cup was the first R&A event that the BBC televised paying £150 for the rights. The same sum was paid by the BBC for that year’s Open which was also played at St. Andrews on 6-8 July. Four cameras were deployed; one on the 1st tee, one near the 17th green and two on a 60 foot tower by the 11th where action on holes 6-13 could be captured. Henry Longhurst and Michael Henderson provided the commentary.