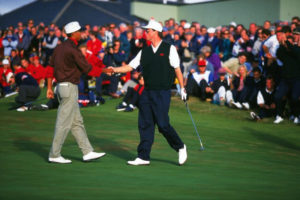 Tiger Woods and Gordon Sherry were the two stars of this match. At the time they were respectively the golden boys of USA and GB&I amateur golf.

A 20 man GB&I squad was selected in 1994 and, led by the diligent Captain Clive Brown, worked together in the year leading up to the match.

The GB&I selectors chose to pick eight players early for this match and leave two places until the last minute. When Englishman Gary Harris wasn’t picked in the first group he announced he was turning pro. Gary Wolstenholme, who won the British Mid-Amateur Championship, and Jody Fanagan ended up gaining the final two places. Nine of the team came from the initial squad with only Graham Rankin able to play his way on in the preceding months.

The weather was generally poor for most of the match; a cold wind blew and it rained almost non stop, i.e. perfect conditions for the GB&I team to spring an upset.

Rankin lost both of his games on Day 1 before injuring his wrist practicing in the evening and having to withdrawal.

Gary Wolstenholme beat Tiger Woods in the Day 1 Singles raising his profile immeasurably in the process. Forgotten over time is that Woods exacted his revenge on Day 2 but not before GB&I and claimed a famous victory.

Perhaps unfairly as the following day’s team sheets are handed in on the prior evening USA captain Downing Gray was criticised for back loading his line up throughout the match and particularly on Day 2.

Padraig Harrington, by then 24, turned pro immediately following the match in Porthcawl having played in three successive Walker Cups.

“There were a group of about 20 of us who played there twice before selection, then they picked eight of the team after the European Championships in Belgium. They then selected Gary Wolstenholme and myself three weeks before the matches. It was more thorough than before, they put a lot of effort in and have continued that since.” – Jody Fanagan, National Club Golfer, August 2019.

“That was the first year that we could bring our own caddies. It was the same with the other lads and that was very significant.” – Jody Fanagan, National Club Golfer, August 2019

“Clive (Brown) was a lovely guy, he gave us everything that we wanted and he managed us all pretty well and told us that we were all there on merit. The pairings kind of looked after themselves. They were all in place from the Home Internationals.” – Gordon Sherry, National Club Golfer, August 2019

“When I came down the last against Tiger there must have been 14,000 people. You are playing in front of TV cameras and being interviewed all week. It is fantastic. It was pretty much a case of let’s just do our own thing. Tiger used that to try and intimidate his opponents. He took one look at the course and though ‘what have I done ?’ It was a box he had to tick but he was doing it very begrudgingly. The course wasn’t in the best shape and they had disease on the greens. On the 1st tee you could see his wall was up. I still said good shot and tried to have a conversation, particularly on the second day, but he just wasn’t interested. People forget he beat me on the second day.” – Gary Wolstenholme, National Club Golfer, August 2019

“After the matches finished Tiger didn’t come down for dinner as he wasn’t very well with some food poisoning. He had never played links golf before and it took him a while to get his head around it. Thank God he wasn’t ready for it but he was a good lad.” – Jody Fanagan, National Club Golfer, August 2019