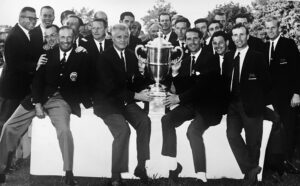 Carr captained GB&I in Baltimore but chose to not to select himself for any of the games.

The 1965 match was one of the best in the history of the Walker Cup. GB&I led USA 8-3 after Day 1 and then 10-5 after the Day 2 Foursomes. Unfortunately they were unable to secure the two Singles victories they needed from the remaining eight games to secure a second win. The matched was tied for the first time 11-11 but only after England’s Clive Clark had holed a 40 foot putt to halve the final game on the 18th green.

A frustration to Carr would have been that his four victorious Eisenhower Trophy players, Bonallack, Foster, Lunt and Shade, all lost their final day singles games. This was a match where untried youth prospered for the British. Clark, Cosh and Townsend lost only two of the 12 games they participated in and indeed Clive Clark was the only undefeated player on both sides.

Nevertheless this was still deemed a good result for the tourists. Previously no British men’s amateur or professional team had come close to achieving a respectable loss let alone a draw.

It was generously agreed by the USGA that the trophy would spend one year in America before being sent over to St. Andrews in 1966 a year ahead of the next match at Royal St. George’s.

Peter Townsend would go on to become a Ryder Cup player for Great Britain, playing in both 1969 and 1971. As the 1969 match was halved at Royal Birkdale he is the only player on both sides to have played in halved Walker Cup and Ryder Cup matches. He played in every series in both matches and also enjoyed an overall winning record in both – WC Baltimore 1965 P4 W3 H0 L1 and RC Birkdale P5 W3 H0 L2.

The crowds in Baltimore were estimated by Pat Ward-Thomas, writing in The Glasgow Herald, to be in the region of 3,000 per day.