The Walker Cup is a two day golf match played between 10 man teams of amateur golfers from Great Britain and Ireland (GB&I) and the United States of America (USA).

On both days there are four foursome matches in the morning followed by a series of singles in the afternoon; eight on Day 1 and ten on Day 2. All matches are played over 18 holes.

An individual match win earns one point. A halved match a half point for both sides.

As there is a total of 26 points available a team must secure at least 13.5 points to win the match outright. The team holding the cup can retain it by winning 13 points.

The respective Team Captain’s submit their foursomes and singles line ups together the night before each day’s play. 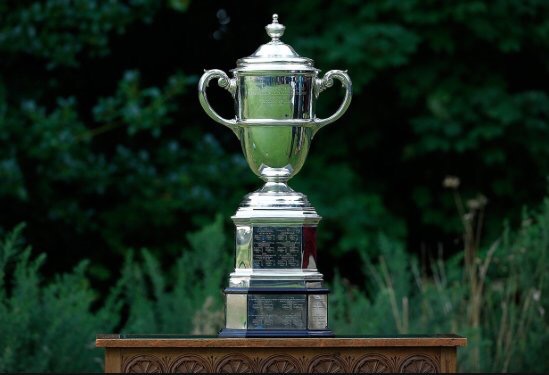 2021 – Due to a serious virus outbreak in the days preceding the match the use of alternates / reserves was permitted on an exceptional basis. Alternates were unusually on site due to the perceived COVID-19 pandemic risks.

2009 – Ten singles were introduced on Day 2, therefore ensuring every team member has to play. This was the first format change in 46 years*.

1963 – All games were reduced to 18 holes allowing 4 foursomes and 8 singles to be played on both competition days.

1926 – After the first three matches were played annually a move to a biennial contest was agreed. The cost and time, incurred largely by the players in the 1920’s, simply proved too great for many to absorb.

1922 – The original format consisted of 4 foursomes on Day 1 and 8 singles on Day 2.  All games being played over 36 holes with points only being awarded for outright victories.

*Heavy rain ahead of the 1993 match saw a revised format adopted to make up for lost time on the morning of Day 1. 10 singles were played on the afternoon of Day 1 with four foursomes and another 10 singles on Day 2.