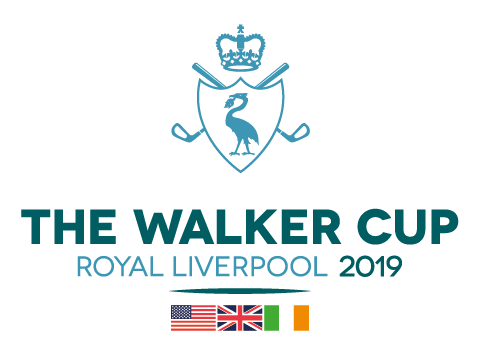 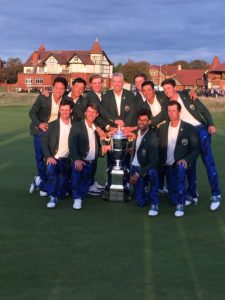 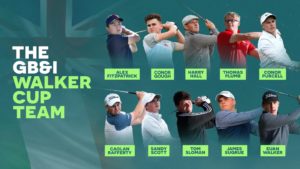 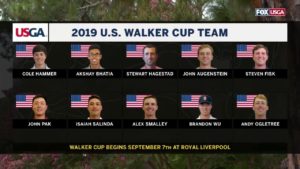 There is more information on how both teams came to be selected further down this page.

You have all the talent, there’s nothing you lack
Your destined to be the next Tiger or Jack,

Your the scholarship kid, the campus hotshot,
From your winning ways, your the best of the lot,

But I ask you to pause, and search for you soul,
As your still in a kind of tiny fish bowl,

What are your goals, you must be exact,
It’s just with yourself that you make the pact,

What is it to make it, one win or twenty,
If it’s money you seek, then how much is plenty,

At the end of the day it’s only you who must care,
To set the right standards, it’s your own do or dare,

I too was a hit, an amateur hero,
I turned out to be a big time pro zero,

In the Eighties I saw success running wild,
So for a pro failure I’m a true poster child,

So please I implore you to chart out your course,
Follow your dreams but don’t have remorse,

If you goals are illusive, just limit your time,
Don’t be playing at forty on a quarter and dime,

To those that don’t make it your days still look bright,
So long as you don’t prolong a bad fight,

For the next group of heroes there’s nothing to teach,
You’ll accomplish those things well beyond others reach,

One day in the future you’ll tap Rory’s shoulder and say,
‘You played really well back in your day’,

You’ll stand up and say ‘I’ll take Koepka down’,
You’ll be anxious to say ‘I’m the new kid in town’.

Hoylake, as it is also known, hosted the 29th Walker Cup match in 1983 and was the venue for a first match between these two sides, played ahead of the Amateur Championship, in 1921.

The 2019 staging coincided with the Club’s 150th anniversary. 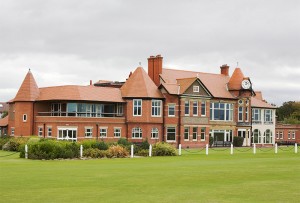 The championship course measures 7,290 yards and has a par of 71. 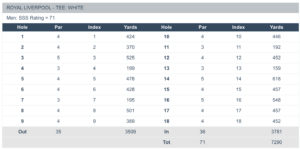 Speaking ahead of the match GB&I captain Craig Watson said of Royal Liverpool “I think the course is perfectly suited to match play. You’ve got that opening hole which is going to be won or lost in a lot of matches and then you’ve got two par 5’s close together near the end, when momentum can change quickly. It’s going to be perfect for the Walker Cup.”

The R&A announced the 10 man team for the 47th Walker Cup match on Monday 19th August. The following players were selected: –

Players Who Missed Out

Here is a short list of the GB&I players I believe can consider themselves unlucky to miss out based on their Scratch Players World Amateur Ranking (SPWAR) and World Amateur Golf Rankings (WAGR).

GB&I captain Craig Watson said: “It has been a very difficult decision to select ten players for Great Britain and Ireland from a strong squad but we have been very impressed with the results of those we have picked and we believe they will give us the best chance of regaining the Walker Cup against a strong American team.

“The Walker Cup is a fantastic opportunity for these amateur golfers to demonstrate their talents on the big stage and it will be an experience that will remain with them for the rest of their lives. We are looking forward to the match at Hoylake and I’m sure the players will give it their very best to win.”

The following table showed all of the GB&I players who enjoyed a Top 20 Scratch Players World Amateur Ranking or World Amateur Golf Ranking on the day of selection. As you can see Jones and Burnage both enjoyed positions in the top 10 of both of these rankings. 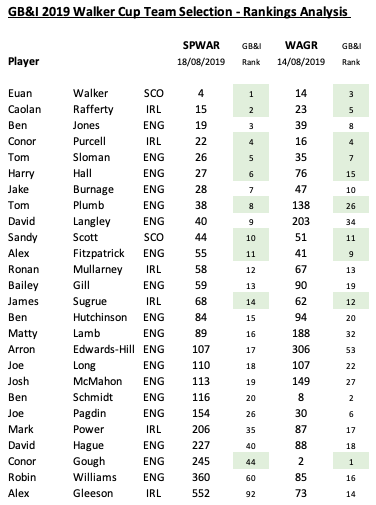 On the 22nd July 2019 The R&A announced that their initial GB&I Walker Cup Squad had been reduced to 16 players.

The following players then attended a second formal training session on 23-24 July at Royal Liverpool G.C.: –

As there is understandably an unwritten rule which states a home winner of The Amateur in the year of a match will be selected for the GB&I team we knew James had secured his place with this victory.

A 26 Man GB&I Squad Is Announced

On 24th April an Initial GB&I Squad of 26 players was announced: –

A first practice session was then held on Wednesday 1st May at Royal Liverpool G.C. with 18 players attending. 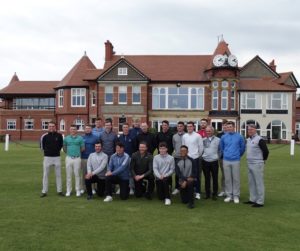 “There are 7 votes, Captain’s don’t get a vote. You get substantial input.

I kind of pointed out that the WAGR was really great science for the players playing in the same tournaments but it inflated the juniors a little bit and was inconsistent with some of the mid-amateurs. I offered those opinions.

We missed out on one player we really wanted with Chandler Phillips because Andy Ogletree won the U.S. Amateur. The Competition Committee really allowed me to recruit the team I was focussed on and had monitored. It was basically a combination of all their performances as well as their WAGR rankings.

Shortly after the conclusion of play at the U.S. Amateur Championship on 18th August 2019 the U.S.G.A. announced the remaining 7 members of their 2019 team. These were: –

The WAGR ranked Hammer 1st, Bhatia 4th and Hagestad 5th as the three leading U.S. players on their list at the end of Week 29.

Players Who Missed Out

Here is a short list of the U.S. players I believe can consider themselves unlucky to miss out based on their Scratch Players World Amateur Ranking (SPWAR) and World Amateur Golf Rankings (WAGR).

Here is a list of the Summer 2019 notable U.S. events and their winners which will have influenced the final team selection:-

Players Lost To The Pro Ranks

June 2019 saw three initial Walker Cup squad members turn pro. These were Will GORDON, Bryson NIMMER and Matthew WOLFF. Wolff had just won the  NCAA Division I Championship Individual title and was therefore a particular blow. Gordon and Nimmer both had 2019 Mackenzie Tour membership via Q-School and were unwilling to let these playing opportunities pass by.

* Davis RILEY – Hattiesburg, Mississippi – withdrew from the practice session on 25th November following his decision to turn professional. He was replaced by Trent PHILLIPS.

Stewart HAGESTAD was the only returning member of the 2017 USA Team who attended.

The USGA tweeted a gallery of photos from the session on 18th December: –