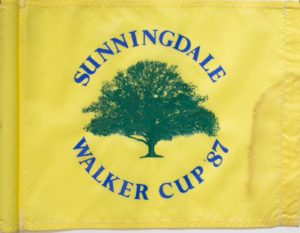 Sunningdale was the first inland course to host the Walker Cup in GB&I, The R&A previously preferring links venues as it does with The Open.

The 1987 match was the last in GB&I where spectators were allowed entry to the course free of charge.

Fred Ridley, still only 34, led the USA team. Whilst the warm, calm weather and pristine course no doubt helped the Americans to acclimatise in truth they were generally superior to their opponents in all playing departments.

Leading 12-4 after the Day 2 Foursomes USA had already retained the trophy even before a shot was played in the afternoon Singles.

Trying to be positive and resistant to any change in the Walker Cup format Raymond Jacobs reporting on the match in the Glasgow Herald said; “There is no need, after one particularly devastating defeat to adopt the gloomy resonance of the Irish reporter’s verdict on a dismal performance by his country’s swimmers: “It was a miracle no one drowned.””.

Sadly this was the last Walker Cup match held in GB&I adjacent to the Amateur Championship. The 1987 Amateur was staged at Prestwick G.C. / Prestwick St. Nicholas G.C. between 1-6 June. All of the U.S.A. team travelled to Scotland to play in the Amateur as well as captain Fred Ridley and a number of past captains.