Up to and including the 2021 match 312 different players have been selected to represent Great Britain & Ireland (GB&I) in the Walker Cup.

Three GB&I golf clubs have provided four players for the team in the history of the match.

*I believe as many as 19 other players were members of Sunningdale when they played in the Walker Cup but that Sunningdale was not their home club at the time based on their Amateur Championship entries of each era.

Below is a selection of the most notable former players, in terms of both appearances and subsequent achievements in the game.

I have written profiles on those players who are underlined. Click on their names to be taken to these. I have also collated some of their subsequent comments and reflections on the Walker Cup.

“I’ll tell you what I want to go and see this year, at LA Country Club, is the Walker Cup.

And I didn’t know, for any young person, it’s amazing how when you’ve played these events, you’ve represented your country and you’ve played a Walker Cup, or an Eisenhower, and been on a world stage at amateur golf it actually resonates and it stays with you through your career whether you end up playing professional or not.

Anybody who is any young amateur who’s thinking – nah, no I am not interested in playing this stuff, I want to turn professional. College – Professional. Just hang on a second. It matters. It means something. It can elevate your professional career even though you may not realise it at this moment.

It’s a cool thing and I’m really glad I got to… not just be part of a Walker Cup but part of a cool one. It was a classic. Yeah it was awesome. Nairn. Brilliant. I had some great moments. I played John “Spider” Miller in the singles and Luke (Donald) was my partner in the foursomes.”

“…for me to play Cypress Point, which I had never heard of; I had heard of Pebble Beach, it was such a wonderful place.

It was a great honour and great privilege to play for the GB&I team. We had a great team and it was great fun. There was a great sense of pride, that you had achieved something.

Paul Way and I had always played foursomes together. We just thought on Saturday morning that we were playing together. We had never lost together playing for England, and it was a shock to us that we weren’t paired. I was playing with Peter McEvoy. I can’t remember who Paul played with but we both lost. Paul and I were put back together on Sunday morning and we beat Hal Sutton and Jay Sigel, who were the top two players on their team.

“It meant enough to postpone turning pro and wanting to play my second Walker Cup at Sea Island. For me it was a big deal to make that team and represent my country. I think it’s the pinnacle of amateur golf.” 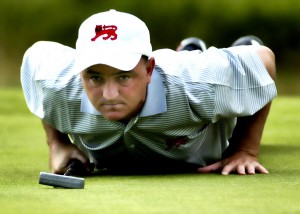 “To this day @WalkerCup is one of my best experiences as a golfer.”

“The reason I played three Walker Cup’s is I didn’t think I was good enough to be a pro. I did night school and did accountancy with the idea of hoping to be in the golf industry. Only after seeing these guys in 1993 turn pro. and some of them get out there I kind of had the attitude ‘if these guys are good enough’ then I think I can beat them guys so I’m going to turn pro. My ambition was to be a journeyman pro for five years, come back to Ireland and have that on my CV.”

“When I had Tony Disley ring me, Chairman of Selectors for the Walker Cup, tell me I had made the team I was overjoyed. It was a fantastic moment.

We started the week off at St. Andrews. We played Kingsbarns with Sandy Lyle. He played 6 holes with each of us. We then had dinner in The R&A clubhouse.

Next day we flew private jet from Dundee to Belfast. It was at Royal County Down. We started off playing a number of practice rounds together. It was a unique experience. We had a good team room, good chat. It was great to have the BBC filming us and interviewing us. It was a phenomenal time.

“Probably the biggest regret of my career is my individual Walker Cup record, which is exactly 33%. Including the Walker Cup my overall record was 79%, that’s over 200 international matches, so the rest of it is 85%.

My singles record for England is better than anyone’s, but my record in the Walker Cup is won 5, lost 11, halved 2. It’s something I hate myself for because there are few mitigating circumstances. I failed. I put it down to expectation level – when I played in my individual event my expectation was to win.

But I was as guilty as anybody in the context of not going out with the right attitude; in the Walker Cup I just didn’t have that same conviction”

“I played in one Walker Cup (at Portmarnock in 1991) and the course was baked. We had seven days in the mid-20s with a maximum of 2-3 mph winds. That obviously suited the Americans. We would have loved it a bit more blustery and cold.

“The crowds sold out and it was a great week. It was the first time the competition had come to Ireland. The whole country invested in it and it was a huge deal. It was the biggest driving force in my career in 1989 to 1991 to make that team.”

“We had four Irish on the team with Garth McGimpsey, Liam White, Padraig Harrington and myself. Padraig was a late addition to the team after coming strong late in the process. He was a ferocious competitor and that’s how he made the team. I always enjoyed playing with him.”

“One of the biggest challenges early on in my career — and honestly, one of the most humbling experiences — was assuming the responsibility of playing for something bigger than myself.

My last tournament as an amateur was the 2007 Walker Cup at Royal County Down — a course I had played many times as a kid. Given my familiarity with the course, along with my form going into the event, I was seen as a leader of our all British and Irish team. That was quite an honour.

By the end of the weekend, though, I was more disappointed than I had ever been.

My teammates and I lost to the U.S. by one point. After contributing only 1½ points out of a possible four, I felt like I was responsible for the outcome. I was disappointed not only in myself, but also because I felt like I’d let my teammates down – and that was disheartening. I had never really experienced that feeling before.”

“(Peter McEvoy and I) played together in the St. Andrews Trophy and had done well and Peter said to our captain Geoff Marks that we were a good pairing. Peter did his best to mentor me and took me under his wing a bit to make the team. The Walker Cup was the pinnacle of your amateur career.”

GB&I took an 11-5 lead into the final day singles where O’Connell was drawn against Phil Mickelson.

“I looked at the scoreboard on the 12th and we were down in every match. (Geoff Marks) said it looked like if I were to win we would win, if I tied we would tie and, if I lost, then we lost! So that made it pretty clear in my head but I wanted to know. I was 1-Down to Mickelson at the time. I won the 17th and Phil made a 10-footer at the last for par and he gave me a 2.5 footer which I was quite surprised that he gave me – there was a good chance I would have missed it.”

It came down to the final match – Jim Milligan v. Jay Sigel.

“We didn’t go on to do what we wanted as pros, most of us anyway, but had we lost it would have been a huge disappointment, We were a strong team and we weren’t surprised that we had won. We didn’t think of ourselves as underdogs.”

“I love it, once you have played in the Walker Cup you will always be a Walker Cup player.”

“We’d lost the foursomes, 4-0, and I wasn’t playing in the morning, so I was early to the tee in the afternoon, and I was going to be the first to hit, I just teed up my ball before the introductions started. As it turned out it was the best move I ever made. I was so nervous when I went up to hit my shot that it was just as well the ball was already teed up – I’d never have been able to keep my hand steady enough when the time came. I stood over it and everything was moving and I thought, ‘Please God, just let me make a connection here.’ I got it away – it wasn’t a very good drive – but it was straight enough.”

– Craig Watson speaking with Brian Keogh about his 1997 appearance at Quaker Ridge GC in New York in GlobalGolfPost.Com, 15th May 2017