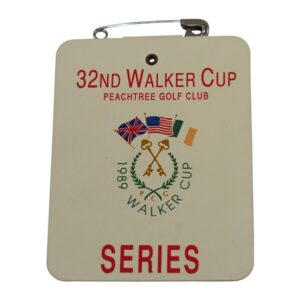 GB&I won the 1988 Eisenhower Trophy in Sweden so confidence was high going into the match. Peter McEvoy and Garth McGimpsey, both of whom had been controversially dropped for the 1987 Walker Cup match, had played alongside Jim Milligan and Eoghan O’Connell and all four now made the journey to Atlanta.

USA were forced into a late change with Greg Lesher replacing Allen Doyle. Doyle had suffered a ruptured disk in his back the week before the match.

GB&I entered the final afternoon Singles leading 11-5 and needing just 1.5 points to win the match for just the third time and for the first time away from home.

USA made their opponents work for it with not one of the eight GB&I players able to win their Day 2 Singles. Thankfully three were able to secure halves to get the job done.

Andrew Hare and Eoghan O’Connell were the first two to secure their halves. Hare was 2 Down with two to play to Doug Martin but a birdie – par finish was enough to secure parity for the Englishman. Ireland’s O’Connell benefited from a 3-putt from Phil Mickelson on the 17th to move back to All Square with both players then seeing out the home hole in par.

It was Jim Milligan (25) who secured the crucial final half against Jay Sigel (45) in the last game out, coming back from 2 Down with three holes to play. Milligan birdied the 16th, chipped in from 30 feet for a winning par on 17 and then halved in bogey 5 on the 18th to the relief of his teammates.

Once back in the UK, John James, a member of the R&A Selection Committee, borrowed the Walker Cup trophy to exhibit it at a building society conference in Gloucestershire, England. During the event the trophy vanished from the bar where it was sitting. The hotel manager said “One minute it was there and the next it was gone. Mr. James was understandably anxious to find it again.” Fortunately the disappearance proved to be a prank and the trophy was returned to the front desk during the night.