GB&I’s Ronan Rafferty became one of the youngest Walker Cup players ever. He was just 17 years, 7 months and 16 days old when play started in 1981.

Peter McEvoy stood himself down after Day 1. At this point he had played 10 games Won 1 (foursomes), Lost 8 and Halved 1. Unused to losing he’d probably had enough.

Roger Chapman and Philip Walton both secured three points out of a possible four for the visitors. Walton won both his foursomes in al all-Irish partnership with Ronan Rafferty. 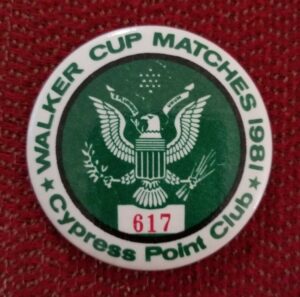 Welshman Duncan Evans played in the 1981 match at Cypress Point recording a W1 L1 H1 record. The half came in the Day 2 Singles against Corey Pavin, who of course went on to win the 1995 US Open. Evans had been 3Up at the turn in this match.

The year before Evans had won the Amateur Championship at Royal Porthcawl G.C. and was voted the BBC Wales Sports Personality of the Year.

Unfortunately his golfing exploits in the early eighties didn’t prove to be the height of Evans’ fame.

In 2003 he was jailed for thee years for his involvement in a £38m Value Added Tax (VAT) scam with ‘Riviera Ray’ Woolley. Evans got 3 years and a £2.9m bill whilst Woolley received 9 years and an order to repay £9.5m.

The pair had started a ‘carousel’ or ‘missing trader’ fraud in 1999, taking advantage of the fact that VAT is not charged on the sale of goods between VAT-registered companies based in different European countries. Woolley bought goods from other countries then claimed VAT refunds from HM Revenue & Customs that were neither liable or had ever been paid. Evans then helped him with the money laundering. Both were enjoying a life of luxury with expensive cars and multi-million pound properties.

Woolley managed to escape to Switzerland from where he sought revenge on Evans for reasons that have never been entirely clear but presumably involve large sums of money. A kidnapping was arranged and in September 2005 the now released Evans was stopped in Cheshire by what he thought to be an ‘unmarked police car’. He was taken to a garage in Liverpool and viciously attacked with hammers before being dumped in a park the following day.

In August 2009 Evans was found guilty of a £3.5m tax fraud and money laundering, this time with Leslie Cairns, and was sentenced to a further 4 years in jail. The assets were finally tracked down and in 2015 Evans was ordered by another Judge to pay £20m within 6 months or face another 10 years in jail.

Evans tried to appeal the decision on the grounds of the 5 years that had elapsed since the original trial. In June 2016 Cairns’ application was accepted by the Court of Appeal but Evans’ was refused. Prior to the final decision Evans fled the country.

In July 2017 Evans, now 58, was arrested after completing a round of golf at Quinta do Lago on the Algarve in Portugal. He was remanded in custody awaiting extradition back to the UK.

A Portuguese police office commenting on the arrest said at the time “He has been playing a lot of golf and even won a few tournaments.” It was also reported that he had somewhat foolishly been posting putting tips on YouTube.