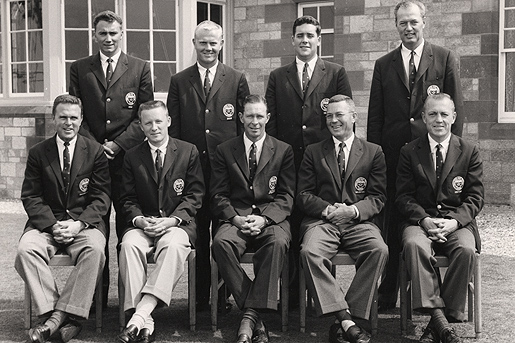 Two official 72 hole trials were held – the first at the Berkshire Trophy on April 4th and 5th and the second a special invitational at Royal Lytham & St. Annes on April 9th and 10th. The Lytham event would be restricted to 40 players with the four national unions each recommending names for consideration.

Given the above results it was no surprise to see the final GB&I 10-man team, announced on 14th April, selected completely from the initial squad. David Frame, Stuart Murray, Dickson Smith and Alan Thirlwell were the four players to miss out.

GB&I Chairman of Selectors Raymond Oppenheimer was not afraid to comment on the exclusions. “We feel Thirlwell’s putting is not as good as before and his method of putting is not calculated to stand up to the strain of the match” he said before moving on to his reserve. “Dick (Smith) is a very fine golfer, but he is 41 and where there are two players of about equal merit we pursue our stated policy of giving the chance to the younger man.”

GB&I were forced into a late team change. Reserve Dick Smith, the Scottish Amateur champion, replaced Jimmy Walker who fractured his kneecap in a car accident in late April. Alan Thirlwell – the dodgy putter – and Sandy Saddler were announced as the new first and second reserves on 31st April. Oppenheimer believed Saddler deserved some formal recognition for his performance at Lytham even though his chances of playing at this point in proceedings were slim.

Dick Smith injured his neck in practice which took him out of consideration for the Day 1 Foursomes. He lost 5&4 to Nicklaus in the Singles having replaced Perowne in the GB&I line-up. David Marsh, who was selected in the original 10-man line up, was ultimately not selected for either series by captain Micklem.

The match was played in near perfect sunny weather

A tee shot by William Hyndman (USA) at the 13th hole in the morning round of the foursomes struck a spectator and broke his nose.

Joe Carr beat Charlie Coe 2&1 in the Singles. On the 29th hole a spectator stood on  Carr’s putter shaft breaking it in to two. The Irishman saw out the contest putting successfully with his 3-iron.

The Amateur Championship was played at Royal St. George’s G.C. on May 25th-30th. Deane Beman beat his Walker Cup teammate William Hyndman 3&2 in the final. Guy Wolstenholme lost to Beman 5&4 in the semi-finals.