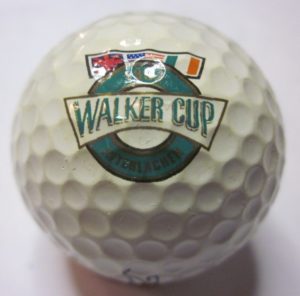 The 1993 match had originally been scheduled to be played at Chicago G.C. but in 1991 it was re-assigned to Interlachen. Chicago withdrew having come under pressure from the USGA to allow minority members which they were reluctant to do at the time. In due course Chicago changed their policies and were eventually awarded the 2005 Walker Cup.

Heavy overnight rain prior to the commencement of the match led to the first morning being washed out. A revised format was adopted at the suggestion of GB&I captain George MacGregor to ensure a total of 24 points would be contested. On Day 1 foursomes were abandoned with 10 singles being played in the afternoon. Day 2 saw the normal four foursomes played in the morning with another 10 singles in the afternoon. The 10 singles games on Day 2 was only formerly introduced in 2009.

Jay Sigel became the most capped U.S.A. player competing in his ninth consecutive match in Minnesota. He would join the U.S. Senior Tour in November 1993 leaving the Walker Cup with a playing record that will never be broken – played 33, won 18, halved 5 and lost 10.

The R&A selectors courted controversy by ignoring the selection claims of any older working amateurs focussing their attentions on the young full time amateurs. Dr. Neil Anderson, runner-up in that year’s Amateur, Garry Hay, who had won the 1993 St. Andrews Links Trophy and Gary Wolstenholme, 1991 Amateur champion, who all fitted into the latter category, all missed out. Anderson was named as the non-playing / travelling reserve as he had been in 1989.

England’s Lee Westwood has talked publically about missing out for GB&I in 1993. However, looking back his form seems to have peaked too late in the selection process. He won the Leven Gold Medal at the start of August, then the British Youths Championship at Glasgow Gailes by 8-shots on 12th-14th and lost in a play-off to Denmark’s Morton Backhausen at Dalmahoy in the International European Amateur Championship on 26th-29th.

U.S.A. easily beat GB&I 19 – 5. The 14 point margin of defeat was the largest in Walker Cup history and calls for the inclusion of players from Continental Europe were widespread thereafter.