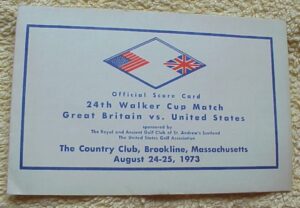 The Country Club in Brookline became the first U.S. venue to stage the Walker Cup for a second time, having first been used in 1932.

Michael Bonallack made his ninth and final appearance for GB&I although a bad back put paid to a final flourish on the course. He had participated in every Walker Cup since 1957.

Leonard Crawley writing in the match programme expressed his disappointment that Bonallack was “deposed by tradition from leading the first British side to return to the United States with the Cup to defend. The British system of electing a new captain for each match is disturbing to someone like myself who knows the game and the players. Bonallack proved himself an inspiring leader through the days of high tension before the 1971 Match and in arranging the best possible combinations for the foursomes.” Having made his point he did go on to acknowledge that “we are singularly fortunate in the appointment of Dr. David Marsh, one of the most highly respected men.”

35 year old New York stockbroker Dick Siderowf travelled to Royal Porthcawl for the Amateur to try and force his way into the USA Walker Cup team. It proved an inspired decision when he proceeded to win the Championship beating Peter Moody 5&3 in the final. He was duly selected by the USGA.

GB&I failed to win any of the eight foursomes games, losing six and halving two. Unusually the visitors did have the better of the 16 singles though, winning eight and halving two of these.

The Day 2 final foursomes involving Hugh Stuart and Willie Milne ended any hopes of a GB&I victory. On a bad morning for the rest of the team the two Scots had recovered well from 3-Down after 10 holes to lead 1Up after 15. On the 17th green victory seemed to be in sight. The USA pair were 10 feet away after three shots with the Brits on the edge of the green, 15 feet away, in two. Unfortunately Stuart ran his downhill putt 5 feet past and Milne missed the return. The USA holed and then birdied the last for an unlikely victory. An expected two point lead became three in the blink of an eye.

Danny Edwards (22) was the star man for USA winning all four of his games.

GB&I’s leading scorer was John Davies who won 2.5 points out of four fully justifying his selection which had been questioned by some a few weeks earlier.

Craig Stadler, first reserve for the USA team, went on to win the U.S. Amateur Championship at Inverness G.C. the following week.