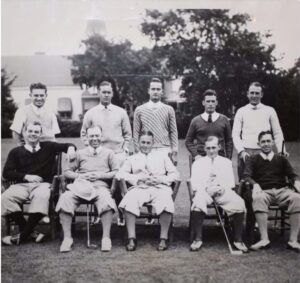 GB&I arrived in Chicago with anything but their preferred line up.

Sir Ernest Holderness, James (“Bill”) Stout and Roger Wethered were invited to play by The R&A but excused themselves during the selection process.

Cyril Tolley was then selected in mid-June for the travelling GB&I team but withdrew later in the month, apparently due to a libel action he instigated against the J.S. Fry & Sons chocolate company who had used an image of him in an advert without his permission. He was replaced by Captain Noel Martin.

Coincidentally two weeks after their Walker Cup game Jones played Perkins in the final of the U.S. Amateur at Brae Burn C.C. This time Jones won 10&9.

Discussions between the USGA and The R&A on the size of the golf ball started at this Walker Cup match. The USGA were pushing for the global adoption of an American 1.68″ diameter ball whilst The R&A preferred to retain the smaller 1.62″ diameter British ball. It was not until 1990 that the USGA finally got their way.

Large crowds were expected but after the U.S.A.’s clean sweep on Day 1 interest quickly waned. Chicago G.C. were left with a deficit of $2,500 on the event and the USGA gave up some of their gate receipts to reduce the host club’s losses.

British Pathé Highlights of the 1928 Match