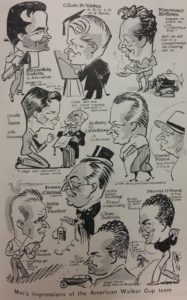 GB&I won the match for the first time in front of crowds estimated to be in the region of 12,000. Whilst it may be going too far to say the victory saved the contest it undoubtedly gave it some new momentum. The Walker Cup was a proper competition again and as such could still be considered relevant.

The USGA announced their 8-man team, with six newcomers on 8th January 1938. Elder statesman Francis Ouimet was again chosen as non-playing captain. For the record the U.S.A.’s alternates were Tommy Suffern Tailer Jr. and Donald Moe (who played in the 1930 and 1932 matches). 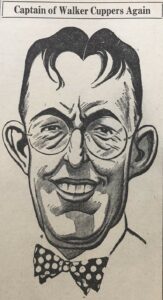 The 1937 Amateur champion was Robert Sweeny Jr. Born in Pasadena, California he was the fifth American to win the Championship. However, having come over to study at Oxford University in the early 1930s he chose not to return (until the 1950s) and made his residence in London. Whilst there was some discussion about his inclusion in the US team, particularly as it was selected early, his lack of American results went against him in the final analysis. 1938 would start a flirtation with the match for Sweeny which would continue for the next 20 years but ultimately would end in no appearances. [see 1947 and 1955 Match Notes]

In line with their previously stated approach Cecil Ewing was added by The R&A at the conclusion of the Amateur Championship at Troon having earned his place by reaching the Final where he lost to USA’s Charlie Yates.

The emergence of Ireland’s Jimmy Bruen (18) as a genuinely world class player gave everyone concerned with the GB&I Walker cup team confidence that they would be more competitive in this 10th match. Bruin was the standout player at the GB&I trials in early May and surprisingly skipped the Amateur Championship, played the week before the Walker Cup, so he could conserve energy and practice at St. Andrews.

Touring USA Walker Cup player Charlie Yates, playing on a links course for the first time, won the Amateur Championship and despite his team’s loss in the following week’s match was personally unbeaten. He notably beat Jimmy Bruen in the No. 1 singles game too. 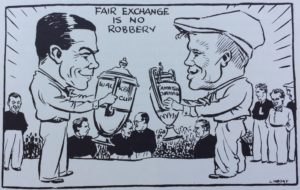 Speaking to the crowd at the presentation ceremony a gracious Francis Ouimet said “All good things must come to an end but I am speaking for my team-mates, and for Americans at home, when I say that we are sincerely pleased that Britain have won the Cup. We tried to win but we have been beaten by the best team that has ever played in the match.”

USA’s Fred Haas Jr turned pro in 1945 before the next match. He went on to become the first Walker Cup to also play in the Ryder Cup which the did in 1953.