Scenes from the 1930 @WalkerCup. On this day in 1930, Bob Jones led the US Team to a 10-2 victory over Great Britain & Ireland at Royal St. George's Golf Club in Kent. The Walker Cup preceded an unparalleled run of victories for Jones that would become the Grand Slam. pic.twitter.com/omYHDVh244

British Pathé Footage of the 1930 Match

U.S. captain Bobby Jones Jr started his 1930 Grand Slam year by first helping his team secure the Walker Cup. Indeed the USGA’s funding of the trip probably played a critical part in his historic achievement. Whilst Jones’ amateur status has been questioned in some quarters no one can deny that of his four trips to Britain, in 1921, 1926, 1927 and 1930, three of them were primarily on USA team business and funded by the USGA and it’s supporters. Only his 1927 trip to St. Andrews for The Open was self-funded.

Jones’ subsequent post Grand Slam retirement later that year was no doubt a fillip to GB&I’s amateurs who had now lost the first six Walker Cups.

Roland MacKenzie was first reserve for the U.S. team but was promoted to the trip after Jess Sweetser withdrew due to business pressures, the match coming shortly after the Wall Street crash of September 1929 and the start of The Great Depression of the 1930’s. Maurice McCarthy was the USA’s second non-travelling reserve.

The first seven members of the GB&I team were announced in mid-March. Roger Wethered (captain), Rex Hartley, Sir Ernest Holderness, Nelson Smith, J.A. “Bill” Stout, Cyril Tolley and Tony Torrance were in the group. Due to work commitments Dr. William Tweddell and John Wilson had made themselves unavailable the R&A added at the time.

Three Scotsman William Campbell, Robert Harris and J.A. Lang were then added in April. However, Harris and Lang were subsequently not used in the match.

When Wethered was asked about the surprise omission of John Beck during the match he supposedly came out with the classic response “Oh, we thought of John but no one seemed to have his address.” A nice story but unlikely to be true as Beck and Wethered were both Oxford teammates and golf blues in 1920 so would surely have been able to contact each other if required.

The 1930 match saw two main changes to the two previously played in Britain. Firstly it was not staged on the Old Course in St. Andrews and secondly it was played before, rather than after, the Amateur Championship. Perhaps The R&A hoped the USA players would be less acclimatised and that their GB&I selection would be easier, not clouded by freak results in the Championship.

The R&A charged an admission fee for the first time at Sandwich. Helped by sunny weather throughout around 8,000 spectators turned up on day 1 and 6,000 on day 2, numbers higher than had been seen previously in Kent for either The Open or Amateur Championships.  The Prince of Wales also flew down to watch all of the match.

The Day 2 singles saw one of the great comebacks in Walker Cup history. GB&I’s Bill Stout, round in 68, was 4Up after 18 holes of his game against Donald Moe. Stout started the second round 3, 3, 3 to move to 7Up, a lead he maintained through 23 holes. Moe then won 7 of the next 12 holes to be level after 35 holes. At the 36th his second shot finished 3 feet from the hole, he birdied, ‘signed’ for a 67 and won the game by 1 Hole. 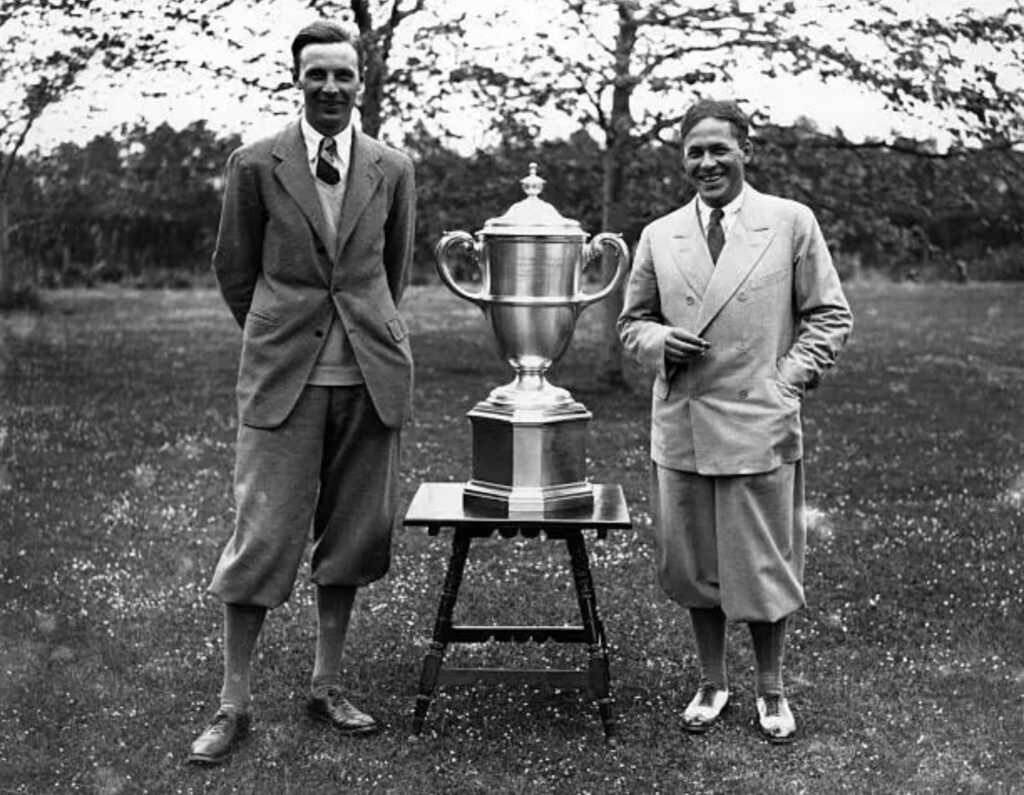 [As it might have been reported by the new Poet Laureate*, if he had happened to be there and had wanted to do it. The reader is asked to remember very clearly that the conversations recorded in the lines which follow are not so much matters of historical fact as of poetic insight and imagination.]

*John Masefield had been appointed the United Kingdom’s new Poet Laureate on 9th May 1930.

An hour before the start they talked together,
A pair of golfers in the mild May weather,
TOLLEY and his companion, WETHERED.
For England they had oftentimes been dead.

TOLLEY was large of frame and bold of rig,
Striding the Downs had made his body big.
Stalwart he was, and what he said he felt;
He gave the tiny ball a fearsome welt.

Wide tees he loved and holes with longest carry,
He let into his brassies like Old Harry;
Yet sometimes he could be the very devil
At holing chipped approach shots to keep level.

In photographs he had a bulldog pipe,
Filled with tobacco from his baccy-kipe.
He loved the mown grass better than deep clover;
He wore a very beautiful pull-over.

The captain, WETHERED, had equal grit;
He made long parks seem paddocks when he hit;
He had the lordliest kind of follow-through
And hit sweet iron-shots. Such were these two.

But now the course was by the bents and sands
And ready for firm sinews and strong hands.
The sun shone high above the German Ocean
(Or the North Sea), which moved with faint emotion.

There was a light wind from the land, not strong,
‘The course,’ said WETHERED, ‘won’t play too long.
The greens are quick. The ball that’s meant to drop
Or creep up to the hole is like to pop
Over the tin and run a good way past it.’
‘I know it is,’ said TOLLEY. ‘__ and __ it!’
‘Too early,’ WETHERED replied, ‘to swear’;
‘Wait till we find a bunker.’

The warm air
Was full of all the scents and sounds of Spring;
Both SMITH and CAMPBELL were inclined to sing
Some sweet old Scottish air like ‘Annie Laurie,’
Which they included in their repertory.

‘See,’ shouted HOLDERNESS, ‘the mounting lark
In the blue zenith up above us. Hark !’
But STOUT and HARTLEY cried, ‘The only regal
Bird in the air today must be the eagle.’

The team included also T.A. TORRANCE;
They all looked fit and hearty. None wore sporrans.

Sandwich was packed. Lord Bullmonth came from Garp
In a green limousine with Lady Yarp;
The misses Smythe were there from Tipton Green,
And Colonel Gooch, a rather poor sixteen,
And Wilson, who achieved the Moltby medal
At Wragge last week, defeating Dr. Peddle,
And young Jane Isinglass from Scawby Cole,
Who won the Ladies’ Invitation Bowl.

Golfers were there from Scotland and from Wales,
And the far West, who told each other tales,
How they had pulled or sliced into the burn,
And trumped, being two down at the turn.

A Hottentot was talking to a Jap,
Who held a twenty-seven handicap
At Tokio, and all the vivd blazers
And stockings of the girls attracted gazers

The world had come to see the Walker Cup,
They hoped and prayed that England would be up.

At the top of his form was BOBBY JONES,
Golf was his blood and golf his bones,
All the American courses there are
He had holed at some time under par;
From Oklahoma to Ohio
He had laid the golfing records low,
And was thought by many to be a snip
This year for the Amateur Championship.

He was a hard one to overwhelm,
And so were WILLING and G. VON ELM,
And VOIGHT and MOE and R. MACKENZIE
Had driven opponents into frenzy.
Men looked at JOHNSTON, men looked at OUIMET,
‘Golly!’ they said, ‘a darn good team, eh ?’
They said, ‘It will be a difficult thing
To beat these lads with their lovely swing,

Their lovely swing and their wonderful rhythm
And all the clubs they have brought here with ’em,
Their lovely swing and their beautiful stance
And the way they snatch at the lightest chance,
And the line they take with their ten-yard putts;’
They said, ‘These beggars are full of guts;
They hit the ball with the kind of wallop
That a barman deals to a drunken trollop.’

These were the things that men were saying.
Meanwhile the players started playing.
They played two days with a verve and vim
Not to be matched by seraphim.

The crowd was pale. It was dull, elated,
Its heart stood still, its breath was bated.
It ran from the tee to where it reckoned
Was the likeliest place to watch the second;
It stood like cormorants round the green,
The wind came over the sand-hills clean,
The Press photographers moved their shutters
To the sheen of aluminium putters.

A far sail hung in the cloudless offing,
‘Gee!’ said a guy, ‘this is sure some golfing!’
It was drive to drive, it was pitch to run-up.
A woman feinted when VOIGHT was one up.

Song cannot sing how steel and wood.
Socked indiarubber. Nobody could.
I should dearly like to relate the score
That each man took, whether three or four,
WETHERED working in vain while JONES
Sank his putts as a pond sinks stones,
Hole after hole and round by round –
But man by his destiny is bound;
Fate rings hims close, and his might is finished,
I am forced to get my narrative finished
In time to send it along to the paper.
Night fell, and the sea was thick with vapour.
But under the stars came up.

Edmund George Valpy Knox (10/05/81 – 02/01/71) was a poet and satirist who wrote under the pseudonym Evoe. He was editor of Punch between 1932-1949, having previously been a regular contributor of topical satirical poems for the magazine for many years.