The U.S.G.A.’s International Team Selection Committee announced the remaining members of their 2019 Walker Cup team shortly after the conclusion of play at the U.S. Amateur Championship on Sunday 18th August 2019.

The following players were added to the U.S.A roster for the match at Royal Liverpool G.C. on 7-8 September 2019: –

who were all selected on Wednesday 24th July 2019 based on their World Amateur Golf Rankings (WAGR). They were the three highest ranked U.S.A. players on that date.

Chandler PHILLIPS (22) and Ricky CASTILLO (18) are the first and second alternates respectively. 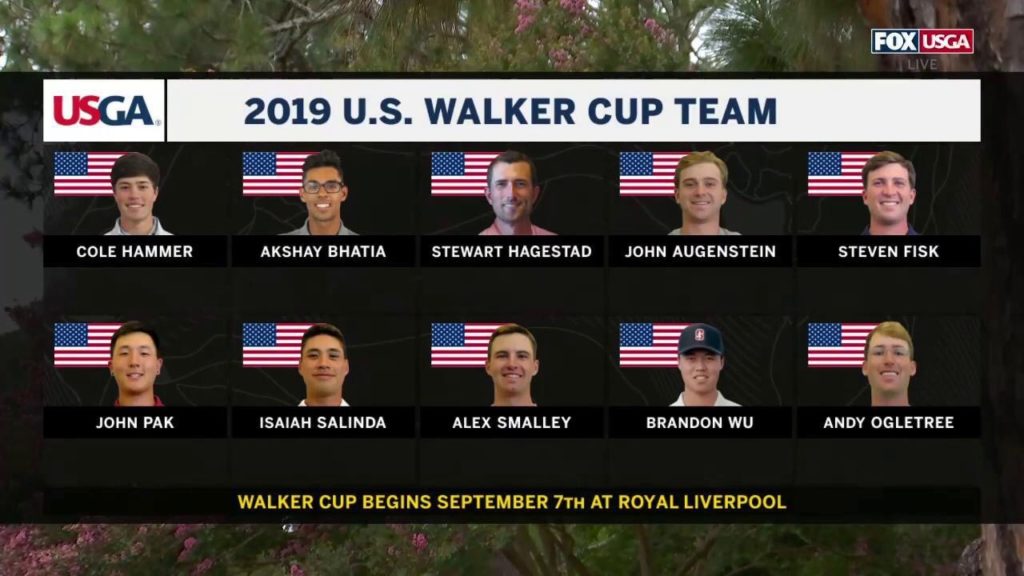 The U.S. gathering is scheduled to take place between December 14th– 18th  at Seminole G.C. in Florida.

16 players will be in attendance (current SPWAR / WAGR): –

* Davis RILEY – Hattiesburg, Mississippi (10 / 8) withdrew on 25th November having decided to forego his final semester of eligibility at Alabama University and turn professional. He was replaced by Trent PHILLIPS.

Stewart Hagestad is the only member of the 2017 USA Team who will attend the practice session and one of three mid-amateurs invited; the others being Matt Parziale and Kevin O’Connell.

The absence of Collin Morkikawa (2 / 2), Braden Thornberry (3 / 3) and Justin Suh (4 / 1) suggests all three have made their intentions to turn Pro at the end of the current U.S. College season known to the USGA.

John Bodenhamer, USGA senior managing director of Championships said: “This practice session presents an excellent opportunity for the players, the captain (Nathaniel Crosby) and the USGA to become familiar with each other as we begin the process of team selection. While these 16 talented individuals represent the first pool of potential team members, we expect many others will be considered as the selection process moves toward its conclusion next August.”

– the top 3 USA players in the WAGR (as of early August).

The remaining five to seven U.S. players will be decided by the USGA’s International Team Selection Committee after the U.S. Amateur concludes.

The R&A, who chose not to make a formal announcement, have also recently invited a group of players to a practice session to be held at the 2019 venue Royal Liverpool G.C. on 18-19 December 2018 *.

Unfortunately the dates clash with the South Beach International Amateur which a number of Great British and Irish players have already committed to. Amongst those planning to be in South Florida and high in the rankings are Jake BURNAGE (ENG), Conor GOUGH (ENG), David LANGLEY (ENG), Ben JONES (ENG), Joe PAGDIN (ENG), Tom PLUMB (ENG) and Robin WILLIAMS (ENG). I assume all of them will be sending their apologies.

*Subsequently photos were released by The R&A reporting that 10 players attended the two day session. These were: –

📸 2019 USA and GB&I #WalkerCup hopefuls took part in pre-selection practice sessions this past week. Check it out: https://t.co/br2RlrS34r pic.twitter.com/jaItLUpi90

The 47th Match will be played at Royal Liverpool Golf Club in Hoylake, England on September 7th– 8th 2019.