The St. Andrews Trophy has been played biennially between GB&I and Europe since 1956.

I anticipate this year’s match being a very close encounter.

With the European Men’s Amateur Team Championship coming to a conclusion at Golf de Chantilly in France on Saturday I expect the GB&I Team to be named by The R&A and Captain Craig Watson early next week.

These are the questions I’ve asked myself before selecting my Team: –

How many players do I need, where are we playing and what’s the format ?

The match is to be contested by a team of 9 GB&I players.

It is to be played on the links of Prince’s Golf Club in Kent, England on Wednesday 20th and Thursday 21st July.

On Day 1 4 foursomes and 8 singles will be played. On Day 2 there are again 4 foursomes but in a change to the recent format all 9 players will then compete in singles this year. I know from past experience that there is always a tendency to prefer pairs from the same country so need to consider that.

Who’s in the frame ?

There were 7 players from Scotland, 5 from England, 4 from Ireland and 2 from Wales in the initial squad.

We can of course remove Jack McDonald from the above group as he turned pro on 31st March.

Who has performed well this year ?

Here is my 29th June 2016 Rankings Assessment which clearly shows who our leading players have been in the year to date, at least according to the two main Amateur Rankings. 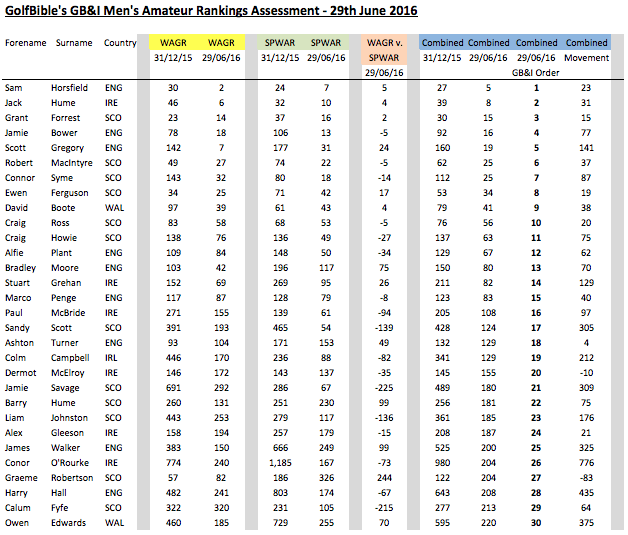 It seems unlikely to me that anyone outside my Combined Top 20 listed above will be selected. Unless of course The R&A go for a completely Scottish team – which given current form is not as outlandish a statement as it may at first seem. 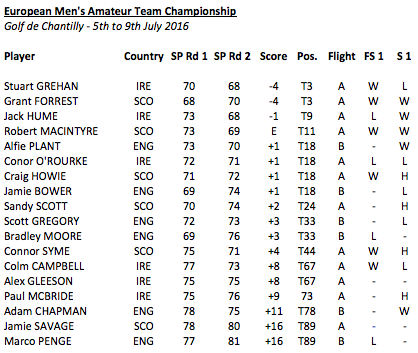 The above table clearly shows who performed well in the stroke play qualifying and how today’s first round match play has gone for our leading players.

In Division 2 David BOOTE was the medalist in the stroke play qualifying with a -9 36-hole total in Luxembourg.

At the end of June our highest ranked player was Sam HORSFIELD (ENG). I understand that Craig Watson watched and met with him at the Arnold Palmer Cup a few weeks ago at Formby but I don’t envisage him being considered or dare I say making himself available for this event. I am sure Sam will be committed to the series of major amateur events that are played in the United States during July and August.

Ewen FERGUSON (SCO) has been struggling with a wrist injury in recent weeks, withdrawing from three events in succession. I have therefore chosen to exclude him from my thoughts on fitness grounds. This is a shame for Ewen as he has started to show some good form lately with a 3rd place in the St Andrews Links Trophy and a good run at The Amateur.

So excluding Sam and Ewen here’s my team of 9, in order of selection: –

1. Grant FORREST (SCO) – since winning the Battle Trophy in Scotland he has strung to together a series of top quality results. Playing well in France and now back to his very best.

2. Jack HUME (IRE) – the South African SP and European Nations Individual 2016 champion was solid in the 2015 Walker Cup and outstanding in the Bonallack Trophy earlier this year.

3. Connor SYME (SCO) – the 2016 Australian Amateur champion has enjoyed an excellent season and is now undoubtedly one of GB&I’s top amateur players.

4. Robert MACINTYRE (SCO) – has peaked perfectly for this selection. Finalist in The Amateur and has taken that form into his last two events on the Challenge Tour and this week in France.

6. Alfie PLANT (ENG) – a fantastic winner of the Lytham Trophy who has enjoyed good finishes at the French International Amateur (T11) and Brabazon Trophy (T7) since. A Kent-lad too which should help with local support.

7. Jamie BOWER (ENG) – he’s won three events this year including the prestigious Brabazon Trophy in Kent, albeit on an inland course. Jamie also got to the last 16 of the Amateur so has certainly backed up his early season wins in South Africa.

It starts to get a bit trickier from here on in, particularly around foursomes pairings, but I’ve given the benefit of the doubt to: –

8. Stuart GREHAN (IRE) – a strong performance this week for Ireland on the back of a positive contribution at the Arnold Palmer Cup. Stuart seems to be on an upward curve to me.

9. David BOOTE (WAL) – David has enjoyed a good season for Stanford in the US and delivered winning results at the Bonallack Trophy (where he played with Jack Hume) and Arnold Palmer Cup this year. He has also made a good start in Luxembourg this week for Wales at the Division 2 European Men’s Team Championship.

Having put my head above the parapet I have to say it would be hard for me to argue if any of Craig HOWIE (SCO – partnering Connor Syme at the Euros this week), Conor O’ROURKE (Naas GC, IRE – as is Jack Hume), Sandy SCOTT (SCO), Craig ROSS (SCO) or Bradley MOORE (ENG – a possible partner for Alfie Plant) were selected by The R&A based on 2016 performances and potential foursome pairings.

Let me know what you think by commenting below or on Twitter ?