The U.S.G.A. today announced that 56 year old Nathaniel CROSBY had been selected to captain the U.S.A. team at the 2019 Walker Cup match.

Stuart Francis, U.S.G.A. Championship Committee chairman, said “Nathaniel Crosby has proven experience as an amateur player at the highest levels in both individual and team competition, and this will lend itself well to providing leadership for the USA Walker Cup team in 2019”. He has the key attributes of “sportsmanship, patriotism and a competitive spirit, that will assist him as captain.”

Crosby played in the 1983 Walker Cup match at Royal Liverpool GC. His appointment therefore has a nice symmetry with the 2019 contest also being staged at the historic links in Hoylake, England.

Nowadays he plays much of his golf at Seminole G.C. where the Walker Cup is being staged in 2021. Whilst there are other candidates with links to this exclusive Florida Club it does seem likely that his appointment will be for the now standard two match term.

In the USGA announcement Crosby said: “I am thrilled and overwhelmed to be chosen captain. It will again be a privilege to be a part of the Walker Cup competition. Many of my closest friends are former captains who will hopefully take the time to share their approaches in an effort to help me with my new responsibilities.” 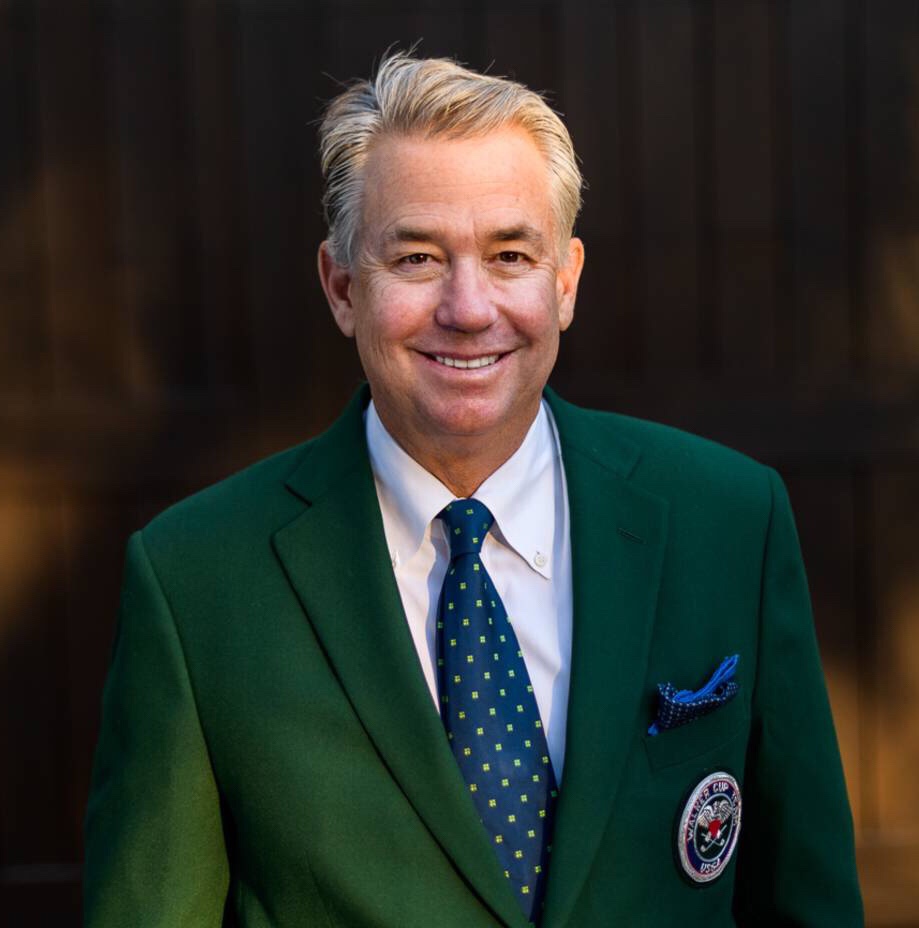 Nathaniel (‘Nate’) Crosby was introduced to golf by his famous father, Bing. Bing was often described as a golfer that liked to sing given his obsession with the game.

He started playing golf when he was 4, taking lessons from Maurice Ver Brugge at the family’s home club, Burlinghame C.C., near San Francisco, and went on to become a very accomplished golfer.

His biggest achievement was his victory, aged 19, in the 1981 US Amateur Championship at Olympic Club in San Francisco. Playing number 3 for the University of Miami during the year and having showed little form beforehand his win was something of a surprise. He did however have the benefit of sleeping in his own bed at his parent’s house during the event. Huge crowds, drawn by the Crosby name, saw Nathaniel beat Brian Lindley on the 37th hole of the final. He staged a great comeback having been both 4 Down with 10 holes to play and 2 Down with 3 to play.

Sadly his father was unable to witness his achievement. Bing had died four years earlier on 14th October 1977, collapsing from a heart attack after playing 18 holes at La Moraleja G.C. near Madrid. His last words being “That was a great game of golf, fellas.” However, Nathaniel later revealed he wore Bing’s 1941 US Amateur competitor badge around his neck all week rubbing it occasionally when seeking inspiration or calmness. “It was a something to relax me. It was a way of keeping positive thoughts in my mind. I knew he was up there and he was on my side.”

The USA won the 1983 Walker Cup match 13.5 – 10.5 at Royal Liverpool. Captained by Jay Sigel (who also played himself), Crosby lost his Day 1 Singles 6&4 to Phil Parkin before he and William Hoffer beat George Macgregor and Philip Walton by 2 holes in their Day 2 Foursomes game. He sat out both the Day 1 Foursomes and Day 2 Singles.

Crosby graduated from the University of Miami in 1984 with a degree in politics and public administration. He then turned professional, playing briefly in the U.S. before trying his hand on the European Tour. With little success he ‘retired’ after three years, moving into the business world in 1988.

He regained his amateur status in 1994. This was initially so that he could play in the AT&T Pebble Beach National Pro-Am, a tournament that had grown out of his father’s Bing Crosby National Pro-Amateur (also known as the Crosby Clambake). After Bing’s death in 1977, the tournament was hosted by the Crosby family for eight years, before the association was finally ended in 1985. Nathaniel had also planned to compete in Senior amateur events but this doesn’t appear to have come to anything in recent years.

He is the seventh child of Bing Crosby and the youngest of his three children with his second wife, the entertainer Kathryn Grant. Grant was 31 years Bing’s junior when they married.

His four half brothers are now all dead. He has an elder brother Harry and a sister Mary. Mary famously played Kristin Shepard, the mistress responsible for shooting J.R. Ewing in the hit television series ‘Dallas’. Nathaniel also performed on stage and screen many times with various family members when he was a child.

When his playing career came to an end he moved into the golf equipment business working firstly for Toney Penna (a touring pro. who had been Nathaniel’s teacher), then The Nicklaus Equipment Company and finally Orlimar Golf. He is currently chairman of AppleTree Golf Society, a membership programme that is tied to around 30 premier golf clubs in vacation and second-home destinations.

In 2016 he released a book, written with the assistance of golf journalist John Strege, entitled ’18 Holes With Bing: Golf, Life and Lessons From Dad’, where he talked about his relationship with his father through their shared love of golf.