The European Men’s Amateur Team Championship concluded yesterday at the Diamond CC in Austria. Spain were victorious beating England 4-3 in the Final.

So what does this mean from a Walker Cup perspective ?

Here’s my assessment of the individual performances of the 24 Great Britain & Ireland (GB&I) players who were competing. I have tried to take into account stroke play qualifying scores, match play results, singles or foursomes games played and the quality of the opposition faced. 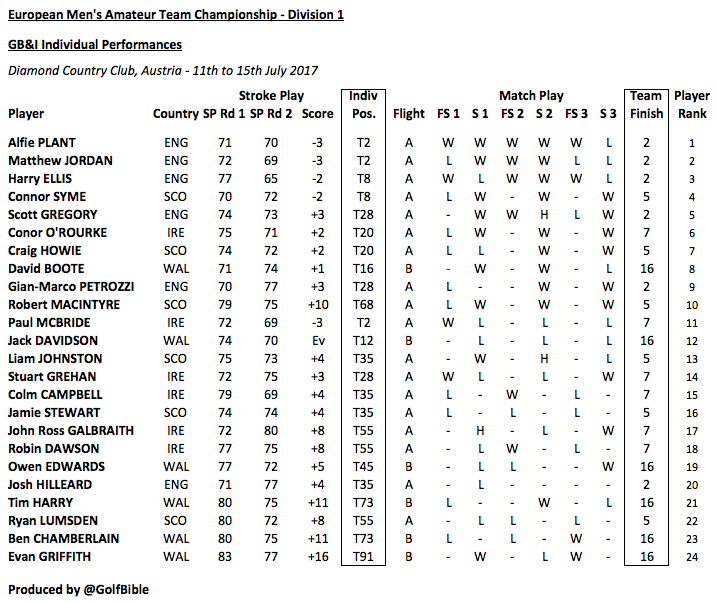 There are now just 36 days until the GB&I team is announced, assuming this will take place on 21st August, the day after the US Amateur finishes.

In conclusion events in Austria largely confirmed my initial thoughts on our team selection with most of the players previously listed doing well.

Unfortunately those on the periphery, save for Scott GREGORY, largely failed to take advantage of the opportunity this Championship gave them to state their cases more forcibly. England’s Gian-Marco PETROZZI also showed that his Walker Cup race may not yet be run with two singles wins.

Jack SINGH BRAR chose to make himself unavailable for England last week, preferring to travel to New York to try and qualify for the US Amateur. A potentially high risk strategy but one that in the end paid off. He won the qualifier at Paramount CC by 4 shots with two rounds of 66. Results

So if I had to pick the GB&I Walker Cup team today this is who I would go for (in order): –

I think the first eight, probably nine, in the above list are increasingly secure based on 2017 results and current form. With there being four each from both England and Scotland one would hope foursomes pairings could be found fairly easily amongst them too.

David BOOTE continues to be a consistent performer with a number of solid results this season. When you add in his four years experience of playing in the US at Stanford – let’s not forget the 2017 match is an AWAY one – you have to say his exclusion from our 2017 team would be a big surprise. With Jack DAVIDSON having lost a bit of form in recent weeks the potential all Welsh foursomes partnership appears to be drifting away from his case though. Nevertheless I am sure there will be a list of team mates delighted to have him as their partner in Los Angeles.

Paul MCBRIDE qualified well in Austria (-3 / Tied 2nd) but will have been disappointed to lose all three of his singles games, albeit these were all tight affairs – two were by 1 hole and the other on the 19th. McBride has played very well since returning home from the US and what gives him the edge for me at the moment is his three years of US College experience. McBride will be a Senior at Wake Forest next Autumn. Interestingly one of his teammates, Will Zalatoris, has a good chances of making the US team too. It was also interesting to read this morning that McBride has been granted a place in the European Tour’s Porsche European Open in Hamburg in two week’s time. If he can make the cut there then that would certainly be a huge boost to his chances.

Whilst by no means the primary concern, which is of course selecting the best team to win, BOOTE and McBRIDE also enable a full house to be delivered, i.e. a representative from all four of the GB&I nations to be included. This hasn’t happened that often in recent years but would no doubt be beneficial for the profile of the match on our side of the Atlantic.

After this week it is probably Scott GREGORY now, rather than Jack DAVIDSON, Robin DAWSON or John Ross GALBRAITH, who is pushing hardest for inclusion. Whilst he was only the tied 10th best GB&I stroke play qualifier Scott once again showed what a tough match player he is in the later stages.

So what events are left that can move the GB&I Walker Cup dial over the next four weeks ?

First up are the closed English, Scottish and Welsh Amateur Championships which are all being played at the start of August. The Irish Amateur continues to be played in late August, starting this year on 22nd. In a Walker Cup year this is a huge scheduling error and one that could prove costly in a tight selection race, particularly as things stand for Paul MCBRIDE. *

*The South of Ireland Championship starts on 26th July and whilst not as prestigious as the Irish Amateur in fact may be more important this year.

The US Amateur (14-20 August) is of course the big one but I anticipate that will have a relatively limited GB&I field with no more than 8 of our players competing.

The Men’s Home Internationals (16-18 August) will also be an important event but as it is scheduled against the US Amateur some of it’s value to the selectors will inevitably be lost.