Below are my observations on both of these important matters with regard to the Walker Cup and my latest views on how the Walker Cup squad is shaping up.

Matthias SCHMID (GER) won the European Amateur Championship at Diamond C.C. in Austria today. Rounds of 67, 73, a best of the week 63 and 70 took him to a 273 (-15) total and a comfortable 3 shot victory. The win brings with it an exemption into the 148th Open Championship at Royal Portrush G.C. 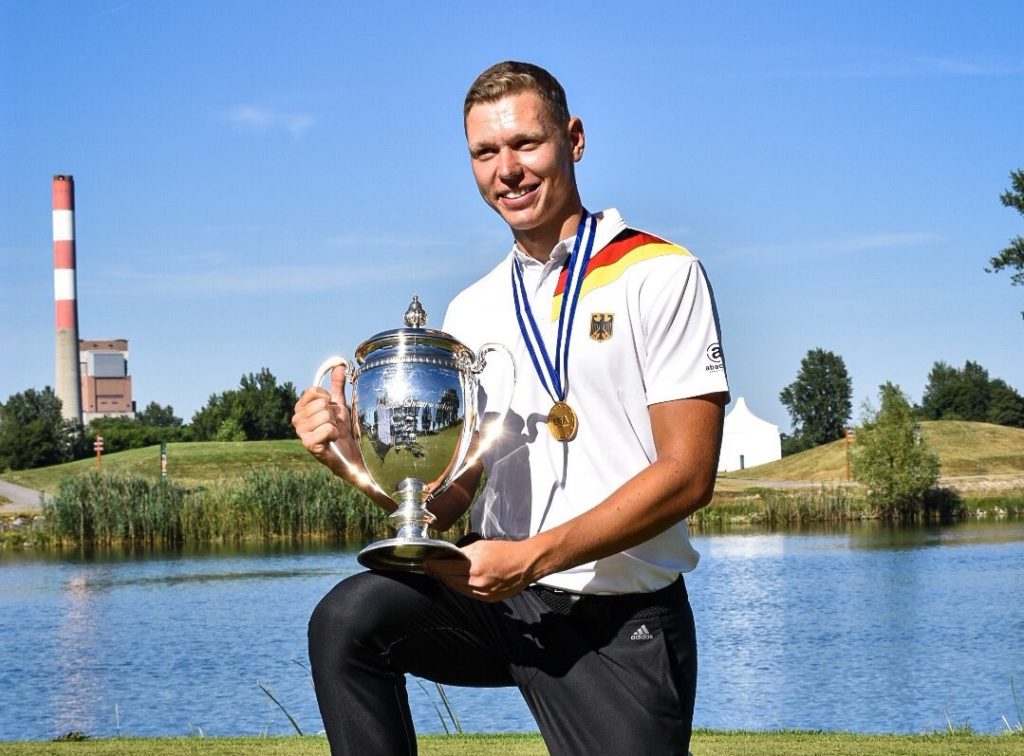 Euan WALKER (SCO), bouncing back from his disappointment at The Amateur and confirming his status as Great Britain & Ireland’s (GB&I) No. 1 player, finished 2nd on -12. A final round 66 (-6) being the highlight of his week’s work.

Ben JONES (ENG) 68 and Joe LONG (ENG) 74 finished the Championship on -9 tied for 3rd place. Jones has come through strongly in recent weeks.

It was also another good week for Caolan RAFFERTY (IRE) 69 who finished tied 6th on -8. Caolan seems to have played well all year.

Lytham Trophy winner Josh MCMAHON (ENG) -5 finished tied 13th which may be just what was required to help push him in to the next GB&I Walker Cup squad.

Harry HALL (ENG) will be disappointed with his tied 16th finish on -4. After a superb front nine of 31 (-5) today he looked like pushing Schmid all the way home but sadly a returning 43 (+7) destroyed much of his excellent work over the preceding three and half days. Hall has played very well since returning from Las Vegas in May.

The ever consistent David LANGLEY (ENG) was seventh and the last GB&I player to finish in the top 20 in Austria.

Here are the final results. 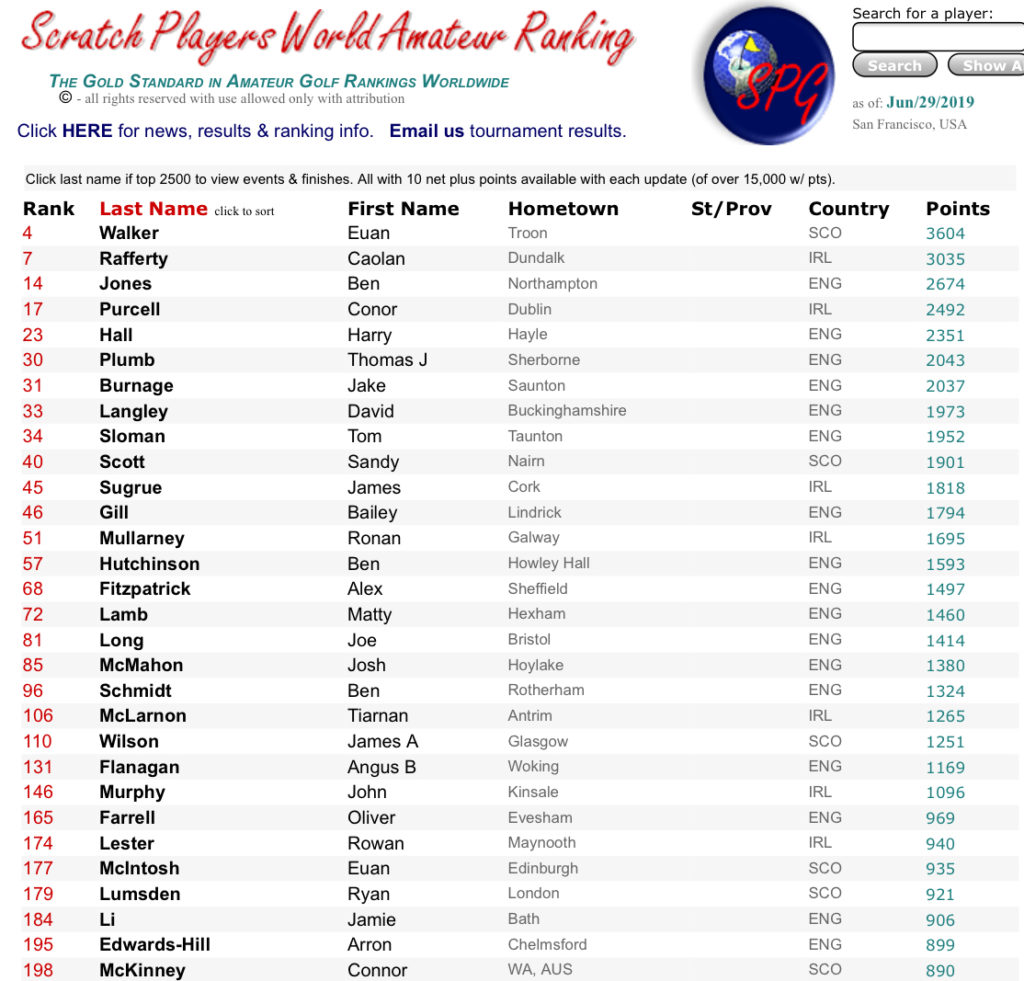 Prior to the European Amateur Championship starting on Wednesday the home nations all had to confirm their teams for the 2019 European Men’s Amateur Team Championship.

This event will be played at Ljunghusen G.C. in Sweden on Tuesday 9 – Saturday 13 July.

Ljunghusen is a heathland links course located on the Falsterbo Peninsula, south of Malmö.

16 teams, each consisting of 6 players, will be participating. 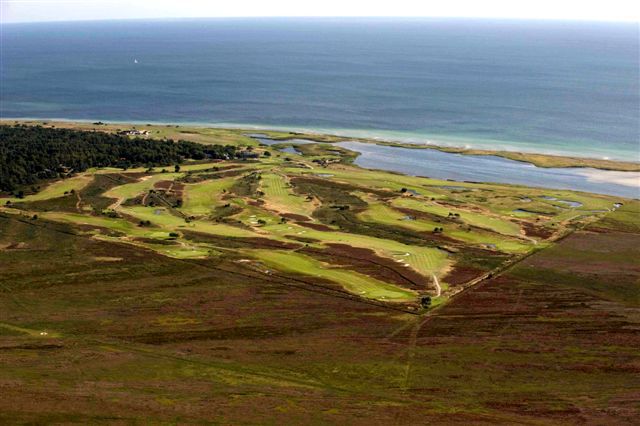 In a Walker Cup year the home nation teams for this event are an important indicator as to where selectors mind’s are.

At the end of the day if you can’t make you own country’s 6-man team 6 weeks before the Walker Cup team selection then the message is fairly clear – you still have work to do to have a chance of playing for GB&I.

Team inclusion also provides the players with a unique opportunity to play foursomes and singles match play golf against the best players in Europe and potentially against their direct cometition for Walker Cup places.

Here are the home nation teams all of which had to be submitted by Wednesday 26th June and were therefore selected before the start of the European Amateur which finished today in Austria: –

At the time of selection England had 11 players in the top 100 of the SPWAR so picking a team was never going to be easy.

Jake Burnage (#29), winner of the St. Andrews Links Trophy, David Langley (#39), Bailey Gill (#45), a member of the winning England team at the European Nations in April, Ben Hutchinson (#55), Ben Schmidt (#92), winner of the Brabazon Trophy and selected for the Boys’ event which is played concurrently, Angus Flanagan (#127) and Josh McMahon (#133), winner of the Lytham Trophy could all make a case for being unlucky here based on either recent wins or form.

Looking at the SPWAR, and I accept rankings are not everything, Matty Lamb and Alex Fitzpatrick appear to be the two debatable names in the England team. To be fair to Lamb he has enjoyed a good June, just missing out on the St. Andrews Links title and progressing to the Last 16 of The Amateur. Unfortunately at this moment in time a selection on form can’t really be used to support Fitzpatrick, a player of great promise but one whose results haven’t really matched this recently. After a good finish to his U.S. college season with Wake Forest he chose not to play in the Brabazon Trophy (accepting the very tight scheduling), missed the cut at St. Andrews and then The Amateur and then withdrew (for reasons admittedly I don’t know) from the European Amateur.

John Murphy (#140) and Rowan Lester (#166) are ranked higher than Mark Power, who has been in exam mode for the last month, but neither have done enough to make a persuasive case since returning from their U.S. colleges in May. Tom McKibbin (#211) may have been a consideration but like Schmidt for England he has been selected for the Boys Team Championship.

Connor Mckinney (#191) is also highly ranked and I assume is being sent to the Boys’ event for which I think he still qualifies.

The GB&I selectors will be finalising their reduced Walker Cup squad after the European Men’s Amateur Team Championship for a training gathering to be held at Royal Liverpool G.C. on 23-24 July.

Here is my slightly revised assessment of how the original 26, and other players who have emerged over the last two months, currently fare with regard to this next selection. I now have the European Amateur Championship results and European Team Championship selections to hand which are obviously helpful.

I have listed all of the players in order of how I see their current form / Squad selection: –

England Golf’s decision to leave Jake Burnage out of their team is obviously not a vote of confidence from Mr. Edwards – who certainly knows what he is doing and is perhaps rightly focussing on match play records – but for me his win at St. Andrews and links pedigree keep him in my team. Conor Purcell‘s form is also a bit of a concern and he ideally needs to regain it quickly if my early confidence in his selection is to be borne out.

A few players below are pushing hard for consideration.

I have pushed the experienced David Langley for some time now impressed by his consistent displays almost every week. Josh McMahon was unlucky not to be included in my July Squad earlier this week given his outstanding Lytham Trophy win. Today’s top 15 result at the European Amateur provides additional weight to his inclusion so I have added him.

My July squad is going to be England heavy but I believe this reflects recent results and form. The time for token selection gestures is over and we are now down to the serious business of finalising a team.

The final group of players, for a variety of reasons, simply haven’t done enough to stay in my Walker Cup squad assuming it is reduced to manageable numbers, which I have chosen to be 18.

The good or bad news for everyone, depending on where they sit, is I am not a selector and am simply expressing my own personal views.