The wining score of 19 points matched the most ever in Walker Cup history. USA had previously reached that total in 1993 when they won 19 – 5 at a rain affected Interlachen Country Club in Minnesota.

Here is the Individual Player Contributions chart from the match: – 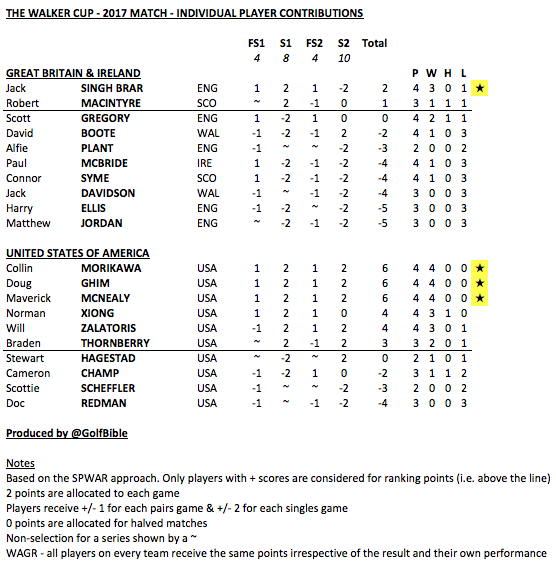 Doug GHIM, Maverick MCNEALY and Collin MORIKAWA each went 4 – 0, the first time three players had accomplished this for one team in the same Walker Cup match. The previous record being two perfect 4 game records – USA in 1977 (John Fought and Lindy Miller), 1997 (John Harris and Brad Elder) and 2009 (Peter Uihlein and Rickie Fowler) and GB&I in 1999 (Luke Donald and Paul Casey).

Doug GHIM had also gone 4 – 0 in the Arnold Palmer Cup match earlier this summer. A memorable and unique double for him. 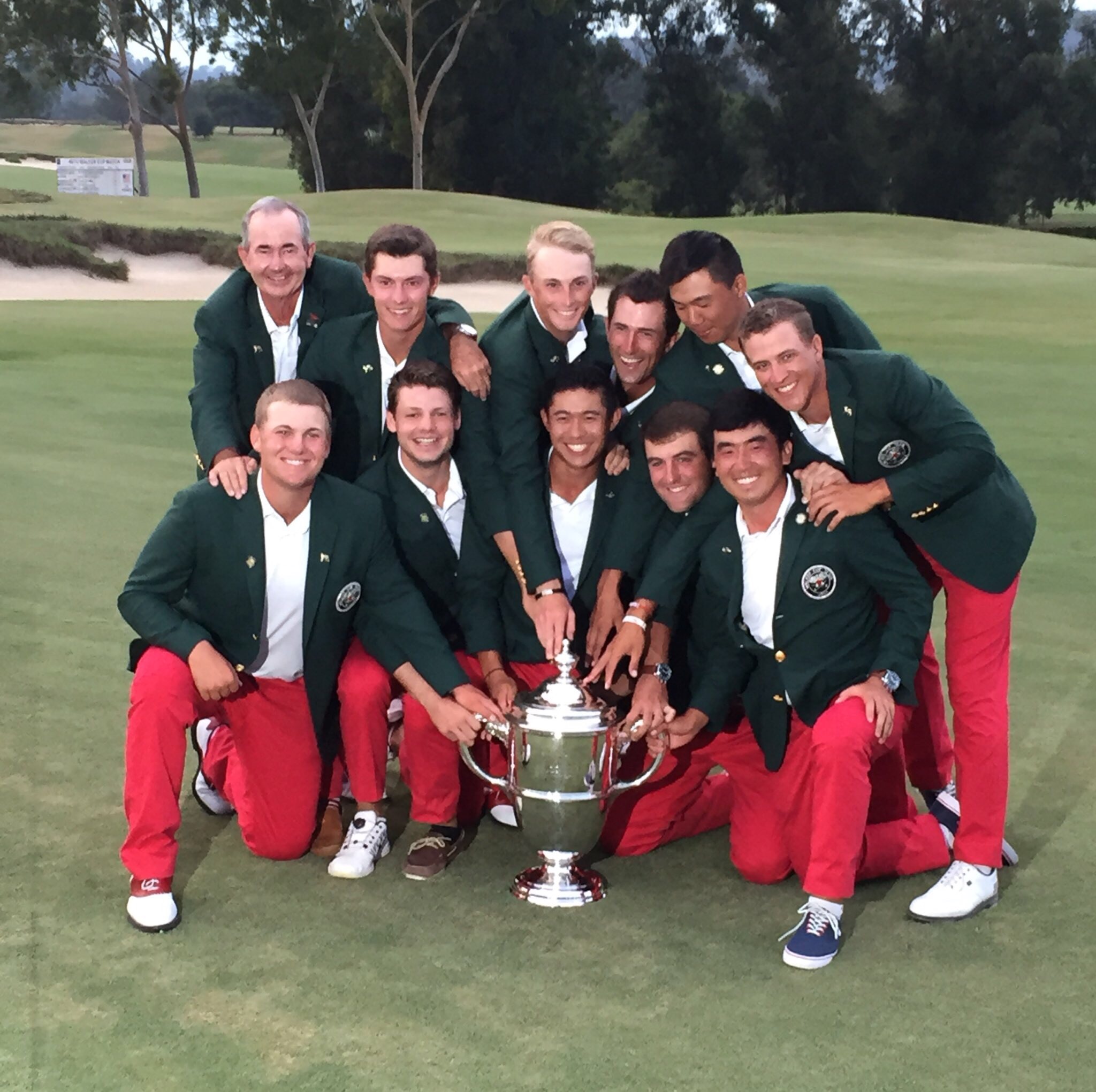 GB&I’s very slim hopes of staging a comeback on Day 2 depended on a strong morning Foursomes performance. Unfortunately they lost the series 3 – 1 to fall even further behind 11 – 5.

Scott GREGORY and Jack SINGH BRAR were GB&I’s only Foursomes winners. Gregory in particular played some great shots down the stretch, memorably holeing out from a bunker on 14 and delivering a long iron into the heart of the 18th green to close out the game 2Up.

Despite this Captain “Spider” MILLER took nothing for granted and later said he had challenged each player before the final series of matches started, telling them, “You have to win your match. Each one of you must win your match. We must win all ten matches. I was as direct as I can be. We had a good lead but there was going to be no letting up. I expected each one of them to win.”

Braden THORNBERRY certainly responded well to the instruction, the 2017 NCAA Division I Individual champion, thumping Paul MCBRIDE, 6 and 5 in game number 5 to get the ball rolling for USA.

Shortly afterwards Stewart HAGESTAD, avenging his Saturday defeat to Singh Brar, won 2 and 1 on the 17th green before Norman XIONG, at 18 the youngest player on either team, secured the final 0.5 point required to reach the all important 13.5 mark.

The Americans ended up winning seven of the 10 singles matches on Sunday afternoon. 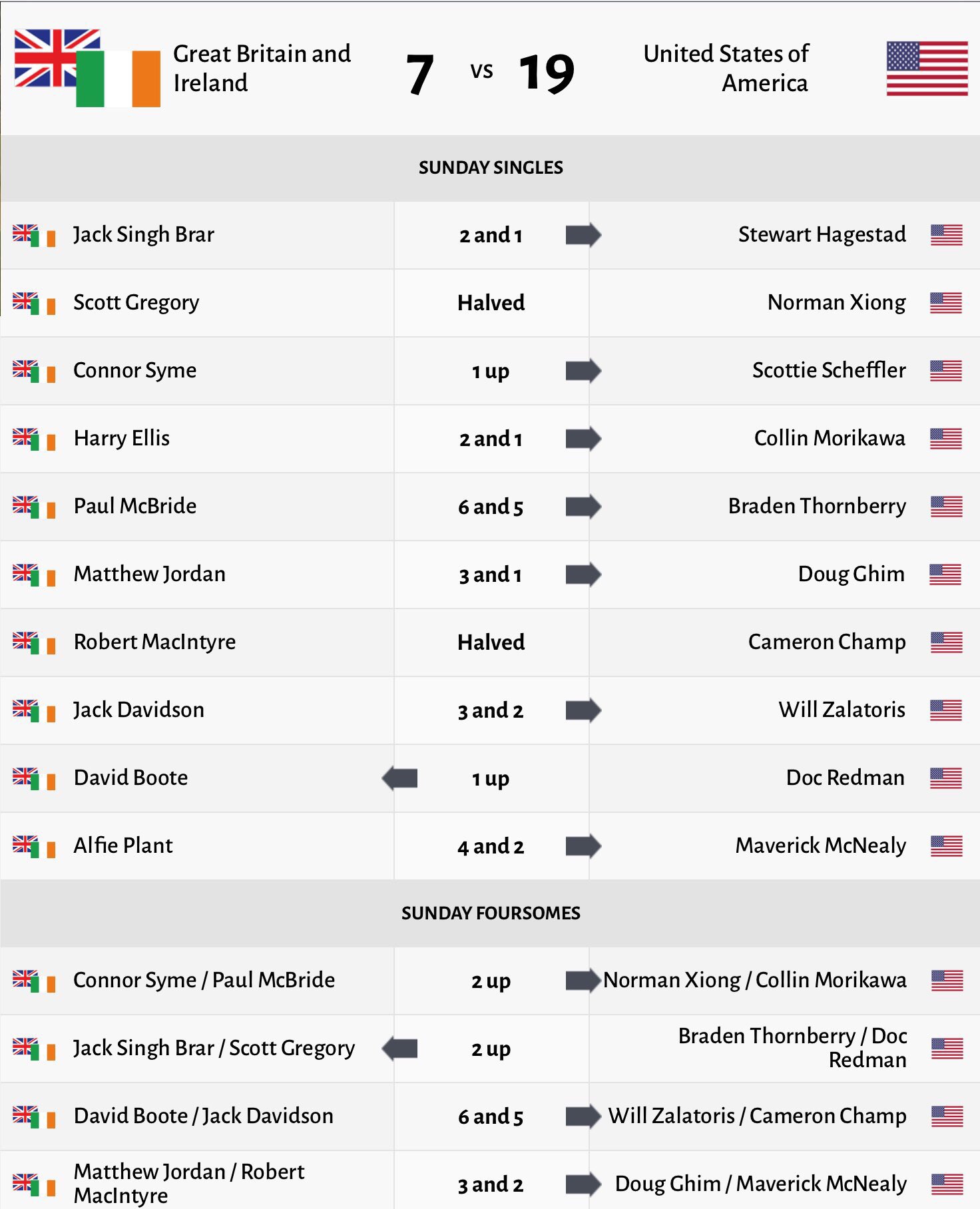 Scott GREGORY and Robert MACINTYRE provided some resistance for GB&I, halving their games. Gregory refused to accept defeat fighting back from 2 down against Norman XIONG with two to play to earn his half, sinking 30 foot and 8 foot par putts on the final two holes to do so. Similarly MacIntyre again demonstrated his match play credentials with an unbeaten Singles performance for GB&I. He beat long-hitting Cameron CHAMP easily yesterday before halving with him today.

The star man for GB&I on Sunday was David BOOTE who battled superbly to win his match against the reigning US Amateur champion Doc REDMAN. Surprisingly Redman ended up being the only US player not to contribute a point from the three games he participated in. Boote birdied the short 15th to go 2Up but the match was far from over given the three c.500 yard par 4 finishing holes still to be played. On 16 David got up and down from just short of the green before watching Redman trump him with a tap-in birdie. On 17, having called a penalty on himself for standing on his ball in the rough, he managed to get up and down from about 150 yards to secure an unlikely half in bogey. Finally on 18 Redman saw his accurate long iron approach run past the flag to the back of the green leaving himself a near impossible downhill putt. When he three putted for 5 the Welshman simply took two from 5 feet to secure a memorable win. 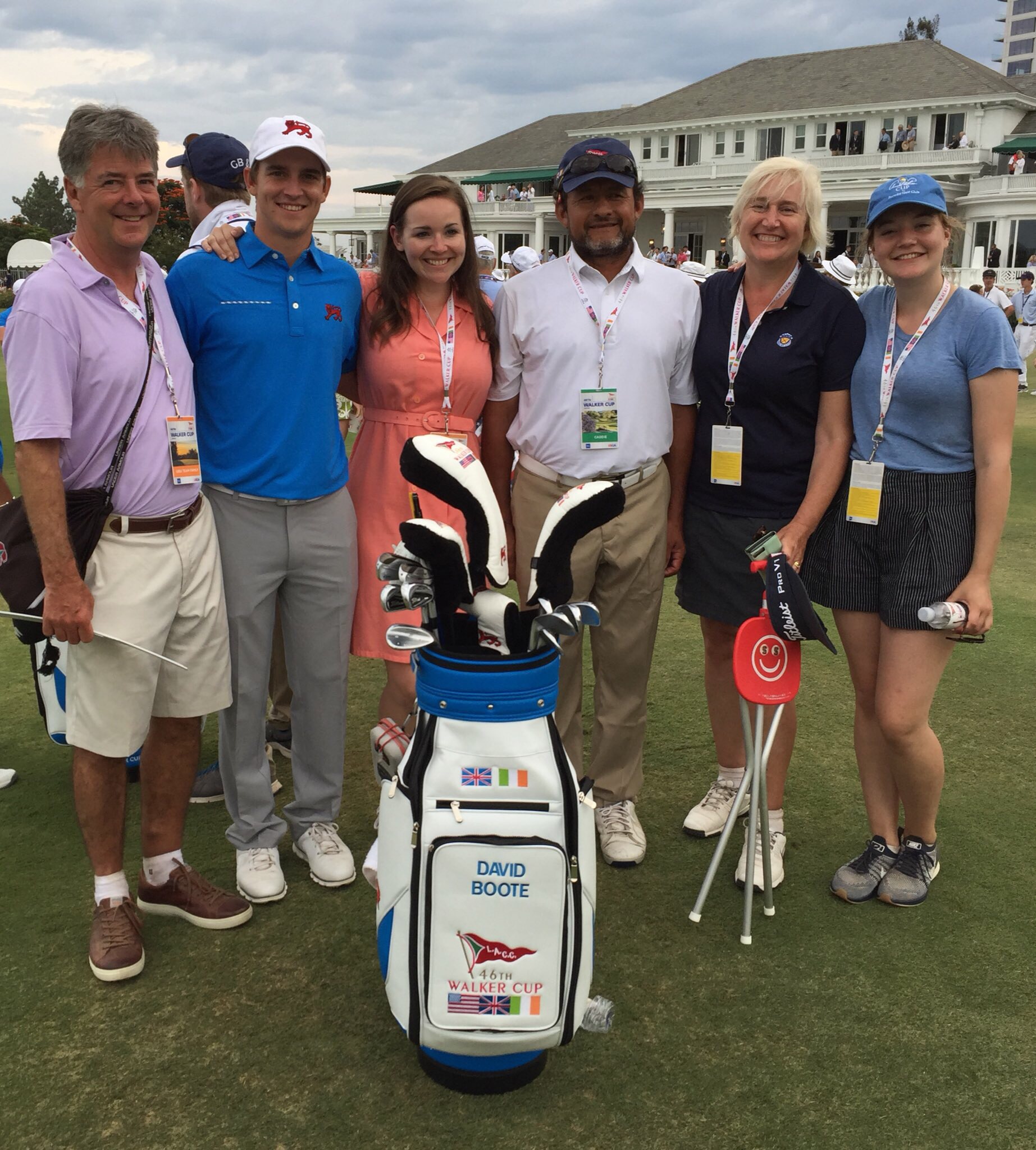 David Boote Celebrates His Singles Win With His Family And Caddie (Photo: GolfBible)

To view the USGA highlight packages of the final day’s play please take a look at my ‘Past Results’ page.

As one would expect GB&I Acting Captain Andrew INGRAM accepted the loss in good spirit. He said: “The Americans were amazing. I’ve got to take my hat off to them. They have been superb all week and good luck to them. We just couldn’t get going, we couldn’t get anything moving forward. The big advantage here has been the length of the course, our guys aren’t used to courses this long. We have worked hard. I asked the team when I came for 100 percent and they gave me 100 percent. I can’t ask for anything more.”

Asked how he thought GB&I could improve their away performances Ingram suggested: “I know it costs money but any chance of us getting our Squad out to America to let them see what it’s like, come to the venue, and play some golf so they can get a feel of it (would be beneficial). I think it’s quite a shock to the system when they come and play a course like this. Our guys aren’t used to playing courses this long.”

As always the GB&I team lacked the strength in depth of their opponents and in this match USA were able to bring this to bear, generally outplaying the visitors for the most part. Sometimes you just have to hold up your hands and accept the better team won – this was one of those occasions to my eyes.

It was always going to be a big ask for GB&I to go to Los Angeles and be competitive let alone win. After all GB&I have only ever won twice in the USA and home teams have now won 11 of the last 13 matches.

I don’t believe a lengthy post-mortem is necessary but would add from what I saw myself – and in addition to the length point made by Andy Ingram – that the USA team also putted better on the quick and undulating greens and made better strategic decisions, particularly down the stretch.

Looking forward GB&I will next get the opportunity to regain the Walker Cup on 7th and 8th September 2019 when it will be staged at Royal Liverpool Golf Club in England.

Meanwhile GB&I players David BOOTE, Jack DAVIDSON, Scott GREGORY, Robert MACINTYRE, Alfie PLANT, Jack SINGH BRAR and Connor SYME are all expected to turn pro in the coming weeks. Good luck to all of them. Not the Amateur swan song they would have hoped for but nevertheless a trip and experience they will all remember for the rest of their lives.