The team, which will be captained for the second time by John ‘Spider’ Miller, will be (in alphabetical order): – 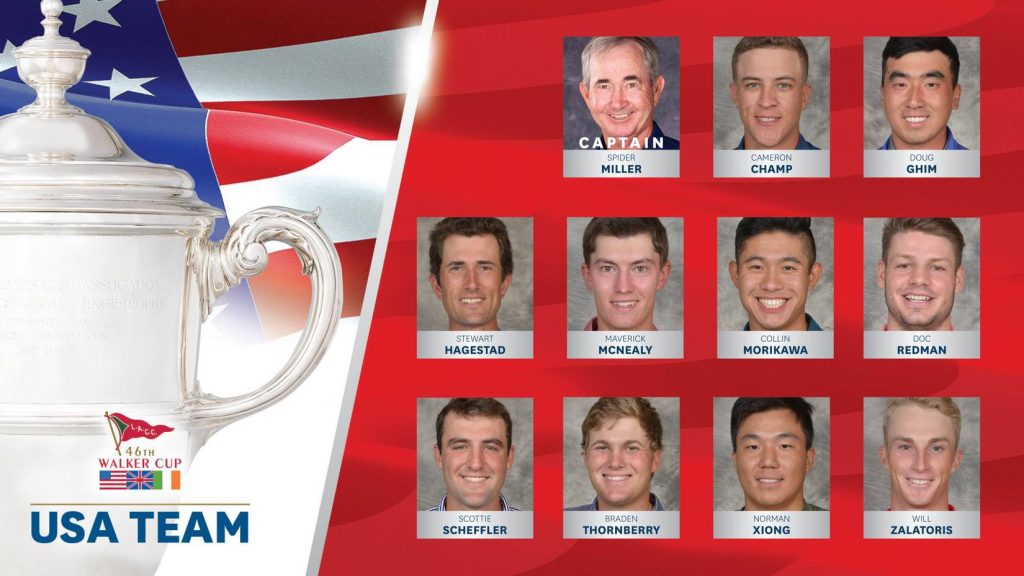 With the match being played at the Los Angeles Country Club it is interesting to note that five of the players selected are from California.

Maverick MCNEALY will be the only returning player on either side, having also competed in the 2015 match at Royal Lytham & St. Annes.

Selecting the USA Walker Cup team must be one of the hardest tasks in golf given the strength in depth available. Following the U.S. Amateur the USA had 8 players in the Top 10 of the Scratch Players World Amateur Ranking (SPWAR), 17 in the Top 20 and 30 in the Top 50.

Based on these rankings, Theo HUMPHREY (#5), Nick HARDY (#8), Sam BURNS (#9) and John ODA (#13) can all consider themselves unlucky to miss out on selection for the USA team. Allowing for current form (Norman XIONG) and the mid-amateur policy (Stewart HAGESTAD) Maverick MCNEALY is arguably the most fortunate to be included.

Looking back at the 16 man USA Walker Squad that was announced in November 2016, and who practiced at the Los Angeles Country Club in December 2016, just 6 made the final line up. The successful players being Doug GHIM, Stewart HAGESTAD, Maverick MCNEALY, Collin MORIKAWA, Scottie SCHEFFLER, and Will ZALATORIS. Those missing out were Dawson ARMSTRONG, Sean CROCKER, Brad DALKE, Gavin HALL, Nick HARDY, Scott HARVEY, Rico HOEY (turned Pro in June), Dylan MEYER,  John ODA and Jimmy STANGER.

The USGA were true to their April 2017 word concerning a softening of their mid-amateur (over 25) selection policy, reducing their ‘commitment’ from two to one. As expected Stewart HAGESTAD, the 2016 U.S. Mid-Amateur champion, was the recipient of this place. Scott HARVEY, who has also enjoyed a good 2017 season and played in the 2015 match, will no doubt be disappointed.