The recently renovated RGC Sotogrande course, presented with super fast greens, proved to be a very stern test for all of the teams competing due to the windy conditions.

This was a great win for Wales. Their total of +13 was 11 shots better than second placed IRELAND (+24) and 21 shots better than fourth placed SCOTLAND (+34). ENGLAND (+61), never really got to grips with the conditions, and finished a disappointing 12th. 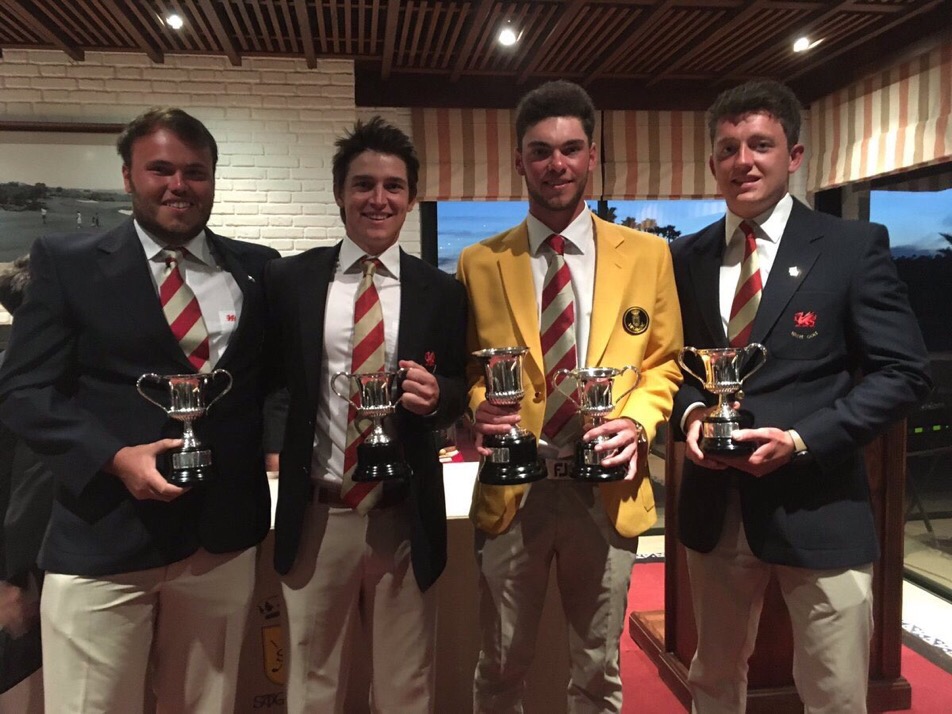 In the context of the Walker Cup it was Jack DAVIDSON who once again stole the headlines. Rounds of 70, 70, 70 and 73 (-5) gave him the Individual European Nations Cup title by 4-shots.

Whilst the overall field – consisting of 16 four man teams – wasn’t as a strong as the Spanish International Amateur Championship, which he won up the coast at El Saler last month, in many ways this was the more impressive win. No longer under the radar he certainly arrived at Sotogrande with more expectation on his shoulders. He then proceeded to complete a near wire-to-wire win holding off a select international field with a total of 20 birdies and 2 eagles.

The Newport man has certainly given himself a magnificent platform to build on with regard to his potential 2017 Walker Cup selection. For me he now has a spot on our Team and it’s his to lose.

Whilst there are nine or ten major amateur events still to be played over the next 4 months Jack has moved into the Top 10 in the Great British and Irish (GB&I) rankings, there is now less than 150 days until the team is announced and I ask myself how many of the candidates will have two major (overseas) wins to their name come the middle of August. I see no reason why he shouldn’t continue playing well and go from strength to strength. Of course, in many ways the pressure is also now off him.

Ireland’s Robin DAWSON (-1) finished second and was the only other player to complete the 72-holes under par. This was his third runner-up finish of the season.  Robin is clearly in form and building a persuasive 2017 playing record for his own inclusion in the GB&I Walker Cup team.

The fact that the Czech Republic’s Nicolas SCHELLONG (+6) was third shows the degree of separation that Davidson and Dawson achieved this week.

Scotland’s Robert MACINTYRE and Connor SYME (both +11) both battled hard to achieve a tied 7th finish. I have already said in previous articles that both of these players, along with Scott GREGORY (over in Augusta, ahead of The Masters) are certainties in my GB&I Team, so their continued solid play was good to see.

Davidson’s teammates Owen EDWARDS and David BOOTE (both +12) finished tied 10th. No one would be surprised to see Edwards continue in this vein given his closeness to Jack – he won’t want him having all the glory for long ! I am also pulling for Boote who has been one of GB&I’s leading players for a few years. Having graduated last year from Stanford his knowledge of the U.S. opposition, California and the Los Angeles Country Club course, which I imagine he has played, would probably be useful for the Team.

Irish pair Alex GLEESON and Stuart GREHAN (both +15) finished tied 16th. These results would have been much higher save for disappointing final days; Gleeson shooting 80 and Grehan 82 after both made poor starts on Sotogrande’s front nine. Both remain very much in the Walker Cup picture.

With Davidson and Dawson, neither of whom were selected for the initial GB&I Walker Cup squad but both presumably being added as I write, continuing to play well the GB&I selection story remains intriguing. What is clear is some of the ‘early favourites’ for inclusion need to find some form and results – and quickly. The Lytham Trophy early in May will be everyone’s next opportunity to shine.