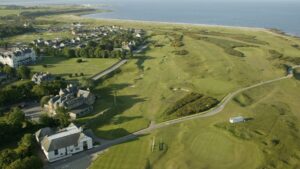 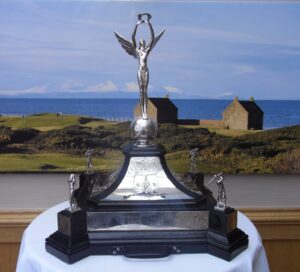 The 2018 Men’s Home Internationals were played at Conwy Golf Club in Wales between 12th and 14th September.

ENGLAND won the tournament beating IRELAND 9 – 6 in the final day’s championship match. Ireland had won the event four years in a row but had to settle for second this year. 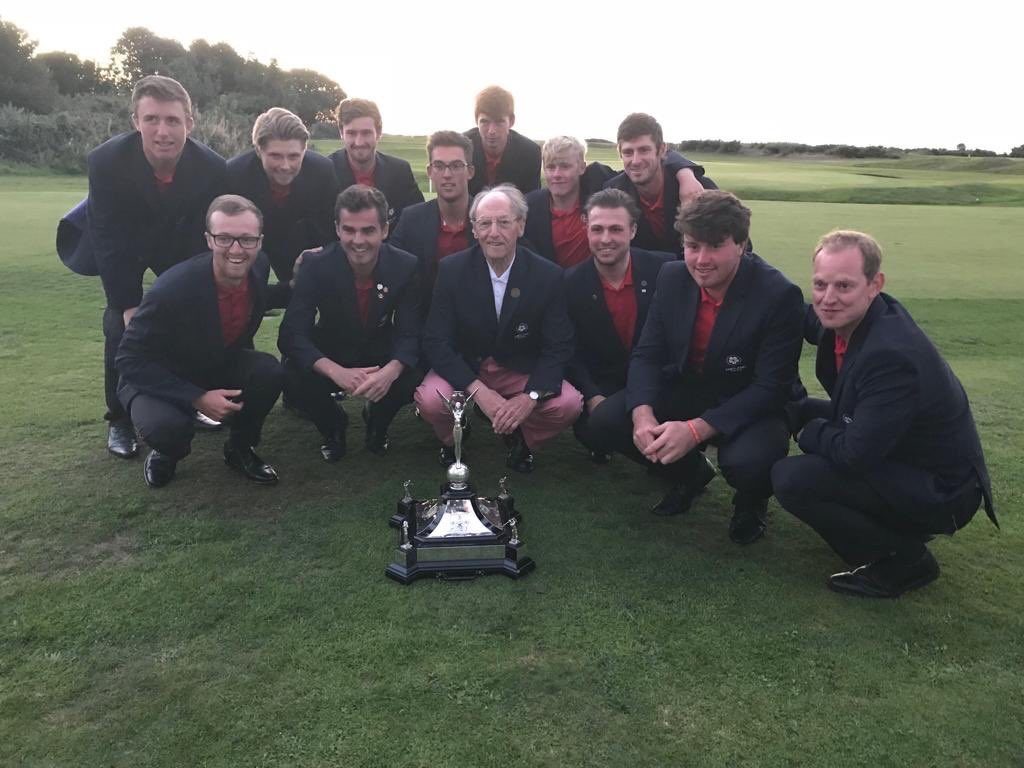 The England Team With The Raymond Trophy (Photo: Wales Golf)

11-man teams play against each other in a round robin format. There are five foursomes and ten singles match play games contested in each match. The overall winner is the country with the highest number of match points. 1 point is awarded for a win, 0.5 for a half and 0 for a loss. 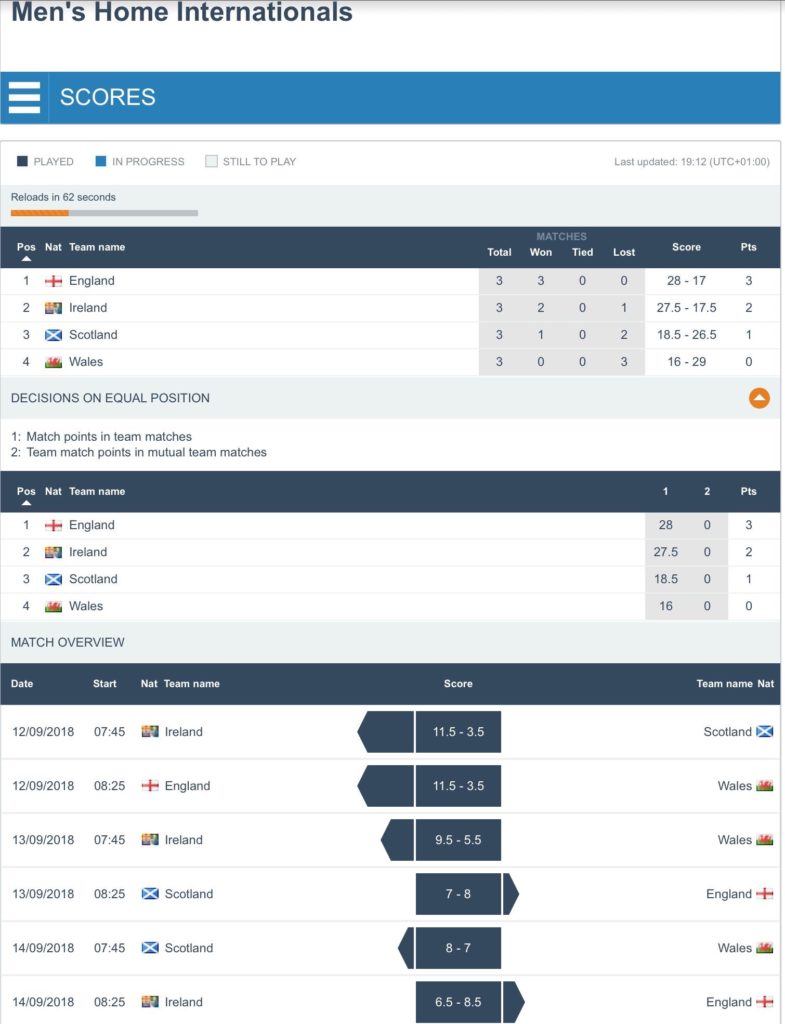 With the exception of some lads who had returned to their U.S. Colleges earlier in September we had the 11 best players from each of the home nations playing competitive foursomes and singles match play golf in Conwy.

Even a year before the next Walker Cup match, and accepting that some of the participants may turn pro in the coming months, this was clearly a good event for a prospective 2019 player to find and establish a foursomes partnership and to hopefully record a few singles wins. The GB&I selectors will certainly have been watching.

Here is an analysis of the English and Irish individual performances at Conwy: – 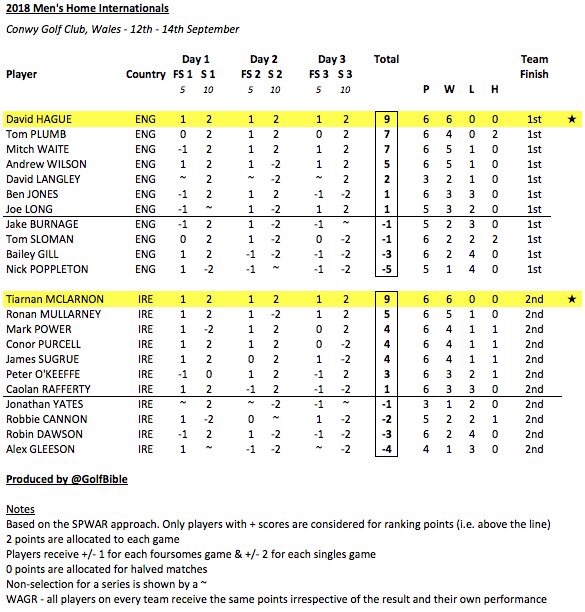 It was a great week for David HAGUE (ENG) and Tiarnan MCLARNON (IRE) who both finished the tournament with 100% records, winning all six of their games.

Tom PLUMB (ENG) was also unbeaten, winning four of his games and halving two of his foursomes.

David HAGUE and Andrew WILSON (ENG) won all three of their foursomes games leading England out in all three matches, which normally means you are playing your opponents best pairing.

Tiarnan MCLARNON and Ronan MULLARNEY (IRE) also won all three of their foursomes matches albeit they were sent out in the fifth game on each day. Another Irish pairing, Conor PURCELL and Mark POWER, also impressed winning two games and halving the other.

The 2018 Men’s Home Internationals reaffirmed the view that our 2019 Walker Cup team is likely to be dominated by English and Irish players.

Looking at the Scottish and Welsh individual performances:- 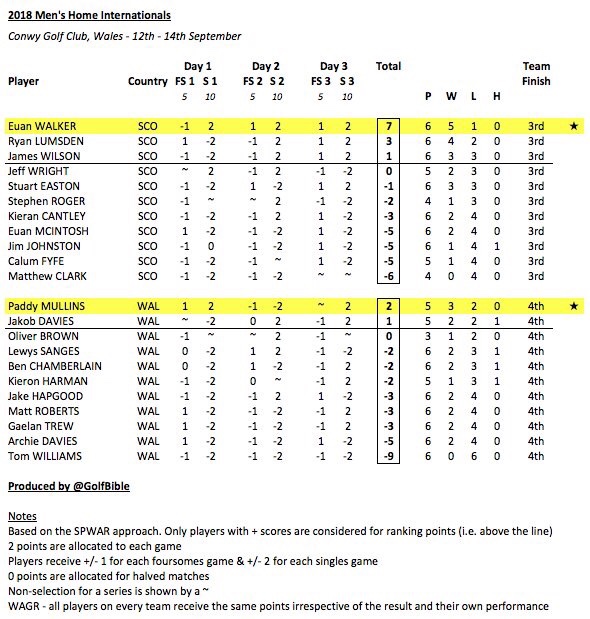 Euan WALKER was outstanding for Scotland winning five of his six games. Likewise Ryan LUMSDEN did his prospects no harm with four wins.

Paddy MULLINS did well for Wales and will have been particularly pleased with his two singles wins.

It appears that the Scottish and Welsh contingent will need to up their games over the next 12 months if they are to have anything other than a modest 2019 Walker Cup representation.

The 2019 Men’s Home Internationals will be played at Lahinch Golf Club in Ireland. The England Golf website suggests that has been scheduled to be played on 11-13th September next year, the week after the Walker Cup match.

In 2017 the Home Internationals were brought forward to August so that they could in theory be used to assist with GB&I Walker Cup team selection. However, because the 16-18th August dates then clashed with the U.S. Amateur it proved to be largely pointless as a competition and as a final selection trial. Just three of the final 10 man GB&I team competed at Moortown in 2017 with most of our leading amateurs choosing to play in the U.S. Amateur.

It is disappointing that the four home nation golf unions can not come up with a date in early August next year so that the Men’s Home internationals can properly fulfil it’s potential role in our 2019 Walker Cup preparations. 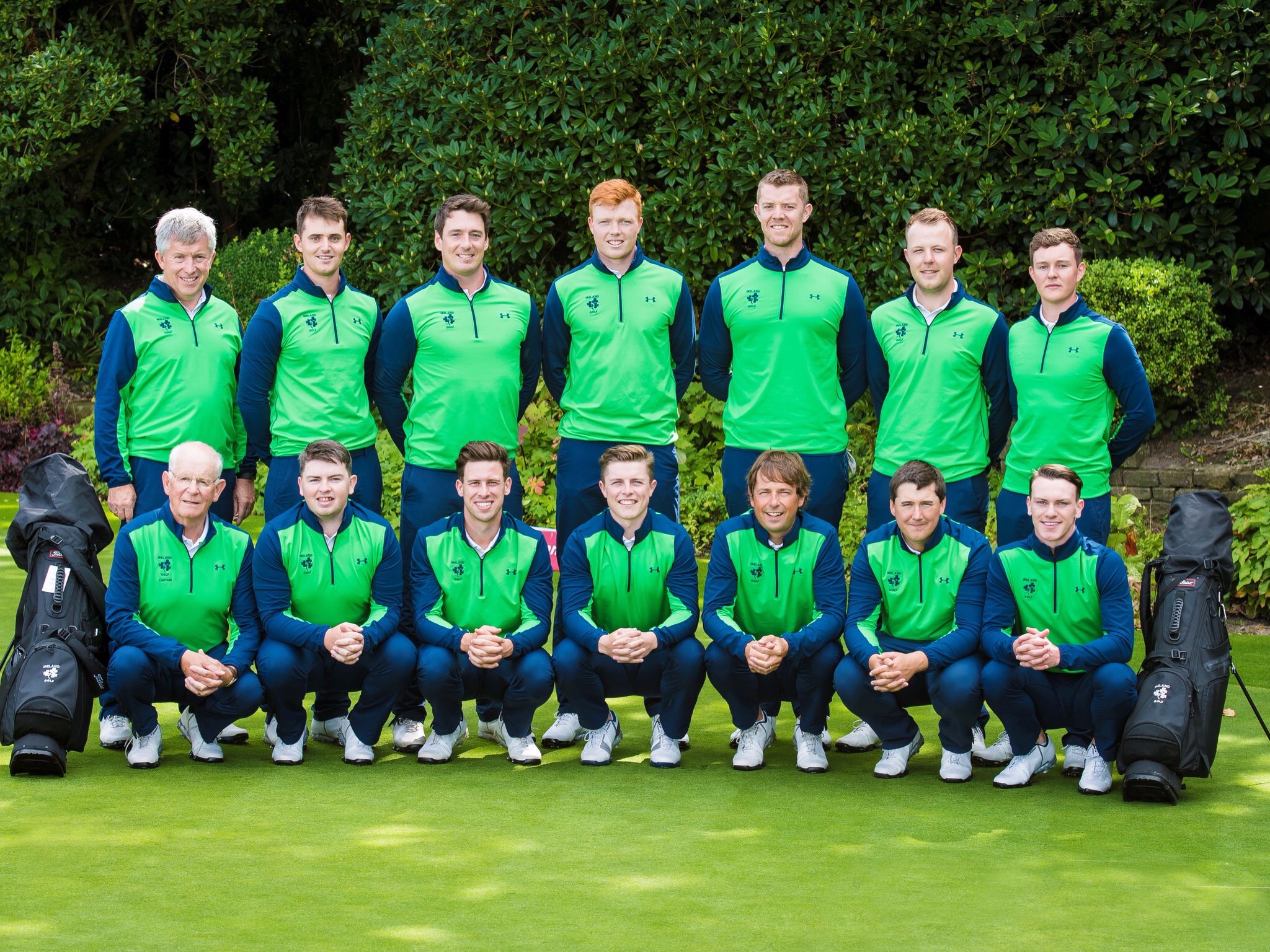 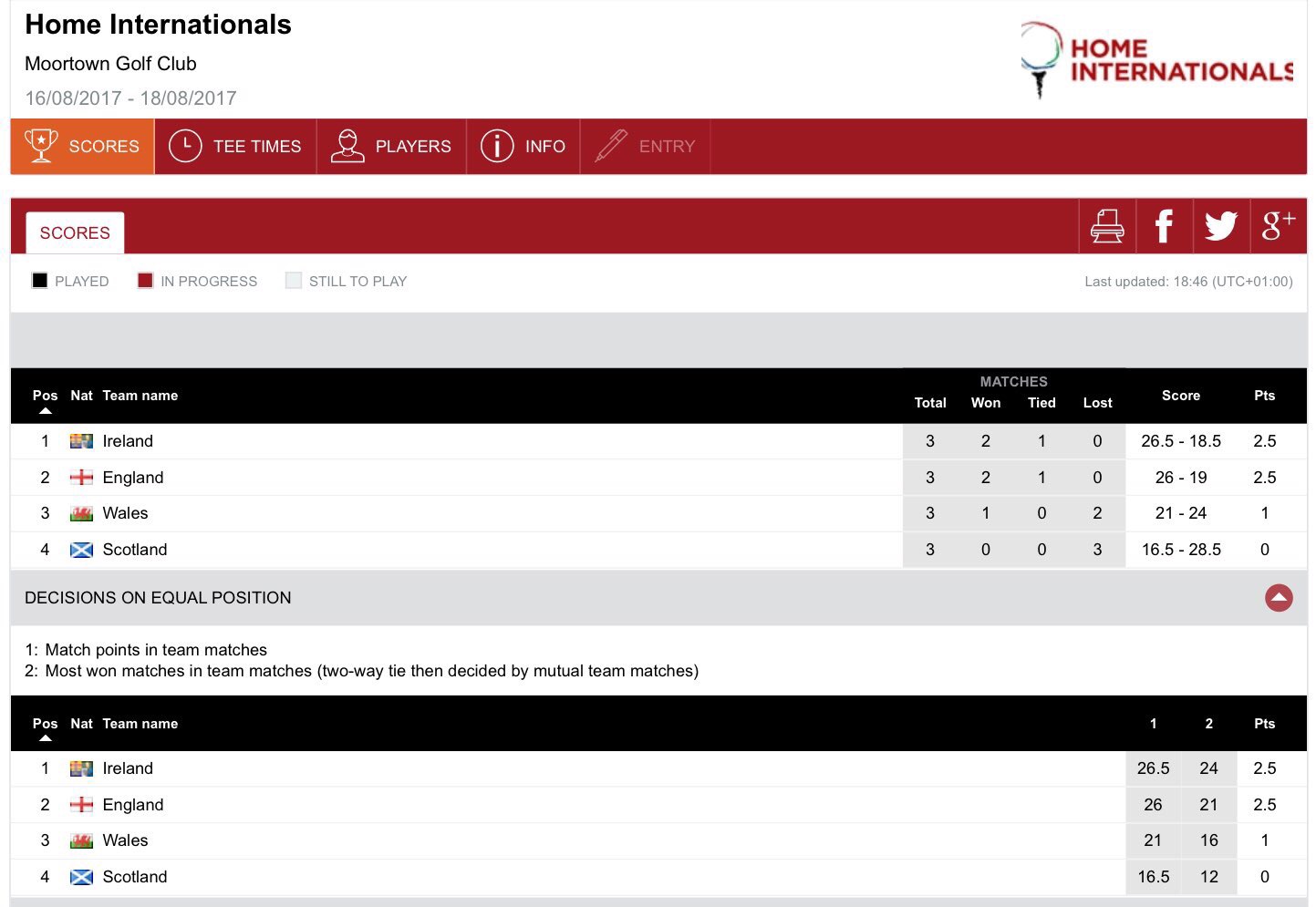 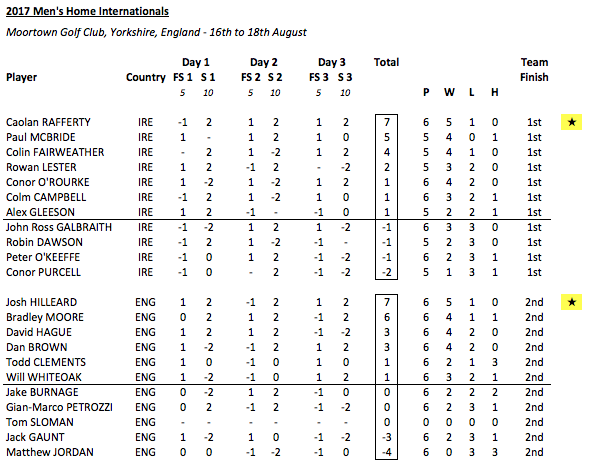 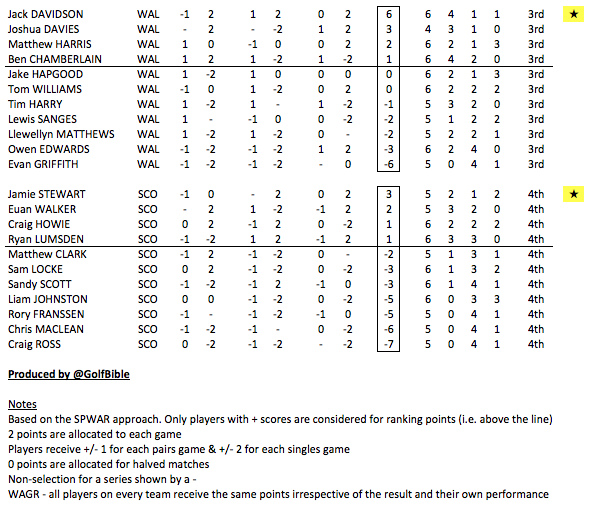