The R&A has announced that Sandy SCOTT has been forced to withdraw from the Great Britain and Ireland (GB&I) Walker Cup team due to a wrist ligament injury.

Scott first picked up the injury in October 2020 and subsequently underwent minor surgery in January. He had originally been expected to return to competitive action for Texas Tech University in mid-March. However, having missed a number of recent college events it had become clear that his recovery was not going as planned.

The R&A had been obligated to select Scott at the end of March, despite his lack of recent play, due to him being one of the two highest ranked GB&I players in the World Amateur Golf Ranking. He was 8th in WAGR and GB&I’s highest ranked player when the Selection Committee met.

Jack DYER will now step up from first reserve to take his place in the GB&I side that will play USA in 24 days time at Seminole Golf Club on 8th-9th May. Dyer enjoyed an excellent tour of South Africa earlier this year and should arrive match fit and with confidence. 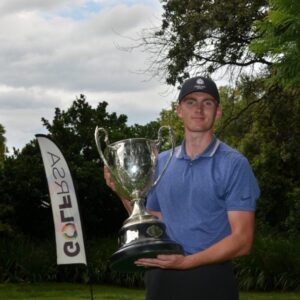 Following this change the GB&I team will now consist of 8 English players and 2 Irish with no Scottish or Welsh representation.

Florida-based Englishman Joe PAGDIN (19) has been added to the squad as second reserve. The University of Florida freshman has plenty of experience and has previously successfully represented GB&I in the Jacques Leglise Trophy and England in the R&A Boys’ Home Internationals and the European Boys Amateur Team Championship.

School’s out for summer and it’s two English school boys that have been making most of the noise since my last report.

But have either of them done enough to make the Great Britain & Ireland (GB&I) Walker Cup team….. 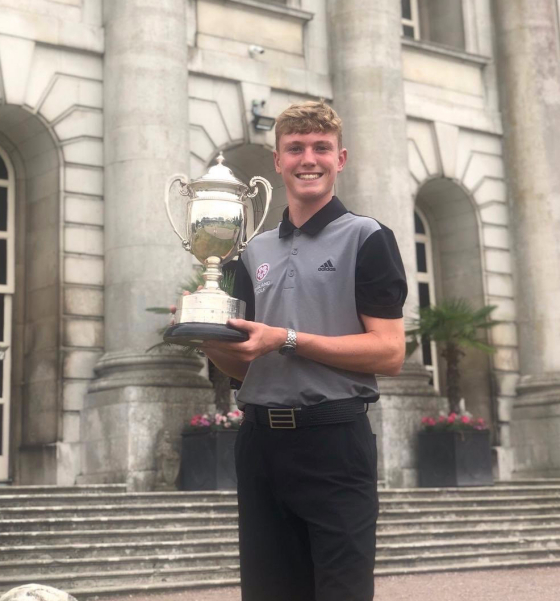 Having won the Brabazon Trophy earlier this summer he became just the fourth player to win both the boys’ and men’s English Open Amateur Stroke Play titles in the same year. A remarkable achievement.

Ben’s rise to No. 7 in the World Amateur Golf Ranking (WAGR), which makes him GB&I’s highest ranked player, has had a number of observers understandably calling for his inclusion in our 2019 Walker Cup team.

I am still to be convinced.

I agree with his supporters that Ben has enjoyed a great season and is clearly one of Europe’s best U18 prospects. I am just not sure he is ready for the 2019 Walker Cup match or that his inclusion would necessarily be good for his development.

He justifiably should be under consideration by the selectors but I have a question mark over his lack of experience of both men’s amateur golf and elite match play games.

I also think he may have hampered his chances with his playing schedule over the critical final weeks. Indeed I wonder if his high WAGR will actually end up being his undoing.

Ben’s top 50 WAGR ranking on 26th June gained him an exemption in to the U.S. Amateur Championship which he is taking up. Play starts at Pinehurst in North Carolina on Monday 12th August.

The U.S. Amateur clashes with The R&A’s Boys’ Amateur Championship which is being played at Saunton. Ben would clearly have been one of the favourites for this title.

Ahead of this, for whatever reason, he chose not to enter last week’s English Men’s Amateur (30th July – 4th August) or take up his place in England’s team at The R&A Boys’ Home Internationals which start tomorrow in South Wales and finishes on Thursday 8th August.

Good performances at one or even both of these events – along with the Boys’ Amateur instead of the U.S. Amateur – could have easily pushed him over the line.

As it is all of his eggs are now in the U.S. Amateur Championship basket. Only time will tell if this strategy proves to be a successful one. If he makes the match play stage and can win a few games he will deserve his place in our team.

If Ben is selected he will probably become the first player to receive the honour without ever having played in any R&A Championship or selected GB&I team beforehand. His rise has been that meteoric.

In many ways Conor GOUGH was last year’s Ben SCHMIDT. A string of wins albeit exclusively at the boys’ level. The main one of course being the prestigious Boys’ Amateur Championship at Royal Portrush.

Conor was selected for the original GB&I Walker Cup squad but due to focussing on his exams played none of the major amateur events during May and June. As a result it was no surprise to see him left out of the reduced 16-man squad a few weeks ago.

Like Schmidt Conor also received a WAGR generated exemption into the U.S. Amateur Championship on 26th June. However, and I accept their circumstances were different, Conor chose to play the English Men’s Amateur and will be participating in the Boys’ Home Internationals before travelling to the United States.

In a stunning performance Gough won the English Men’s Amateur beating Callum Farr 3&2 in the Final at Hankley Common. On the way to the final he beat Jamie Li, Joshua McMahon, Curtis Knipes and Jake Burnage, once again highlighting his match play pedigree. 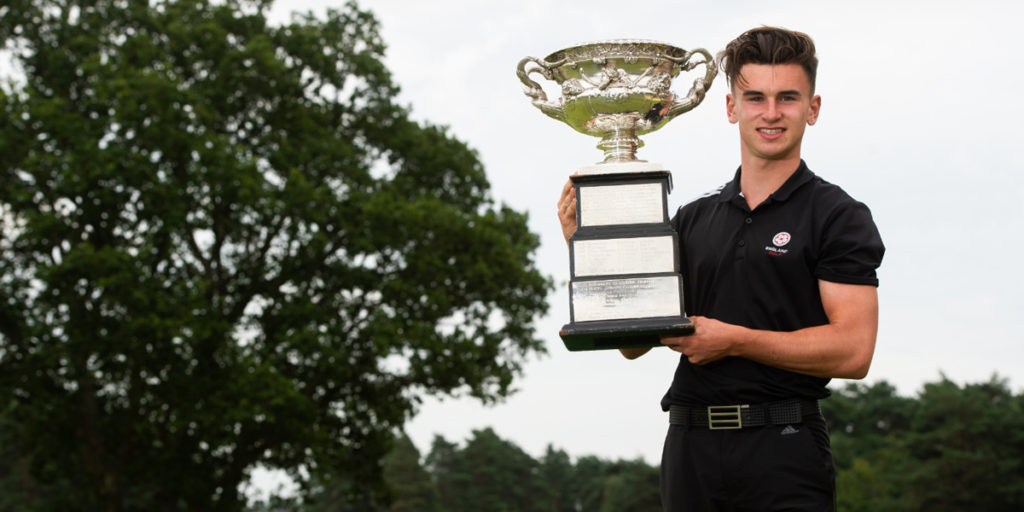 This win inevitably brings Conor back to the table for GB&I Walker Cup selection.

Another major match play victory by the Englishman within two weeks of the 2019 selection date is hugely persuasive.

However, as you will see below I am not yet ready to add him into my team. As Aristotle said ‘one swallow does not a summer make’ and I need to see more.  However, if he does well this week at Ashburnham and shows up at the U.S. Amateur Championship he could very easily force his way in to the final line up.

Conor Gough was clearly the star of the show at the English Men’s Amateur but in the context of the Walker Cup perhaps the real winner was fellow Englishman Jake BURNAGE.

Eight of the ten English members of the 16-man Walker Cup squad competed in what was, at least for me, an unofficial Walker Cup eliminator. It is after all a large group of English players that are in effect competing for the five remaining places.

Burnage ended up being the leading player out of the eight. Playing under some pressure he reached the Semi-Finals, winning four match play games, having also qualified well in 9th on 138 (-3). It was just the result the Devonian needed having already placed the St. Andrews Links Trophy on his C.V. in June.

Of the two missing players Harry HALL withdrew a week before to return to Las Vegas and I believe will not be playing again before the team is selected. Ben JONES chose to play in the Western Amateur Championship and will stay in the States before playing in the U.S. Amateur.

Unfortunately in the context of this year’s Walker Cup selection this win is unlikely to bring Archie back into the discussion. He is another good young player who has every chance of making future teams though. 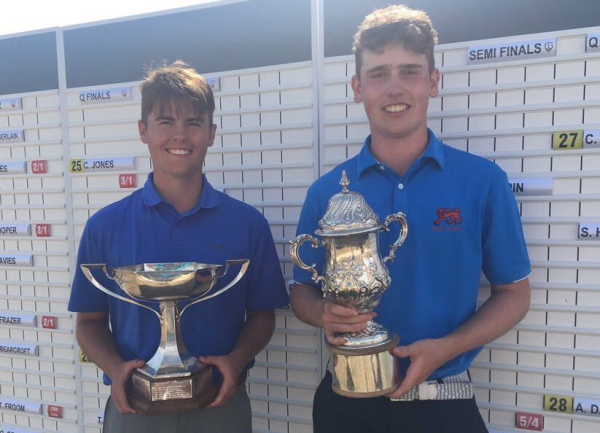 Unfortunately none of the remaining Scottish or Irish Walker Cup panelists – Sandy SCOTT,  Euan WALKER, Mark POWER, Conor PURCELL, Caolan RAFFERTY and James SUGRUE – entered so it is hard to see how these Championships will impact the Walker Cup selection.

George BURNS beat Lewis IRVINE in the final of the Scottish Amateur on their 19th hole at Crail Golfing Society.

With the exception of Power, the other three Irish lads are playing in the U.S. Amateur next week and therefore were unable to enter due to the clashing dates.

7th August Update
Ronan MULLARNEY, who also won the stroke play qualifying by 6-shots, beat Rob BRAZILL in the final of the Irish Amateur by 1 hole at Ballybunion G.C.

The previous week also saw the playing of the South of Ireland Amateur Championship at Lahinch G.C. (on the 24th-28th July).

Five Irish Walker Cup panelists, four of whom attended the practice session at Hoylake which clashed with the Stroke Play Qualifying, were given byes into the Match Play competition.

Unfortunately all of them struggled to make much of an impression. John MURPHY reached the Quarter Finals but James SUGRUE, Mark POWER, Conor PURCELL and Caolan RAFFERTY all lost their Round 2 matches.

Two weeks today, the day after the U.S. Amateur Championship has concluded, I believe the GB&I Walker Cup squad will be announced.

Here are my current thoughts on the team and likely foursomes pairings as at 5th August: –

In summary I am sticking with the ten players I selected on 14th July in my article ‘107. Learnings From The European Team Championships’.

SCHMIDT and GOUGH in particular are knocking on the door after their recent wins but I am struggling to see who I would take out to accommodate them at the moment.

It is of course never over till it’s over……

A handful of major events are still available to the players to impress the selectors over the next two weeks. Here is a list off the four I will be focussing on:-