Yesterday saw the conclusion of the Men’s and Boys’ European Team Championships played respectively in Sweden and France.

Both Championships combined 36 holes of stroke play qualifying with three rounds of match play, including foursomes and singles.

ENGLAND finished 2nd, disappointingly losing in the Final for the third year running, this time to host’s Sweden. In what proved to be a good Championship for the home nations SCOTLAND finished 3rd, IRELAND 5th and WALES a very creditable 6th.

Here’s my assessment of the individual GB&I men’s team performances. You will appreciate this is an art not a science but I am confident the list is broadly correct. 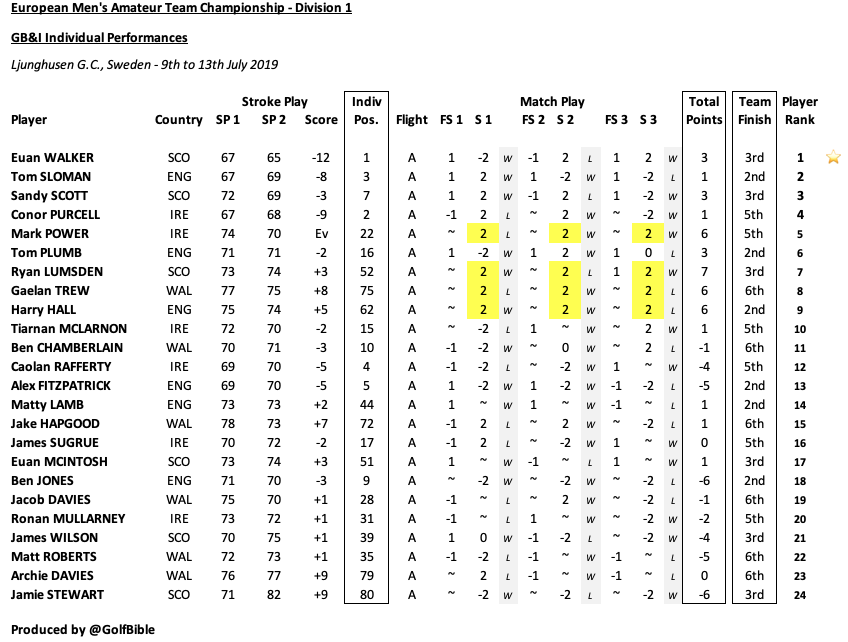 Euan WALKER (SCO) continued to enjoy his rich vein of form, winning the stroke play qualifying easily and playing relatively well in the match play stage. If he had won all of his match play games he may well have risen to No. 1 in the Scratch Players World Amateur Ranking; as it is he has stayed in 4th but the gap has been closed.

I have been bullish about Sandy SCOTT (SCO) for the Walker Cup for some time on the back of his strong play for Texas Tech in the U.S. this season. Sandy performed very well in Sweden fully justifying my faith in him. It’s a shame that Scotland’s needs meant he and Euan Walker couldn’t be paired together in the foursomes this week.

Tom SLOMAN (ENG) and Tom PLUMB (ENG) both qualified well and won all three of their foursomes games together. Their selection and pairing looks a certainty to me now.

From an Irish perspective Conor PURCELL presented a welcome return to form right on cue and Caolan RAFFERTY ticked along nicely, albeit his match play results were disappointing. However, Mark POWER (IRE) is the player that really grasped the opportunity presented by this event. A solid qualification was followed by singles wins (playing at No. 2) over John Axelsen DEN (4&3), Maximillian Hermann GER (20th) and Jacob Davies WAL (19th).

Ryan LUMSDEN (SCO), Gaelen TREW (WAL) and Harry HALL (ENG) also won all three of their singles in Sweden. Interestingly they all qualified poorly over the opening two days but clearly found something as the week progressed. In the context of the Walker Cup the wins were particularly useful for Hall.

Ben JONES ENG, who had played so well at the Amateur Championship a few weeks ago, qualified strongly but lost his way in the match play stage losing all three of his games.

From a Walker Cup perspective it would have been good to see Hall and Jones given a foursomes run out at some point as they are both strong candidates for selection and this is therefore a possible pairing.

Alex FITZPATRICK ENG followed a similar path to Jones, qualifying well before losing all three of his singles, albeit each by the slender margin of 1 Hole.

In addition to Trew Ben CHAMBERLAIN was the standout for Wales, qualifying in 10th and enjoying a good win over Ronan Mullarney on the final day.

Only IRELAND and ENGLAND played in the European Boys Team Championship in Chantilly, France. Ireland finished 4th and England 5th as France took the title.

SCOTLAND and WALES played in the Division 2 Championship in Poland. 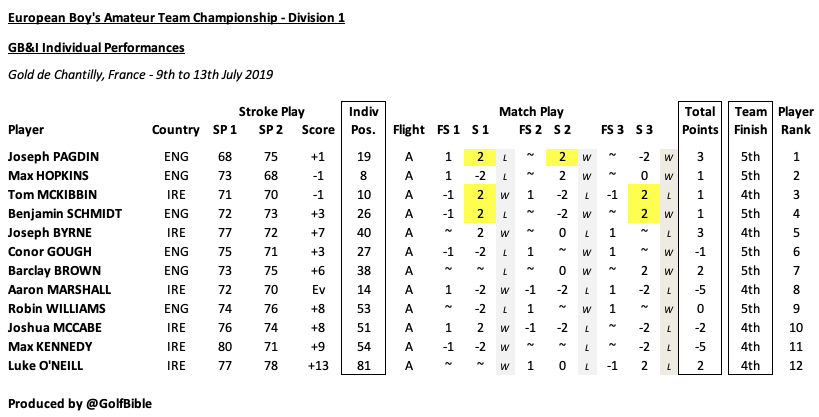 Pagdin, who won all four of his games in last week’s AJGA Wyndham Cup in North Carolina, continues to show encouraging match play form. If he had held on to his lead over the final holes of his Round 2 match against Tom Sloman in The Amateur I may be talking him up even more now.

Pagdin and McKibbin both fly to the USA today for this week’s U.S. Junior Amateur. They will need to go deep, as will Ben Schmidt in the U.S. Amateur in August, to have a chance of making the GB&I Walker Cup team.

Pagdin and McKibbin also have the opportunity to make a late Walker Cup case in the Boys’ Amateur Championship being played at Saunton G.C. in August. Both played well in this event last year at Royal Portrush G.C.

The Boys’ event clashes with the U.S. Amateur which is why Schmidt won’t be in Devon. Indeed it is possible that Pagdin may also be a late qualifier for the U.S. Amateur having now moved into the World Amateur Golf Ranking Top 50.

All three are of an age and have the potential to play multiple Walker Cup’s for GB&I but the 2019 match now looks like coming too soon for them.

The GB&I selectors will be finalising their reduced Walker Cup squad this weekend with an announcement expected tomorrow.

The next squad training gathering is being held at Royal Liverpool G.C. on 23-24 July.

If the decision was mine I would select 16 players giving me 8 foursomes pairings to work with at Hoylake.

Here are my current thoughts on the team / squad and pairings (all in selection order): –

Since my last squad selection I have taken out Matty Lamb and Alex Fitzpatrick and added Mark Power to the second group solely based on their performances at the European Men’s Amateur Team Championship.

The final group of players, for a variety of reasons, simply haven’t done enough to stay in my Walker Cup squad.