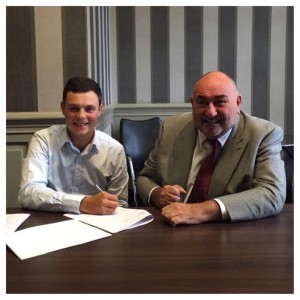 The omission of Northern Ireland’s Cormac Sharvin from yesterday’s World Amateur Golf Rankings (WAGR) update hinted that something was afoot for the man from Ardglass GC.

A few enquiries later and it was confirmed that Cormac had turned Pro on Tuesday.  You will recall that he was one of the stars of the winning 2015 Great Britain & Ireland Walker Cup team delivering a 3 out of 3 100% win record.

With Paul Dunne, Gary Hurley and Gavin Moynihan all turning Pro shorty after the 2015 Walker Cup had finished that now leaves just Jack Hume from the ‘Famous Five’ (Irish players) still in the amateur ranks.  In addition to Jack the only other team members to remain amateur are the three Scottish lads, Ewen Ferguson, Grant Forrest and Cormac’s foursomes partner Jack McDonald.

The timing and lack of fanfare, i.e. no announcement whatsoever, for the reigning Brabazon Trophy champion was something of a surprise to me.

Cormac had suggested after the Walker Cup that he would finish his final year at the University of Stirling.  I also thought he may wait until he had some tour playing rights before making the jump.  He confirmed to me yesterday evening that the rankings had caught him out and that he had been planning to make a formal announcement next Monday (1st February).  Presumably this will still take place when no doubt more of the story and his plans will be revealed.

Clearly something has happened to change his mind ?  A financially attractive offer, the progress contemporary Paul Dunne is making or perhaps he was simply fed up of college life – who knows.  Cormac was a late starter to golf only taking up the game at 14.  He is also older than he looks, turning 23 last October.  Whatever the reason I am sure he must feel ready and now just wants to get on with it.

He will make his Pro debut at the Oates Victorian Open next week.  This PGA Tour of Australasia event starts on 4th February at Barwon Head’s Beach Links and is unusual in that men and women play together.  Well known Australian left-hander Robert Green is the defending men’s champion.  Cormac’s entry stands out a little – Tournament Information.

Good luck to Cormac ! His infectious enthusiasm, competitiveness and strong play, all evident at Royal Lytham last September, will hopefully ensure he makes a smooth transition to the paid ranks in 2016.