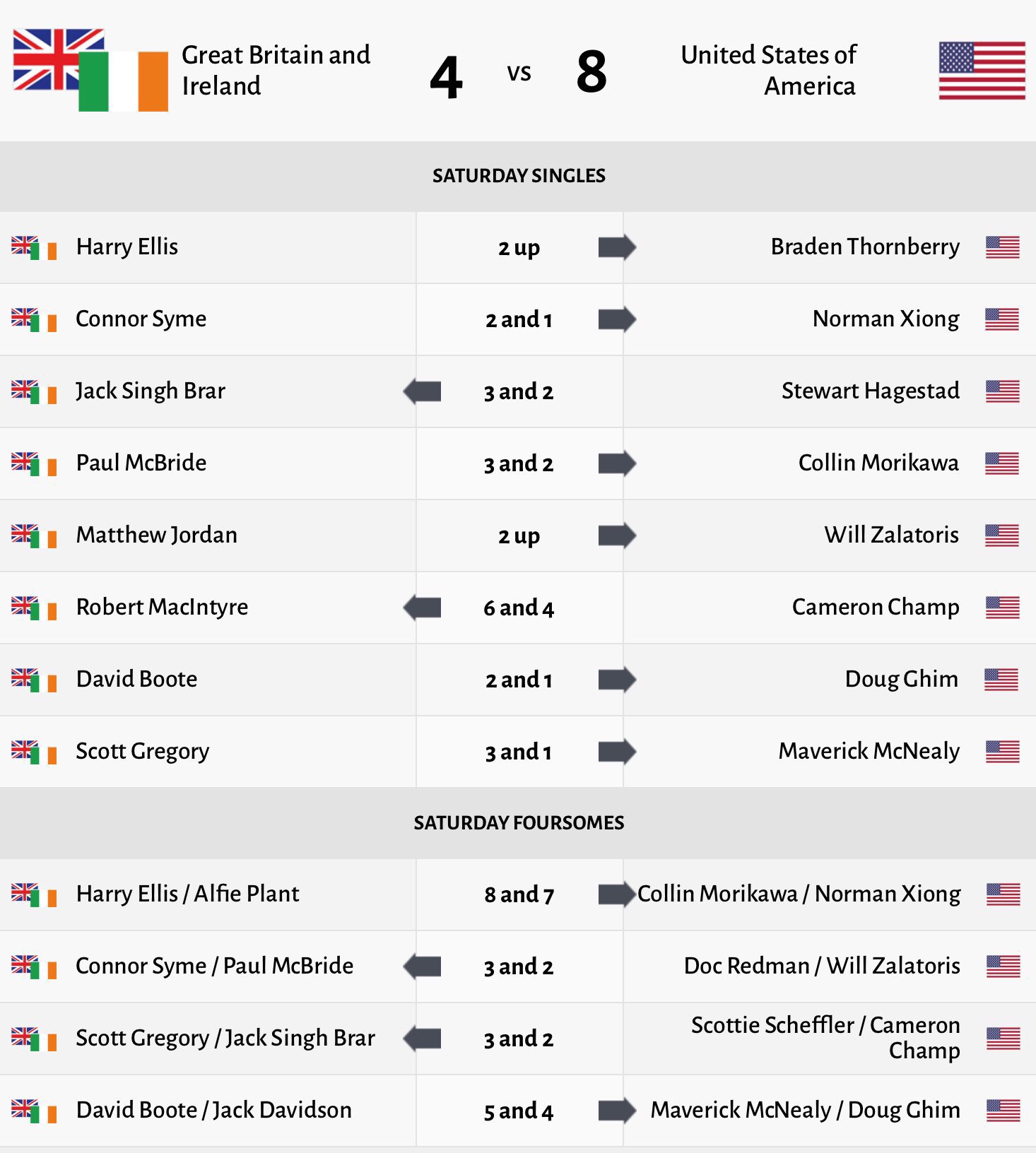 I followed the match between Connor Syme / Paul McBride and Doc Redman / Will Zalatoris. The GB&I pair both played well once they had got over their initial nerves. The defining factors were the USA’s poor play on the par 3 holes (they bogeyed all three), McBride’s accurate approach play and most importantly Syme’s putting. The Scotsman holed 9 missable putts from within 10 feet which either halved or won holes. In the end they ran out comfortable winners. 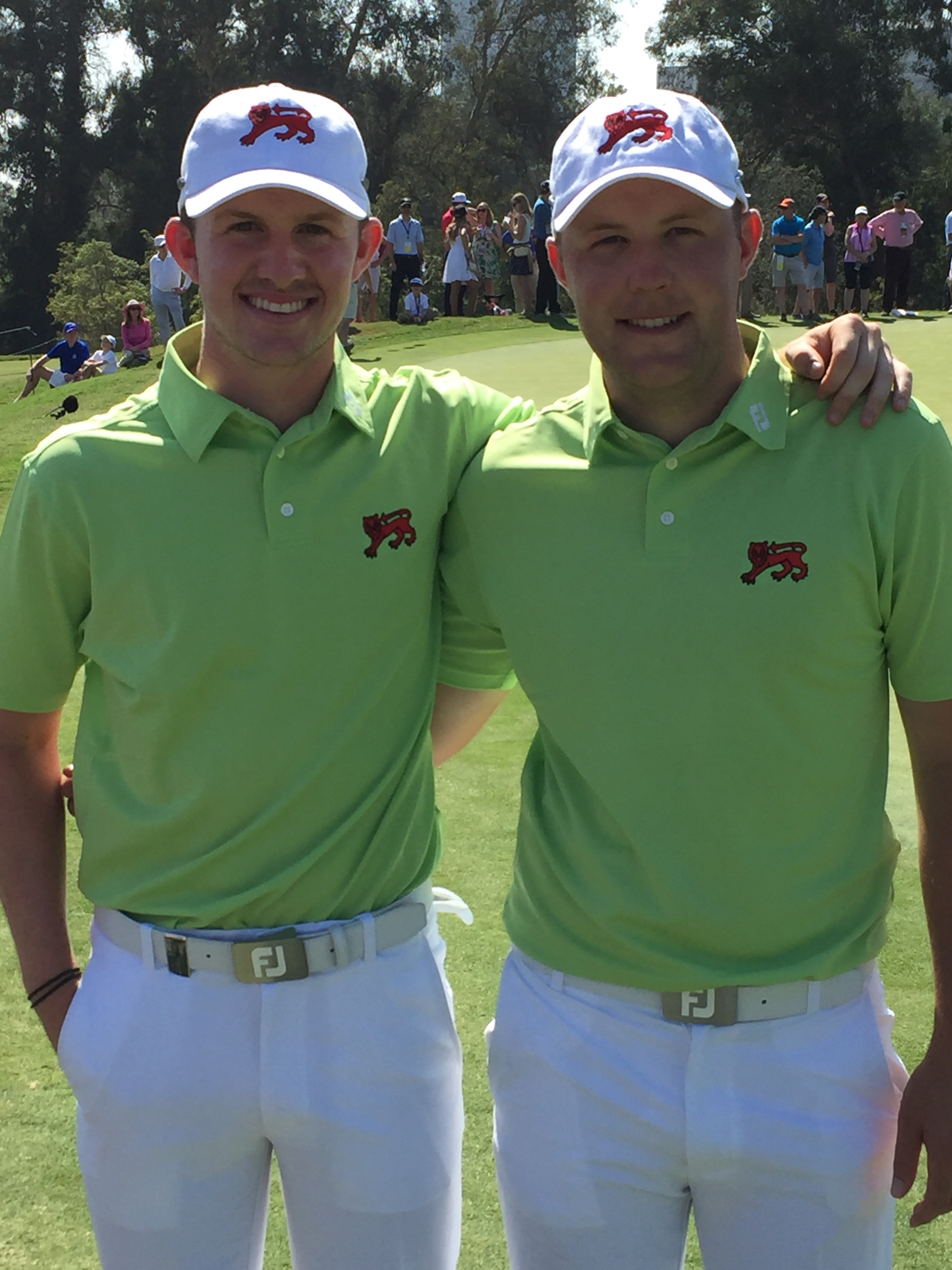 Scott Gregory and Jack Singh Brar beat Scottie Scheffler and Cameron Champ 3&2 to ensure the Day 1 Foursomes finished halved 2 – 2. In what was a tight match up until the turn the USA pair simply fell away on the back nine handing the game to GB&I with two bogeys and a double bogey on holes 14 – 16. 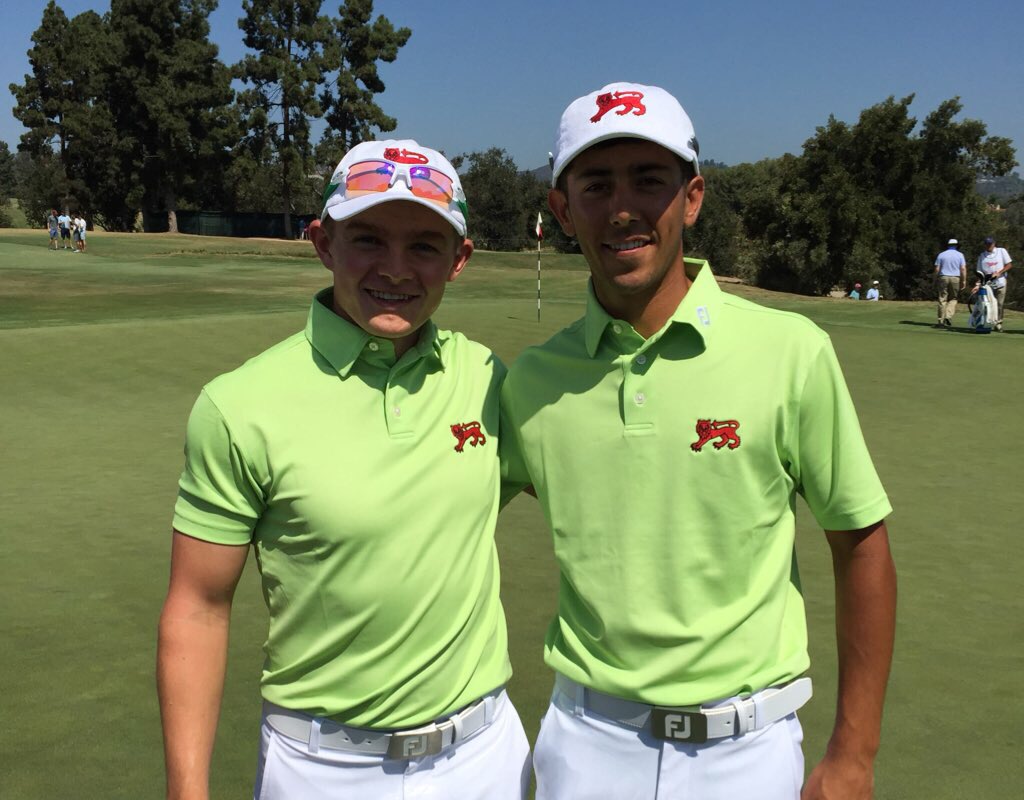 The other two matches represented humbling experiences for the GB&I pairs.

In Game 1 Collin Morikawa and Norman Xiong thrashed Harry Ellis and Alfie Plant 8&7. This was the biggest Foursomes win in 18 hole Walker Cup match history. The Americans birdied the first 4 holes winning them all and parred in to the 11th where hands were shaken. The GB&I pair were 5-over par at the conclusion. 18 year old Norman Xiong is starring in Los Angeles. He appears to have both the build and game to really make a name for himself in the future.

Maverick McNealy and Doug Ghim proved too strong for the Welsh pairing of David Boote and Jack Davidson in the final match of the series. USA birdied four of the first 6 holes to jump into a big lead which they defended comfortably with par golf. As GB&I sought to chase the game further errors allowed the USA to run out easy winners.

This session will probably prove to be the defining one of the 46th Walker Cup match. USA moved out in front and it is in all honesty hard to see how the GB&I team will be able to recover the position.

I was attracted to the match of Robert MacIntyre and Cameron Champ, having read that Bob didn’t have much family or friend support out here. Bob also has an excellent match play record so it was inevitable that he would give the big hitting American a good game. The fact he had been left out of the morning Foursomes was also likely to be a motivator for him. Whilst Champ was out of sorts, struggling for pars all the way round as well as with his short game, the Scotsman was simply outstanding. Gaining confidence as the match proceeded from his opponents difficulties Bob played a large number of great shots demonstrating an excellent all round game. By the time the match ended on the 14th green Champ was almost alone having lost his US gallery long before.

GB&I’s only other winner in the afternoon was Jack Singh Brar. He will take an unbeaten W2-L0-H0 record in to Day 2. Jack appears to have played very well looking at his hole scores. Five 3’s in his first 11 holes enabled him to take a 5Up lead on mid-amateur and LACC member Stewart Hagestad. Whilst he stumbled a little coming home he regrouped quickly to finish off a comfortable win. 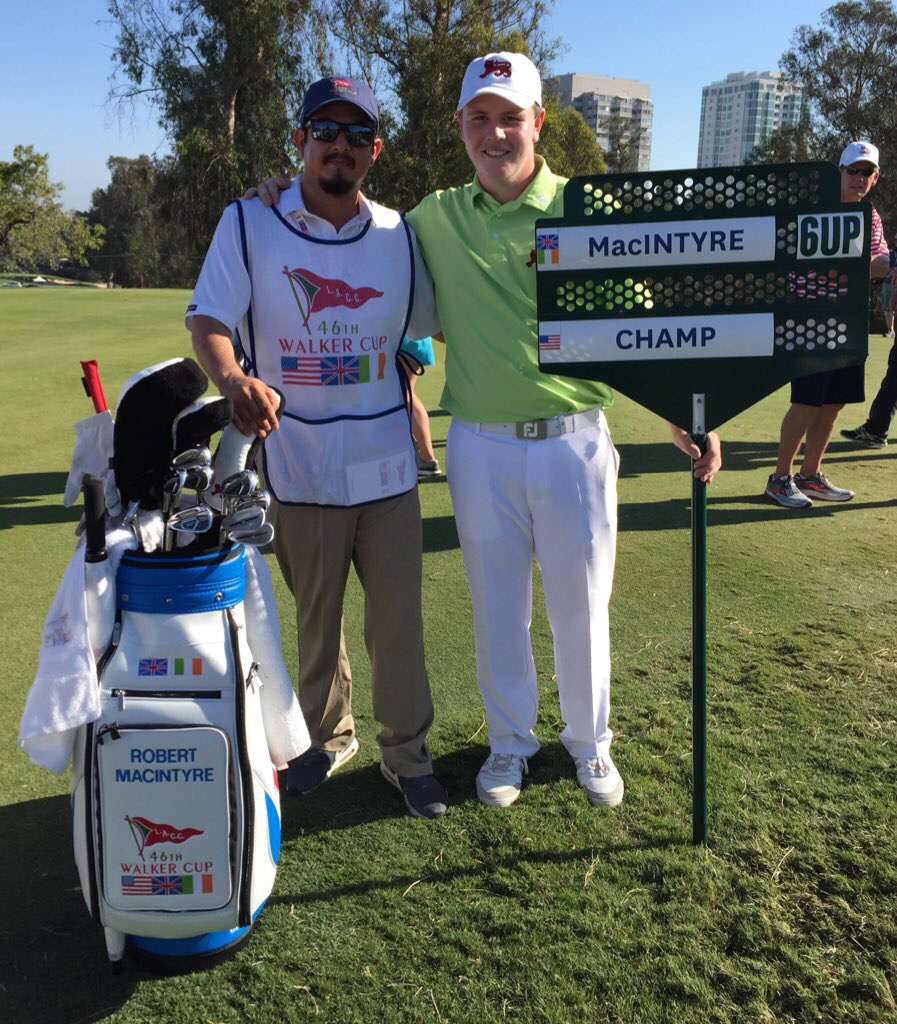 Harry Ellis was 2Up in game 1 with with 5 holes to play. Unfortunately he bogeyed three of them – poor drives being largely to blame – and allowed Braden Thornberry, surprisingly left out of the morning Foursomes, to gain a flattering 2 holes win.

Connor Syme started well, leading Norman Xiong by 3Up after 6 holes. However, once Xiong settled he quickly came back and helped by three birdies won out impressively 2&1 against one of GB&I’s strongest players.

McBride appears to have played well but was simply unlucky to draw Collin Morikawa. The Californian was 3-under for the 16 holes played before winning 3&1. Against many of the other US players Paul may well have secured a win given his overall play.

Matthew Jordan also seems to have played well in his first match at this Walker Cup, coming out on the wrong side of a tight match. Will Zalatoris played the tough finishing holes a little better to eventually win by 2 holes on the 18th.

David Boote got off to a poor start bogeying three of the opening 4 holes and going 3 Down. Once he settled the Welshman played well, showing a great deal of fight. Doug Ghim certainly knew he had been in a game by the time he had seen out a 2&1 win on the 17th green.

In the final game Scott Gregory also played well. Leading 2Up after 11 holes he fell foul of the brutal finishing holes which to his credit Maverick McNeally negotiated very impressively. McNeally ended up winning 3&1 on the 17th green.

At the end of play on Saturday the pairings / draws for Day 2 were announced.

GB&I go into Day 2 requiring an exceptional performance. A victory in the Sunday Foursomes series is essential if they are to stage a comeback and perhaps more likely add some respectability to the final score.

Unsurprisingly the GB&I pairing of Harry Ellis and Alfie Plant have been dropped with Matthew Jordan and Robert MacIntyre introduced in game 4.

Sunday sees 10 games and all 20 players out on the course contesting the Singles series.

The draw shows a number of repeat matches from Day 1 – Jack Singh Brar and Robert MacIntyre will again play Stewart Hagestad and Cameron Champ. Hopefully the results are the same on Day 2 !

Best of luck to GB&I. Let’s make USA work for every point today. 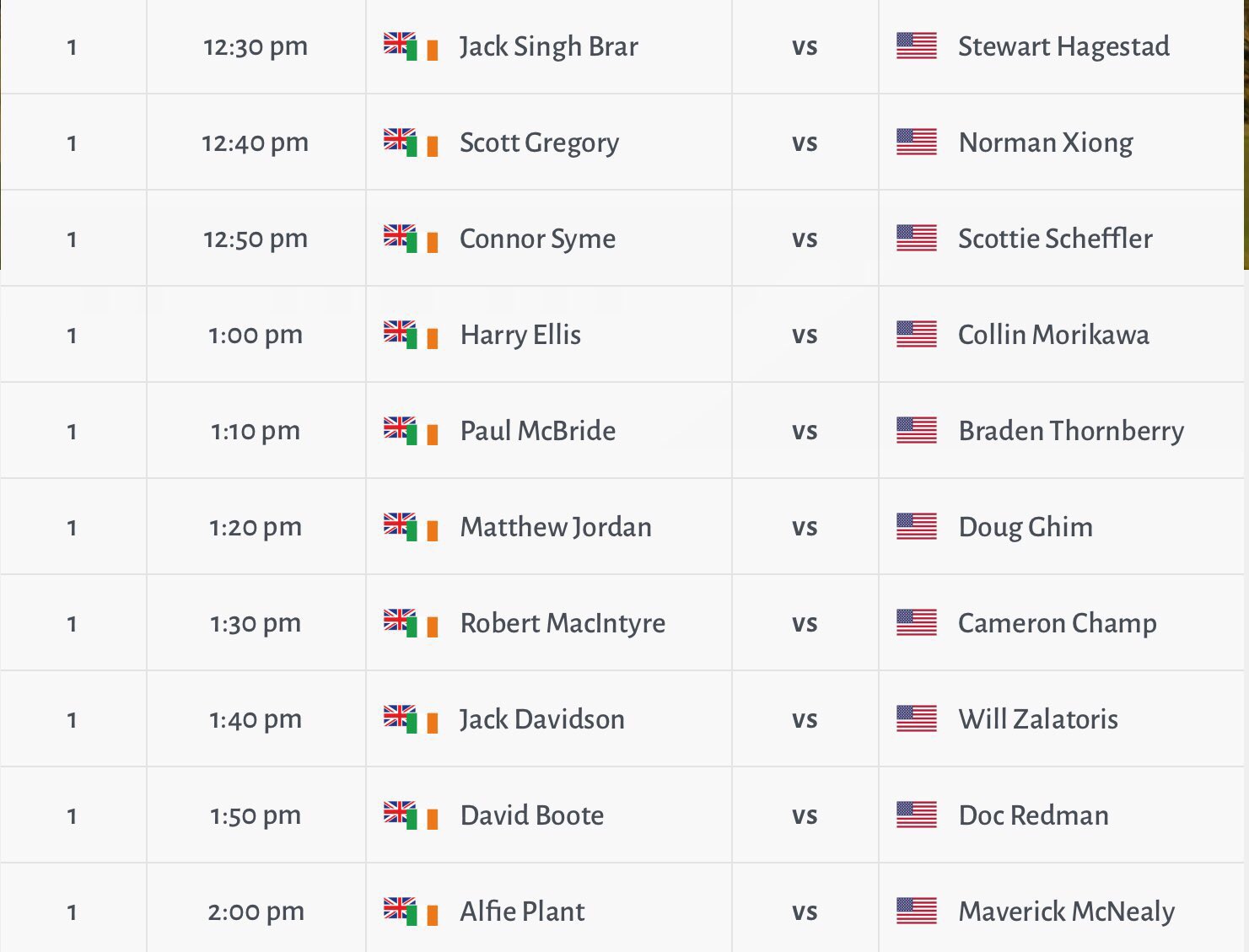