Due to the food poisoning the pre-match press conferences have been limited in scope. Here’s the most interesting stuff that has been said at Seminole to date: –

A number of years ago the whole plan was to — I was the Chairman of Selectors for the boys team and that was a bit of succession planning in there that hopefully I would take over as the Walker Cup captain and have had experience working with the guys before and bringing similar guys into the team. So 50 percent of the team we’ve had playing together in the past on Jacques Leglise teams, have played for GB&I together, and we’re all very familiar with each other to the point that it’s like old friends meeting up in some respects.

STUART WILSON:
We arrived Saturday, and we started to assemble the team from all corners of America and the UK. The first time we were all truly together was Sunday, and that’s when we came up to Seminole for our first look. We played nine holes, and since then we’ve been doing a lot of work with our team preparations on the course and within the team room. It’s been really good so far.

Everybody is coming together, bonding well, and we’ve had a few kind of special guests along the way. We had a little visit from Matt Fitzpatrick on Monday, so Matt walked the course with the guys, gave us a lot of good constructive feedback, and we had the same yesterday with Paul McGinley. Great resources to tap into and hear what they’ve got to say about the best way to kind of tackle things, not just the course but the match itself. So the prep so far has been really good.

JOHN MURPHY:
I’m just getting to know the course, I suppose, and getting familiar with our teammates. Thankfully we’ve had a great week so far. Everybody is getting on great. The atmosphere in the team room is amazing. So I think we’re all kind of on the same page where we’re just trying to prepare for the course as best as possible.

ALEX FITZPATRICK:
I think it’s such a long week to start with. From the last time at Hoylake, it was kind of like I tried to go out and play most days, and I think I ended up preparing in a way that probably best didn’t suit me, just sort of playing too much golf, and I feel like this time around, I learnt that it’s not all about playing 18 as many times as you can but pacing yourself and maybe playing nine here and there and just making sure that you don’t overdo yourself because by the time come Saturday and Sunday, you’re playing 36 a day, especially in the heat, it’s going to be tough, and you don’t want to be burned out before you even start.

ALEX FITZPATRICK:
This year’s Walker Cup has been a lot different to the one at Hoylake. COVID is such an unfortunate thing. The experience has still been phenomenal and it’s still everything I could have asked for, but just little things like having to sit six feet away from people at dinner and not being able to be with your team all the time is frustrating, but it’s something that you have to do and you have to live with, and the week itself is still going to be amazing.

COLE HAMMER:
(I’m) really just trying to get the guys fired up to compete for their country because I remember standing on the first tee last time and how cool of an experience it was. I also remember how fast it was over. So I want to kind of encourage the guys to really sit there and soak it in and enjoy it because this is a once-in-a-lifetime opportunity, and to be ready to go out and represent the United States.

ALEX FITZPATRICK:
A lot of these (GB&I) guys, if not all of them, have all played some form of match play before, so everyone is used to either playing foursomes or singles, and everyone is used to being in that environment, and I think that’s what’s good about our team is that we’ve all played that, and I feel like some of the Americans just haven’t been in that format and obviously playing foursomes together. 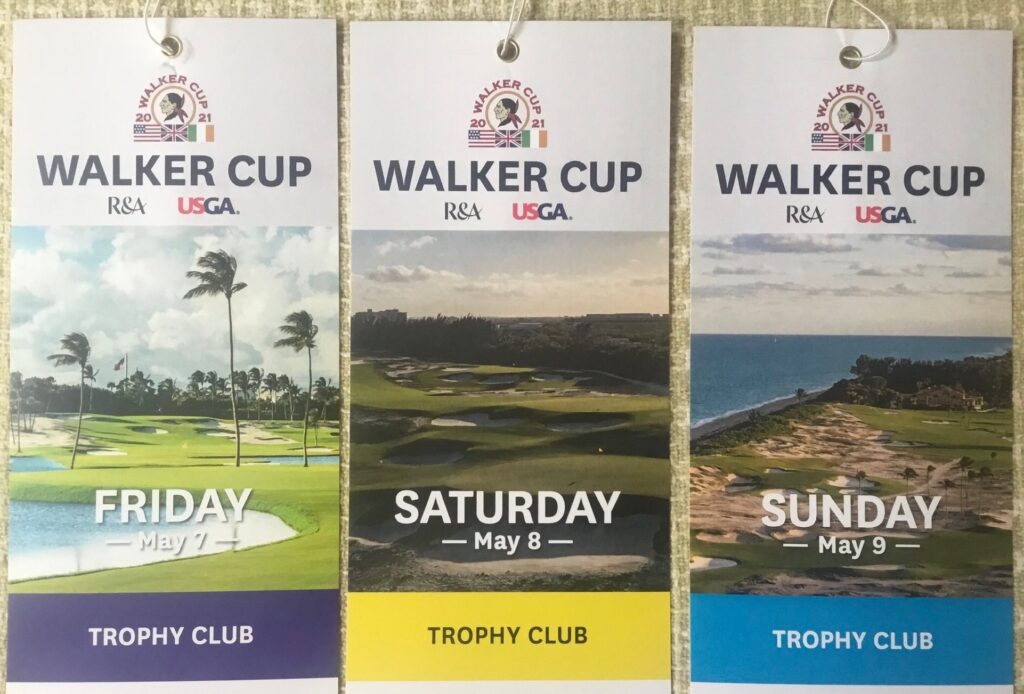 JOHN MURPHY:
There’s obviously a lot of tricks out there. The greens are fairly slopey and wouldn’t be anything like what we’re used to, so we’re just going to try to get a feel for that. We’ve got two days left; I think we’ve put in some great practice so far, so we’re all just getting ready for that first tee shot on Saturday morning.

(The greens running at 14 on the stimpmeter) is certainly going to add an element of excitement I would say. None of us are used to it. I’d say a lot of Tour pros aren’t even used to it, and then adding wind on top of that slope and green quickness is going to be pretty interesting. Might be a bit of carnage out there at times, so looking forward to that, as well, and hopefully we can manage it to the best of our ability.

STUART WILSON:
It’s a second-shot course. You’ve got to be really smart with your approach shots into the green. It has been windy every day we’ve been here. It’s been pretty much the same wind for all the practice days so far, so they’re getting to know it playing this way. There is talk of the wind having a complete shift over the weekend from one day to the next, so that will make it really interesting because we won’t have played it in that condition.

The greens are fast. Like lightning fast. But as far as playing the course, windy, a little bit firm. We’re not too unfamiliar with those kind of conditions, so the guys are coping with it pretty good.

ALEX FITZPATRICK:
Yeah, I love it here personally. I’ve been lucky enough to have been invited to play here a couple times, so I feel like I have got the experience of playing here a lot. It sets up great for me, and I know it sets up great for a lot of other guys on our team, and it’s a lot of bombs-away drivers really, which makes me a little happy.

COLE HAMMER:
Seminole is obviously one of the most well-known, and for a good reason, best golf courses in the world. I cannot think of a better course to play a Walker Cup match on. I mean, the strategy involved in it, the little intricacies around the greens, short game is vital. It’s just going to test every aspect of our game, and it’s in unbelievable shape right now, so kudos to the superintendent and his staff for getting it in this good of shape, especially after the rain we had last night. The golf course is going to hold up well, and it’ll be a big part of the storyline.

ALEX FITZPATRICK:
The torrential rain that happened yesterday was crazy. We couldn’t get out of our team room. We were stranded in there for about two hours, and we were looking out the window and seeing that the whole course was underwater. Being out there today we were spinning chips back and you could just tell that the course was just a little damp and I’d say it will make it a bit more for target golf, but at the same time that can be a bit dangerous with all the runoffs. Yeah, it’ll be interesting to see how much it’s affected play with what you prepared for at the start of the week and what today (Friday) has been.

STUART WILSON:
We know there’s only been two teams that have been successful over here, which shows it’s not impossible. But we’ve had a look at the numbers, and yeah, there’s been 310 (GB&I) Walker Cup players, 84 of those have played on winning sides but only 20 have played on a winning side in America. We’re trying to make that 30 basically.

STUART WILSON:
We’d never say we’re outsiders because certainly with the format of the match and how 18 holes of match play, everybody knows anything can happen at any time.

As far as kind of being up against it, you’re always up against it when you come, it doesn’t matter what school you generally play in, America is always going to be strong.

We’re going to have very, very few GB&I spectators here cheering us on, so we can use that to our advantage, as well, to kind of spur the guys on to not so much prove a point but use it as a motivation to do as well as they can.

ALEX FITZPATRICK:
Putting points on the board early is probably the most important thing you can do, making sure that the guys behind you can all see that you’re getting that blue on the board as early as you can and getting the points, and I guess just trying to rack up enough points to make sure that you win.

JOHN MURPHY:
Once that first tee shot comes around it doesn’t really matter who you are or what you’ve done, just a matter of going head-to-head with whoever you’re against, so yeah, we’re looking forward to that.

JOHN MURPHY (speaking on Thursday):
Yeah, there were a couple of us that have been unwell a couple of nights ago, but thankfully we’re all good now. Myself and Angus. I don’t know what it was to be honest with you. I think we’re both back feeling okay and ready to play some golf today, and get ready.

ALEX FITZPATRICK:
It’s a stomach bug, and I guess it’s gone around both teams. It’s a little bit of adversity to deal with, but I think it only lasts for 12 to 24 hours or something, so hopefully we have the full team back by tomorrow (Saturday).

I think it (started) around Tuesday or Wednesday. We had a couple of guys sort of fall ill and I guess we weren’t sure what it was to start with. It was weird, we had two guys from each team apparently go, and the next day we thought people would get better and then suddenly four guys were out.

COLE HAMMER:
It’s obviously unfortunate. All 20 guys have worked really hard over the last two years to make this team, and to kind of have an issue like this is no fun. But everybody is making the most of it. We’re pushing through, and we’re just kind of having to make some decisions on the fly here.

You know, it’s all been happening so fast that one guy goes down, the next guy goes down. But we’re all trying to rally around each other. But we’ll be just fine. I promise we’ll be ready to go tomorrow no matter what the deal is.

It’s now time for the talking to stop and the playing to start.