The opening day of the 47th Walker Cup match proved to be a positive one for the GB&I team who left Royal Liverpool G.C. pleased with their start but conscious that they had left points on the table which they may live to regret tomorrow.

The Day 1 matches were played in near perfect conditions. The sun shone for most of the day with a gentle north westerly breeze barely affecting ball flights. 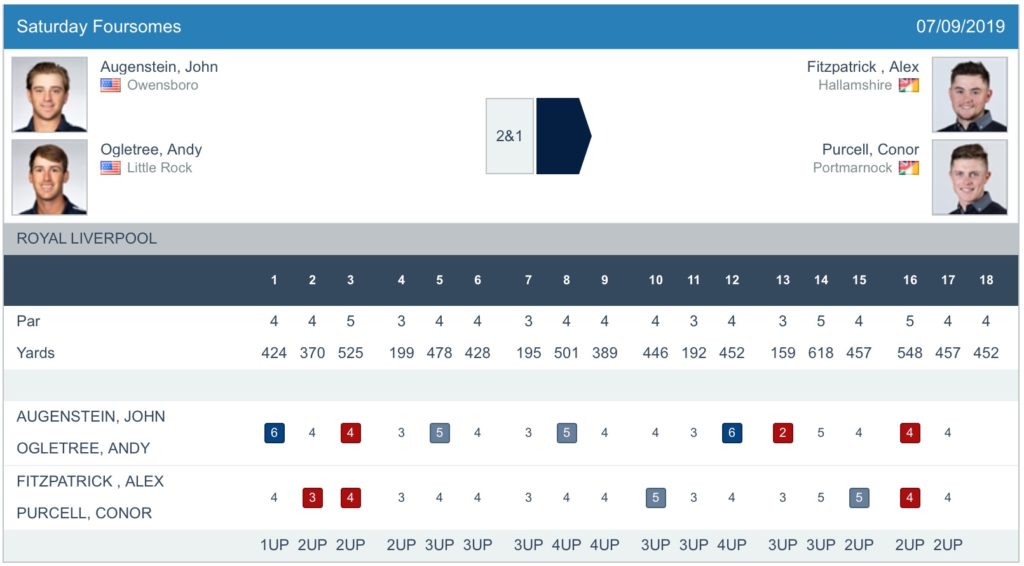 Alex Fitzpatrick and Conor Purcell delivered for GB&I in Game 1. Some outstanding putting and chipping from Purcell in particular led to a notable victory over the two recent U.S. Amateur Championship finalists. 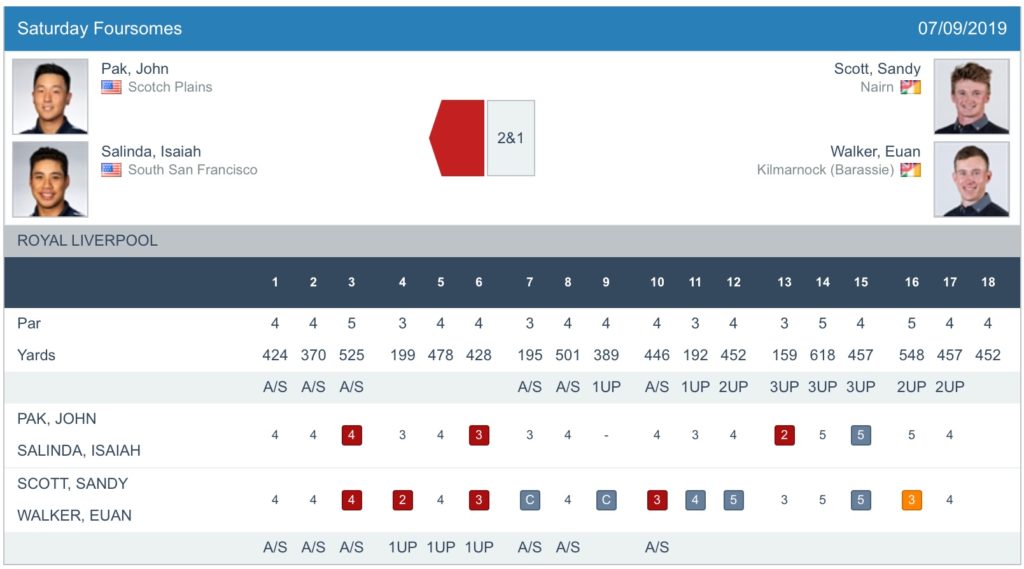 In Game 2 John Pak and Isaiah Salinda made few mistakes in their win against the strong Scottish pairing of Sandy Scott and Euan Walker who let this game get away from them around the turn. 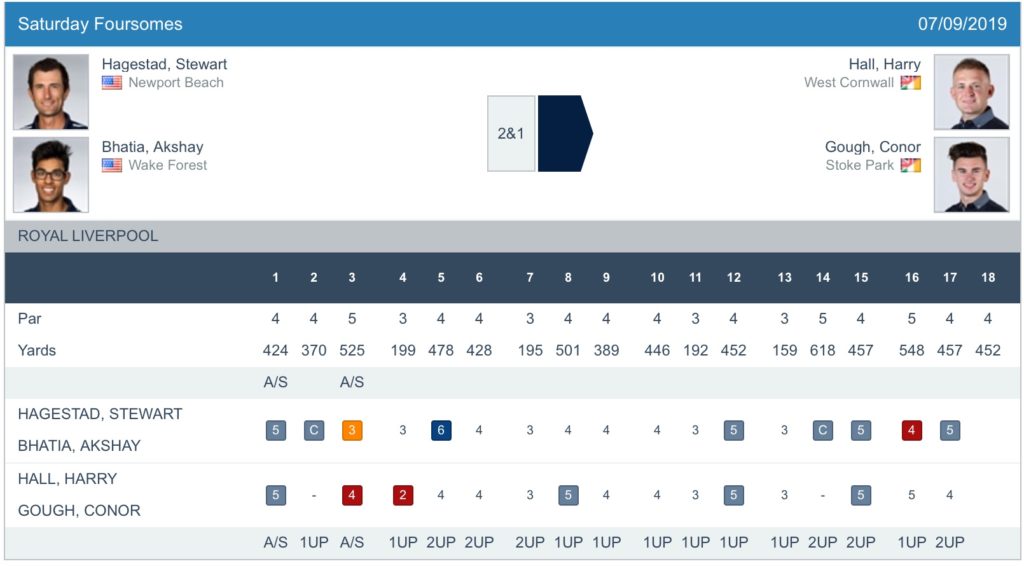 Without playing particularly well Harry Hall and Conor Gough were able to come through for GB&I in their match against Stewart Hagestad and Akshay Bhatia who started and finished the game poorly. 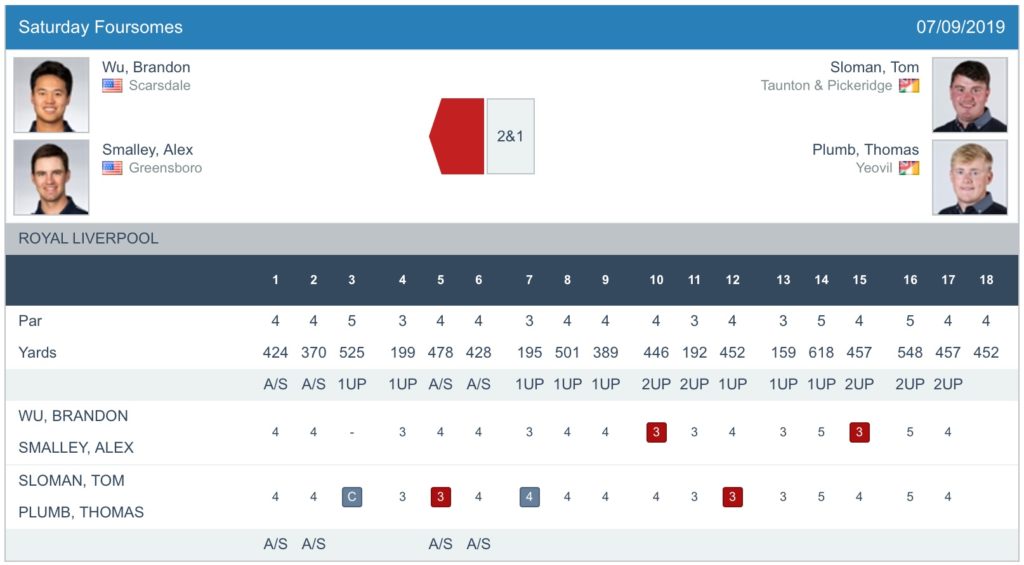 Alex Fitzpatrick had a notable victory against WAGR ranked world No. 1 Cole Hammer in a game of mixed quality. Hammer, who was not included in the morning foursomes, has struggled a little this summer and is clearly not at the same level as he was in 2018 when he was all conquering.

Euan Walker led Steven Fisk from the 2nd hole of their game and saw the match out but not without some nervous moments on the back nine. Again the above scorecard suggests that both players struggled on the links despite the near perfect conditions.

U.S. Amateur champion Andy Ogletree and in form Sandy Scott played a higher quality match in game 3. The tough start to the back nine along the coastline nearly derailed the Scotsman but he battled hard down the stretch to secure his first point.

In a game of few birdies John Augenstein took some revenge for his morning foursomes loss against Conor Purcell who was unable to repeat his earlier heroics on and around the greens.

John Pak won the final two holes against James Sugrue, who had been struggling with a sore back, to steal a point that had looked like being GB&I’s for much of the afternoon. His superb approach and birdie putt on the last certainly got him and the American supporters excited. Pak’s win was certainly a late confidence builder for the U.S. party. A 7-5 overnight deficit certainly felt a lot better than the 8-4 one they appeared to be on course for.

Conor Gough secured his second win of the day with a consistent front nine and thankfully a solid par finish on the 18th after it looked like he was perhaps going to gift a half to Isaiah Salinda.

Caolan Rafferty will be pleased to pick up a win in his opening contribution. Alex Smalley didn’t appear to push him too hard and rarely looked comfortable on the greens this afternoon.

It’s hard not to feel a little sorry for Tom Sloman who ended Day 1 with two losses but who arguably played better than anyone else on the GB&I team. Wu was unbeatable, completely in control of himself and his game, this afternoon. His scoring, even allowing was a conceded birdie on 12, was simply exceptional.

GB&I Captain Craig Watson said “It was a pretty good day. It could have been better, but we all knew the Americans were going to come back at us. I think the fact the Americans came in so close at the end could work in our advantage because we’ll be a bit more ready for the fight tomorrow. Everybody is well and looking forward to it.”

USA Captain Nathanial Crosby said: “I think we were a little slow in getting started this morning. But we fought hard to get back to all square going in to lunch. This afternoon I could not believe the amount of putts GB&I made in the first 45 minutes. I think John Pak winning his match maybe a turning point. We were pretty lucky to be 5-3 down when it looked like we could be 6-2 or even 7-1 down.”