Jim Nugent yesterday reported in Global Golf Post that the USGA had decided to soften their Mid-Amateur Selection Policy, starting in 2017.

The USGA adopted this approach in 2013, committing to including two mid-amateur (over 25 years old) players in all of their future Walker Cup teams.

However, with the prime instigator of this policy Tom O’Toole coming to the end of his term as USGA President, the pool of potential candidates diminishing all the time and recent results disappointing it appears a change has quietly been instigated.

In the period from 1973 to 2003 the US team included at least two mid-amateurs and sometimes as many as four so the formal policy introduction wasn’t a particularly earth shattering development in 2013. Having said that in 2005 there were no mid-amateurs and between 2007 and 2011 just one.

In the 2015 match at Royal Lytham 52 year old Mike McCoy became the third oldest competitor in the history of the contest when he joined Scott Harvey on the USA team.

Whilst well founded the inclusion of mid-ams hasn’t been much of a success in playing terms. They were W1-L5 at Lytham and are now W3-L8 since the formal policy was introduced in 2013.

The USGA are now said to be only committed to the inclusion of one mid-amateur for each future match. Any additional mid-amateur candidates will need to have proven themselves better than College alternatives in elite amateur competition throughout the selection period. 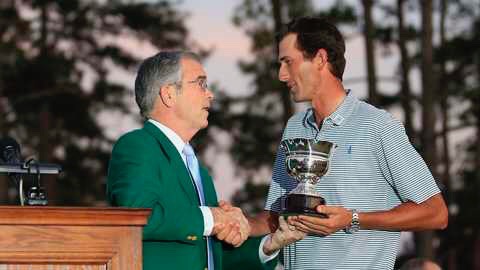 Following the conclusion of the 2016 U.S. Mid-Amateur Championship in September Stewart Hagestad (26) and Scott Harvey (38), the champion and runner-up, were initially the clear favourites to pick up the 2017 mid-amateur spots in the USA team. Both were included in the USA’s Walker Cup squad that met up in Los Angeles in December 2016.

With Hagestad (26) having picked up low amateur honours at The Masters in April 2017 he is unquestionably the USA’s No. 1 mid-amateur and as such appears a certainty for their 2017 team. He is committed to a full amateur schedule and interestingly has indicated he plans to play in both the Irish Open Amateur and The Amateur Championship this year.

Scott Harvey would therefore appear to be the man most under pressure as a result of this policy change. It is now clear that he will need to perform very well through the spring and summer if he is to make the team for a second time.