The main topic of conversation was how the R&A are finding it increasingly difficult to persuade players to stay amateur for long enough to reach their full potential and the knock on effects this is having on the selection of the GB&I Walker Cup team.

Burns, an Irish International in the 1970’s and ’80s, was quoted as saying: “They are going pro too early and they are ruining their lives.”

“The Walker Cup should be the ambition for them and while I know some of them will try for the first or second stage of the Q-School, the cost factor is prohibitive and they are simply not hitting the ball as well as pros yet, or playing as well as the pros yet”.

“And then there’s the pressure. Unless you play in front of 5,000 people at the Walker Cup, you are not ready. If you can handle that pressure, it’s another stepping stone in the right direction.” In looking ahead to the 2017 Walker Cup he went on: “We are hunting for the guys who have the savvy to control the pressure and get on with their game.” 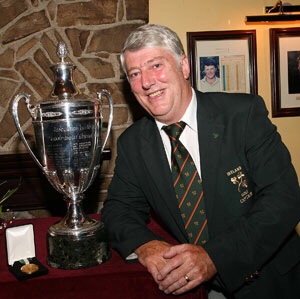 Whilst acknowledging that there have been and there will always be exceptions Michael Burns believes that the reality is that only those GB&I players who qualify for and then perform in the Walker Cup environment can really ever hope to make a proper living out of the pro game. “Look at guys like Daan Huizing, who won Lytham by 14 shots and the St Andrews Links Trophy by 11. He is still not making any money. But we have guys who are going pro after winning a minor championship – very minor – and standards are too high (for them).”

Like many other amateur golf commentators Burns is not slow to apportion blame: “I think the management companies have a lot to answer for. Too many promises being made to the guys…money, contracts, starts in this and that. They promote some of these mini-tours and bring guys on, if they do well. If they don’t do well, they get pushed back.”

Mr. Burns is right in saying too many players are turning pro that simply aren’t good enough. However, I also believe there is no right time to turn pro. Everyone is different both in terms of the development of their game and equally as importantly their personalities and mindset. As such what might be right for one person may be wrong for another. Of course there is only a limited number of players who can play in the Walker Cup too. The quality of ones decision making has always determined an individuals success in life. For a professional golfer this statement is perhaps even truer.

Thanks to Brian for catching up with Michael and sharing his views with us. An interesting article albeit the final paragraph, outlining how Jack HUME plans to turn pro after the World Amateur Team Championship in Mexico in a few weeks time, was not the ending I was hoping for.