Scotland’s Connor Syme has enjoyed a great 2016 clearly establishing himself as one of Great Britain & Ireland’s (GB&I) leading amateur golfers. It is therefore encouraging news for our 2017 Walker Cup hopes to hear him say he has no immediate plans to turn pro.

Connor started the year off superbly by winning the Australian Amateur Championship in Melbourne. He then proceeded to have 6 other top 10 finishes during the year, including at the African Amateur, Irish Amateur Open and the Scottish Open Amateur. 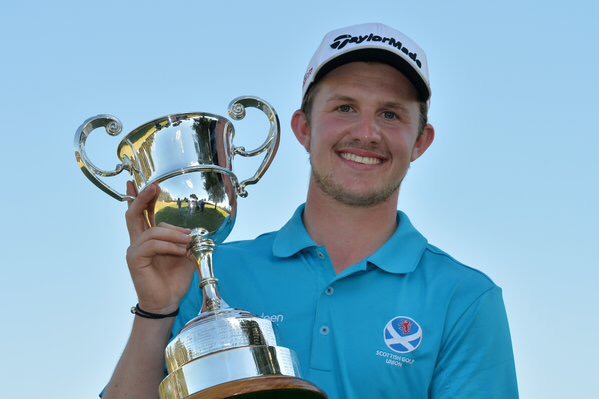 On the team front he was a member of the Scottish team’s that successfully defended their European Amateur Team Championship in France (W5/H1/L0) and competed in the Eisenhower Trophy in Mexico. He was also selected for the GB&I team that retained the St. Andrews Trophy in Kent.

Given the above performances it is no surprise that he has risen from 80th to 14th in the Scratch Players World Amateur Rankings during 2016. Only Sam Horsfield (5th) sits above him currently in the GB&I-only listing.

In an interview last week at the Australian Open in Sydney with John Huggan, who was working for ausopengolf.com, Conner said:

“My plan is to stay amateur for at least one more year, maybe two. I’m a little cautious of turning pro too early. There are things that I still want to achieve in the amateur game. It’s all part of the plan I’ve put together with my Dad (Stuart, the head professional at the Drumoig Golf Centre and Connor’s coach).”

“My good golf is definitely good enough to make me competitive. But some silly mistakes hurt me. The top guys don’t do that too often. I’ve still got to learn about how they think their way around the course.”

Interestingly Stuart Syme went on to say; “When he was 15 we wrote down a 10 year plan for his career and so far we have stuck to the script. The idea is to progress and get better, through all the inevitable peaks and troughs every golfer experiences. This year for example, the aim was to win a national title, which he did down here.”

“Look at Jordan Spieth. I’m not massively convinced he hits the ball better than Connor. But he manages his game way better. That’s where Connor’s focus is right now. And that’s why I want him to compete a bit longer at the top end of amateur golf. He needs to learn how to win and he can – right now at least – do that better as an amateur.”

“I look at it this way, Connor hasn’t gone down the college route that so many amateurs take. That’s a great apprenticeship but it wasn’t for him. He has two sisters doing five year academic courses and that’s what I feel Connor is doing right now. This is his university course. And by the time he is done he will hopefully be qualified to play at the next stage.”

Whilst everyone is different, to the outsider like me, the Syme’s Plan seems like a very sensible one. The policy of waiting until you are absolutely ready seems sound and certainly it would be a tragedy if a player of Connor’s quality was to miss out on a Walker Cup cap.