USA ran out 14-12 winners against GB&I in the 48th Walker Cup match played at Seminole GC in Florida. It was USA’s third consecutive win in the biennial contest.

The USA’s narrow advantage was primarily secured due to the efforts of 20-year-old Ricky Castillo and second time Walker Cupper Cole Hammer. Castillo was unbeaten becoming just the seventh player on either team to post four wins in a single Walker Cup match this century. Meanwhile Hammer, the University of Texas junior standout, won three and halved one of his games.

From GB&I’s perspective Matty Lamb, Mark Power and Jack Dyer put up the most resistance, all taking the fight to the Americans. Perhaps critically Alex Fitzpatrick, their highest ranked player and the only one with Walker Cup experience, lost all four of the games he played in. 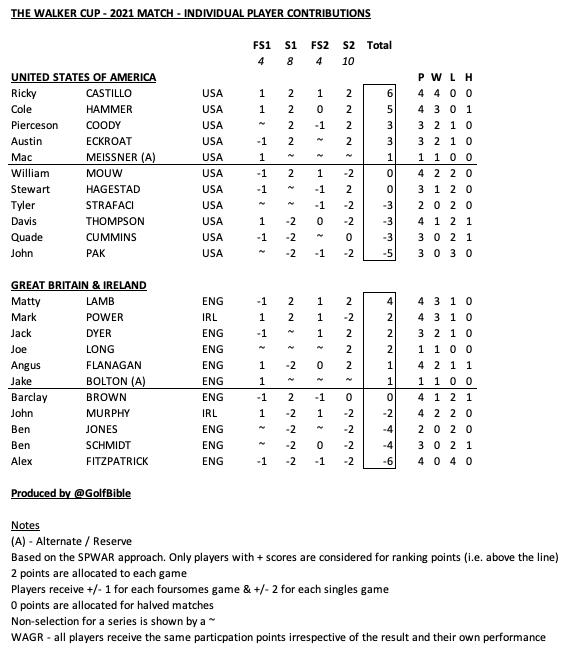 Sunday saw great playing conditions with temperatures peaking in the mid 80°’s. The wind was slightly stronger than yesterday with gusts as high as 22mph seen.

The Irish pair made a great start to their foursomes game on Sunday, opening with two birdies and an eagle to a take a 3Up lead. It was a lead they held until the 17th, the par 3 whose green has proven almost impossible to hold throughout the match. As has happened more often than not to date USA were able to get up and down whilst GB&I were not. Nevertheless Power and Murphy were not to be beaten, the former hit the 18th fairway before Murphy hit a clutch 5 iron to the heart of the green. After Coody missed the green left, rolling down the steep incline on to the range, the best they could do was a 5. Power judged his 20 foot downhill putt to perfection to enable GB&I to pick up the first point of the day whilst also maintaining his 100% record.

Taking his individual record to P3-W3 Ricky Castillo is proving to be the surprise star man for USA at this Walker Cup. The Yorkshire pairing of Fitzpatrick and Brown did well to fight back having gone 3Down after six holes. Unfortunately having taken a 1Up lead on the 16th Fitzpatrick missed both the 17th green and 18th green and despite excellent recoveries by his partner was unable to hole putts to save the day when it was most required.

If GB&I do go on to make a real match of this in the Singles later today it will be this Foursomes that will be seen as the turning point. 3Down with four holes to play most observers had already given the point to the American side. However, Flanagan and Schmidt had other ideas and a storming finish saw them miraculously secure a half. It must be said that the Americans found really poor lies on the final two holes but it is one thing having a bit of luck, it’s another to be good enough to take advantage of it. Flanagan’s bunker shot and pitch on the final two holes were top class in this regard.

GB&I’s Lamb and Dyer pairing, who had lost on the opening day, played beautifully this morning to thrash Hagestad and Strafaci by 6&5, the biggest winning margin seen in the match to date. I am confident the four birdies and no bogeys in their opening 13 holes would have been too good for any of the American pairings.

In another tight Foursomes series GB&I will be delighted to have come out on top. With a number of the American players looking nervy down the stretch this morning and their lead now reduced to just 1-point it’s certainly all to play for going into the final 10 Singles.

A disappointing finish to the match from Kilkenny’s Mark Power who had previously been unbeaten. Perhaps mentally and physically exhausted after his earlier exertions the fresher Austin Eckroat, who was rested in the morning, got off to a good start and to his credit kept pushing with some very solid play.

Pierceson Coody was too good for Alex Fitzpatrick for the second day running. Whilst the Englishman, who has now lost all four of his games, battled to the end he was found wanting down the stretch with a number of mistakes that enabled Coody to see the match out in relative comfort.

2up with two holes to play the reigning Amateur Champion Joe Long made hard work of securing GB&I’s first point in the Singles. It took an unbelievable 18th hole for the Gloucestershire man, playing in his only game of the match due to illness, to secure his point. Having won the 17th Pak confidently hit the middle of the 18th fairway. In reply Long duck hooked his into the shoreline cabbage. Having taken a drop he then found the green side bunker in three. With a half virtually in his hands Pak misjudged the wind with his won approach and found the lateral hazard to the left of the green. Having taken a drop the experienced American then duffed his chip into a bunker before taking three to get down. A disbelieving Long gratefully secured a half in six to take the point for GB&I. If only Long had been able to play a few mores sessions wondered the GB&I supporters.

Matty Lamb won GB&I’s second point in the Singles with an impressive win over an out of sorts Davis Thompson. His magnificent tee shot and birdie on 17, the hardest hole on the course, and controlled par on 18 should give him a great deal of confidence for his future career in the pro ranks. Lamb was one of the few GB&I players to look comfortable in these rarefied surroundings, largely in control of both himself and his game throughout.

A half was arguably the right result in this close game albeit Brown who had won three holes in a row from the 15th to take the lead on the 17th will be disappointed to have given up a full point with a bogey on the last. Nevertheless the Stanford player should be pleased with his unbeaten Singles record over the weekend.

Despite holding the the lead throughout his match against the competitive William Mouw Angus Flanagan had to dig deep to finally get the job done. 2Up with two to play he needed a clutch 35 foot par putt on the home hole to close out the Californian.

Ricky Castillo finished the match as the only player to record a 100% record, played 4, won 4. Like his compatriot Mark Power, Murphy look spent from his earlier exertions. He quickly handed Castillo the advantage in the opening holes and never really looked like being able to turn it around against an opponent playing with confidence and freedom.

Jack Dyer made it two wins out of two on Sunday with a memorable win against the 2020 US Amateur champion. Tyler Strafaci reported that he had lost 15lbs as a result of the virus in the last few days. The Essex player, who only made the starting line up when Sandy Scott withdrew due to injury, took control early in the back nine. However, despite being 3Up with four holes to play it looked like he would end up halving after losing both the 15th and 17th and then hitting a poor tee shot on 18. Thankfully he was ultimately able to scramble a half in bogey to seal the full point.

Having lost to Ricky Castillo by 5&3 in the Saturday Singles Ben Schmidt was again soundly beaten; this time 4&3 by Cole Hammer. As the scores below show Schmidt doesn’t appear to have played that badly but Hammer was simply at his imperious best. 18 year old Schmidt’s lack of experience and recent competitive play was always going to make this Walker Cup a tough ask for him.

Despite being handed the early initiative Ben Jones sadly lost his way on the back nine against Stewart Hagestad who was clearly determined to contribute at least one point to the USA team’s cause in his third Walker Cup match. Like Schmidt in the preceding game Jones looked undercooked. Perhaps the virus that had hit them both particularly badly meant they were simply unable to summon the fight that is normally required to be competitive at this level.